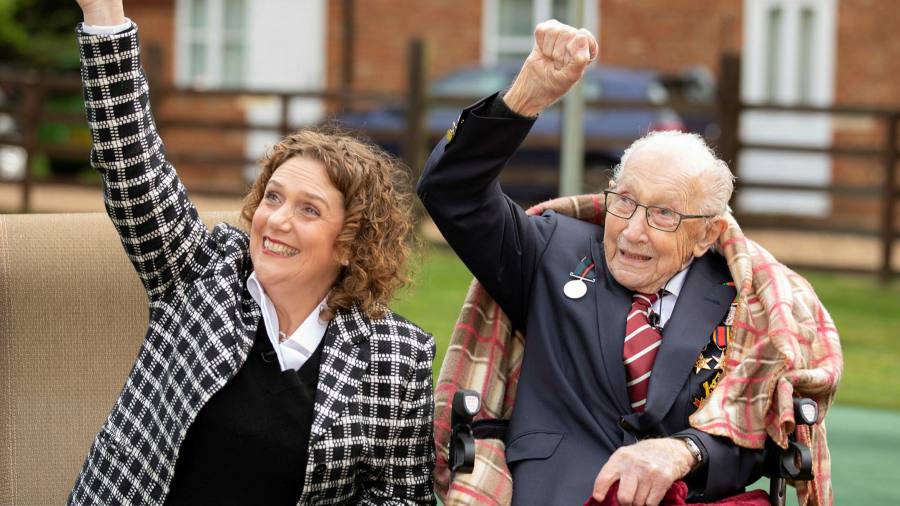 A statutory inquiry has been launched into a charity linked to the late Captain Sir Tom Moore, a British war veteran who was lauded as an inspirational fundraiser during the coronavirus pandemic.

The Charity Commission watchdog announced on Thursday it would investigate The Captain Tom Foundation after it identified concerns about the organisation’s management, particularly its independence from the family of Moore.

When aged 99 the former army officer received international attention walking 100 laps of his garden in aid of the NHS, which raised £38mn. He was knighted by the Queen for his charity efforts. Moore died from Covid-19 in February 2021 at the age of 100.

The Captain Tom Foundation was registered on June 5, 2020 following Moore’s initial fundraising efforts with the stated aim of “the advancement of public health and wellbeing”.

But the watchdog raised concerns about links between The Captain Tom Foundation and Club Nook Limited, a company controlled by Moore’s daughter Hannah Ingram-Moore and her husband Colin Ingram-Moore.

The commission said it was looking at whether a failure to consider intellectual property and trade marks issues when the charity was established had given Club Nook an opportunity to trade mark variations of the name “Captain Tom” without objection from the charity.

Hannah and Colin Ingram-Moore said in a statement: “The £38mn raised by the late Captain Sir Tom Moore, and donated to a separate charity, NHS Charities Together, prior to the formation of The Captain Tom Foundation is not part of the scope of this inquiry.”

We do not take any decision to open an inquiry lightly, but in this case our concerns have mounted.

It added that Club Nook Ltd made its application for various trademarks in April 2020 prior to the formation of The Captain Tom foundation, and that neither Hannah nor Colin Ingram-Moore were trustee directors of the foundation upon its formation.

Helen Stephenson, chief executive of the Charity Commission, said: “The late Captain Sir Tom Moore inspired the nation with his courage, tenacity and concern for others. It is vital that public trust in charity is protected, and that people continue to feel confident in supporting good causes.”

She added: “We do not take any decision to open an inquiry lightly, but in this case our concerns have mounted. We consider it in the public interest to examine them through a formal investigation, which gives us access to the full range of our protective and enforcement powers.”

In response to the investigation being launched, Stephen Jones, chair of the board of trustees of The Captain Tom Foundation, said it would “work closely” with the commission over its concerns.

Jack Gilbert, the new chief executive of the charity, said that the organisation was undertaking “an important period of transformation”.

He added: “With a revitalised and more focused mission, in coming months we will be announcing an array of charitable activities at both grassroots and national levels that change the way we think, feel and act towards age and ageing.”

The Charity Commission’s investigation will consider whether the trustees of the charity were responsible for any mismanagement and misconduct of the foundation, including potential unauthorised private benefit, for example, any conflict of interest between the charity and Ingram-Moore family.

The watchdog has previously investigated the foundation’s decision to employ Hannah Ingram-Moore for £60,000 per annum for three days a week work. The foundation later requested to pay her salary £100,000 in a full-time role, but was rejected by the regulator. She was also temporarily allowed a £85,000 a year salary for full-time work until a CEO was recruited.