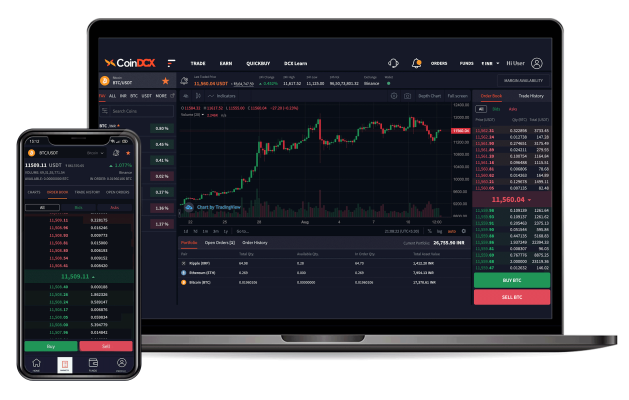 CoinDCX has raised $135 million in a new oversubscribed round at a valuation of $2.15 billion, it said today, as the Indian cryptocurrency exchange looks to aggressively expand its product offerings and talent base, including some to double down on compliances in the world’s second largest internet market.

The startup, the first Indian crypto firm to attain the unicorn status last year, says it has amassed over 10 million users. In addition to allowing users to buy various tokens for as low as 100 Indian rupees ($1.3), CoinDCX also provides margin trading and the option to stake digital assets.

“What is interesting about this round is the quality of investors who’re coming in and the kind of strong confidence they have shown on the market,” said Sumit Gupta, co-founder and chief executive of CoinDCX, in an interview with TechCrunch. “It gives a good boost to the overall industry.”

The startup’s new funding comes weeks after New Delhi’s crypto taxation rule — 30% on the income — went into effect. The rule, which also includes a 1% tax deduction at source for each trading, has significantly impacted all crypto exchange’s trading volumes in the country, according to publicly available trackers.

Gupta confirmed that CoinDCX has also been hit by the recent move, noting that the 1% TDS has made it somewhat less feasible for some high-frequency traders to go about their business. (Such traders make a large portion of the trading volumes.) “We continue to see new users come to the platform, but the growth is not as high as it used to be, say, two months ago,” he added.

The startup plans to double down on its compliance efforts, he said. “We will do whatever it takes to give more comfort to the regulators,” he said.

CoinDCX, which also counts Tiger Global and B Capital among its backers, is also working to ramp up educating the retail investors and help contribute to broadening the local ecosystem, he said. The startup will populate its eponymous app with educational content and byte-sized videos, Gupta said.

As for the new product offerings, CoinDCX recently introduced a new plan that allows individuals to keep investing a certain amount every few days. The feature is aimed at helping people understand and build a habit of making long-term and disciplined investments. More than 100,000 individuals are already using the offering, which was unveiled late last month. “So we will keep on adding more,” he said.

Some offerings that you can rule out seeing on CoinDCX include wealth management opportunities such as mutual funds and stocks. Gupta said crypto remains the singular focus for CoinDCX. “As a company, we are excited about a category that is the future. We will continue to double down on crypto and not explore areas that are already solved,” he said.

CoinDCX is also planning to considerably ramp up its workforce. The startup, which currently employs about 400 people, plans to have 1,000 people by the end of the year.

“This is a problem, I as a founder, experience a lot. There’s a lack of talent pool. There are limited number of people who have experience of working in the crypto space. How can we built a sort of mechanism, where more and more gain understanding and contribute to the ecosystem,” Gupta said.

The exchange, one of the largest in India and which also helps power the orderbook of rival Andreessen Horowitz-backed CoinSwitch Kuber (valued at $1.9 billion), is also exploring building a ventures arm, as is popular among other global exchanges such as Coinbase, FTX and Binance, Gupta said, but it’s not something CoinDCX is planning to launch anytime soon, he suggested.

“We have the right infrastructure and distribution, it’s very much on the cards,” he added.

“We have long been impressed by CoinDCX’s vision to build a thriving Web3 ecosystem in India and it has been our pleasure to support the team’s execution in building the most customer-centric and feature rich crypto exchange in India following our initial investment in 2021,” said Ravi Mehta, managing director of Steadview, in a statement.

“We are excited to now deepen our investment to fuel the growth of one of the most loved Web3 companies in India.”

Unlike Binance, which has its own token, called BNB, and FTX, which runs FTT, CoinDCX is not looking to introduce its own native token, Gupta said. “We don’t want to launch a token for the sake of it. Token is generally useful when you want to get the network effects faster. It’s something you try to solve massive adoption early on. I think we’re already doing pretty well. We are very cautious about each new feature or product we introduce as it’s an irreversible thing. I have been telling the team, for example, if we do something, we need to do it right,” he said, pointing to exchanges such as Coinbase and Kraken that don’t have their own tokens.

CoinDCX recently partnered with crypto-native trade surveillance and market integrity players such as Solidus Labs and Coinfirm, to strengthen its anti-money laundering protection and to provide “precise and holistic” detection and reporting into suspicious activities. These partnerships, the startup says, will enhance CoinDCX’s compliance with the Financial Action Task Force’s (FATF) recommendations.

The climate solution beneath your feet