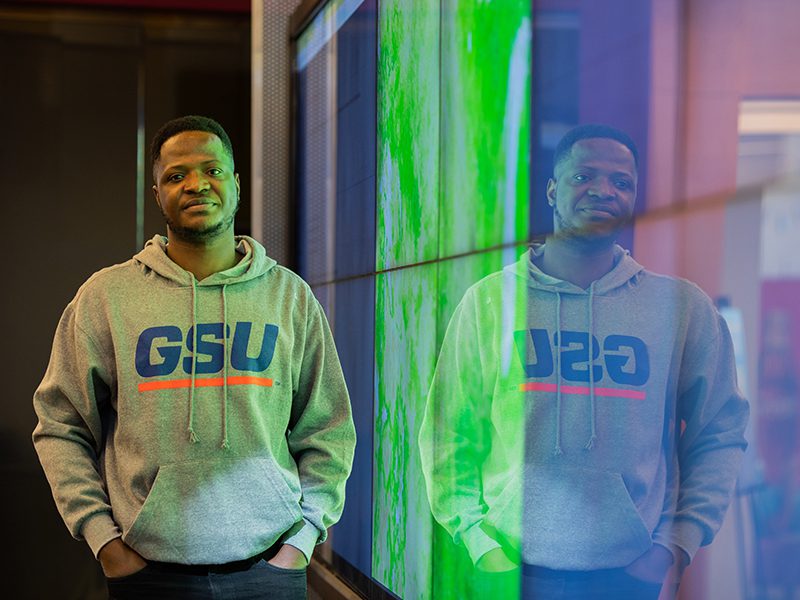 Kolawole Arowoogun sits at his computer, intently reviewing what appear to be detailed paintings, shining various shades of color against his face. Some images are orange with patches of white, while others are neon green.

What Arowoogun is actually looking at are images of Earth, taken from NASA satellites orbiting the planet. Arowoogun, a master’s degree student in geosciences at Georgia State University, is studying these images because they may unlock answers to health and environmental concerns related to wildfires.

“Working on this project means a lot to me,” said Arowoogun, who is conducting the research as an intern with the NASA DEVELOP program.

“This is something that could have a great impact on the ecological system of America,” he said. “I find this experience very exciting, and I’m grateful to be a part of it.”

The DEVELOP program’s mission is to extend NASA Earth science research to benefit society, and to provide training and development to its participants, according to the agency.

The goal for Arowoogun and his research group is to develop management strategies to mitigate the increase in wildfires occurring in the Western United States due to drought and other environmental problems.

Arowoogun analyzes different types of satellite data that track land use and document changes due to climate change, urbanization, drought and wildfires in the pinyon and juniper tree habitats in the Grand Valley region of Colorado and Utah.

“If we can better understand how these issues are connected, we can help prevent future occurrences of wildfire in the United States,” Arowoogun said.

Since the 1980s, the area burned by wildfires in the United States each year has increased significantly. Of the 10 most active wildfire years on record, in terms of the number of acres burned, all have occurred since 2004, according to National Interagency Fire Center data.

“Drought in the area makes the environment more susceptible to wildfires,” Arowoogun said.  “Beetles in the area also suck the nutrients from the trees and dry them out. Because the trees are so dry, any little thing could ignite a fire.”

Arowoogun will work with NASA through the spring. Once he finishes his master’s degree, he plans to go on to pursue a Ph.D.

Eventually, he hopes to take the technical and professional skills he’s learned at NASA and apply them in his home country of Nigeria. Arowoogun moved to Atlanta in December 2020 to attend Georgia State.

“I knew if I came to the United States, I could receive training that may not be available back home,” Arowoogun said. “My experience could translate to a better world for those in my home country and in the United States.

“I would love to work for an organization like NASA or the United Nations as a researcher. I’m thankful for experiences like this because it has given me the foundation to access future possibilities.”

Review: Coro Vocati returns with a reminder that art brings light to the dark