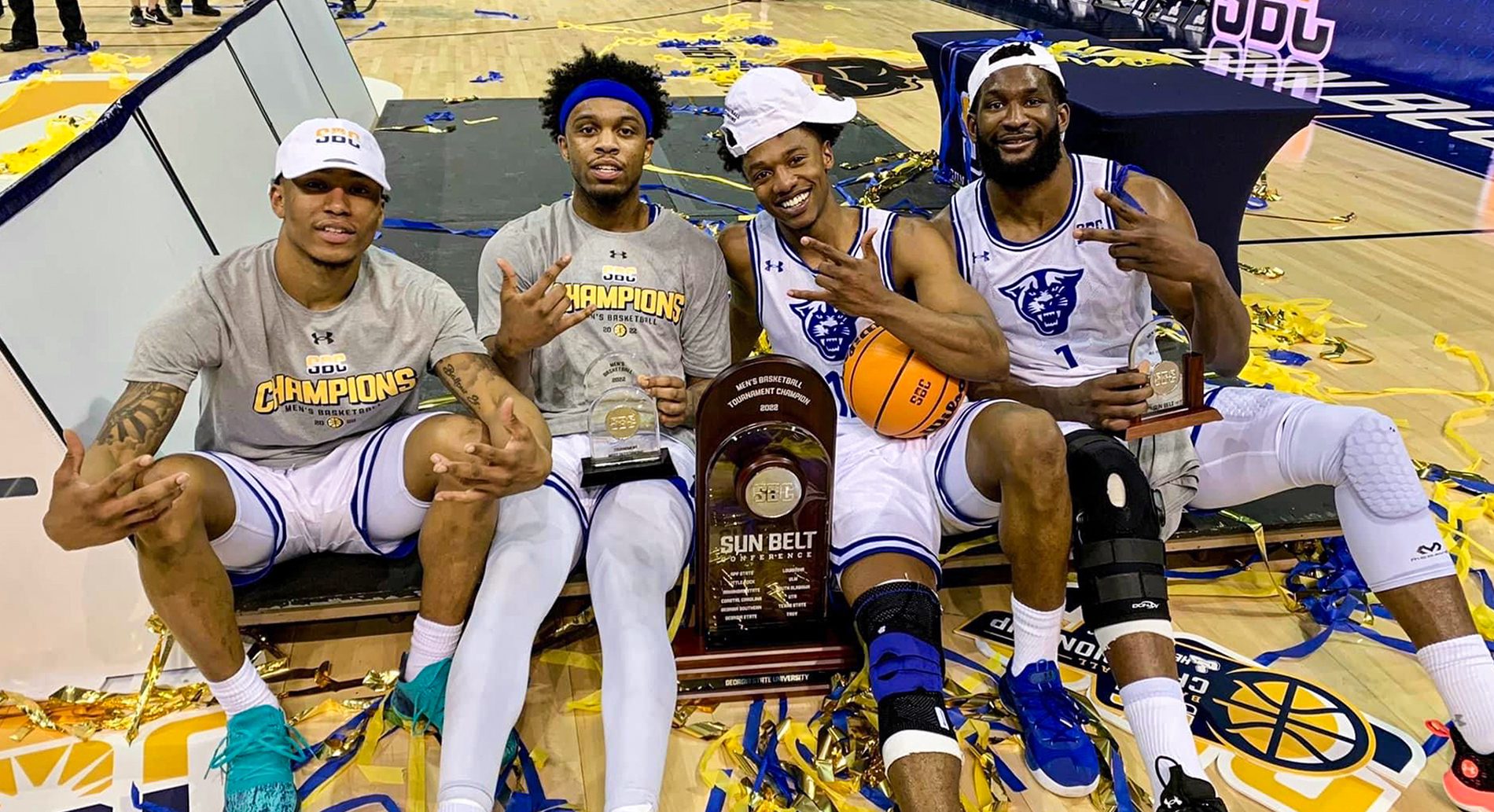 GAME CHANGE
Allen and Roberts are 23 years old; Williams is 22 and Nsoseme is 24.

Allen leads the team in scoring (14.7 points per game) but sounds just as pleased by his evolution on defense. His hands are more active, and he’s averaging eight deflected balls per game.

“There are so many other plays you can make in a game that don’t involve shooting the ball,” Allen said. “That’s one area where I’ve really grown — the deflections, setting up teammates for shots and getting my hands up when I close out on a shooter.”

You can also see Allen’s cunning on the court on offense when he is closely guarded. A defender will be on his hip, so instead of trying to get away by going to the 3-point line, Allen will curl tight around a teammate’s screen to hold off the defender. It’s a veteran’s savvy.

Williams is the Georgia State career-leader in games played (148) and holds five other career records. He talks about how he’s learned to read defenses. It was his deflection and steal with five seconds left in the first-round Sun Belt Conference Tournament game against Arkansas State that sealed a 65-62 victory.

“There have been plays like that over the years when I wished I had gone for the steal,” Williams said of his game-winning move against Arkansas State. “I was ready for that one.”

Williams is the “floor general” and “the loudest communicator on the team, defensively and offensively,” he said.

“I have to communicate to my guys and make sure everybody knows we’re on the same page,” Williams said. “The coaches have been trying to get me to get loud for two years.”

Roberts averages 11.2 points, 3.1 rebounds and almost three assists per game. He leads the team in 3-point field goal percentage. The 5-foot-10 guard has started every game for the Panthers since he transferred from DePaul University.

“When I first came into the program, I focused on just being good enough for myself,” he said. “The game has slowed down for me now, and I think about the team and what I need to do for the team.”

Nsoseme is the emotional catalyst for the Panthers, which he certainly showed in his locker room plea. But it’s his work around the hoop that is more indispensable. He averages close to a double-double (9.4 points and 9.8 rebounds) each game.

There was one other crucial turning point for the team: Williams was back home in Douglasville, Ga., and texted Allen several days after the 2020-21 season ended with a heartbreaking loss against Appalachian State in the conference championship game.

“Trying to go back at it again?” Williams wanted to know.

Roberts, Allen’s roommate, got the next text.

Nsoseme, whose career started at the University of Cincinnati, was returning, too.

Listen to the Panther Insider Podcast, hosted by the Voice of the Panthers Dave Cohen (B.A. ’94), featuring the four seniors and Head Coach Rob Lanier.