This is Your Brain on Salt 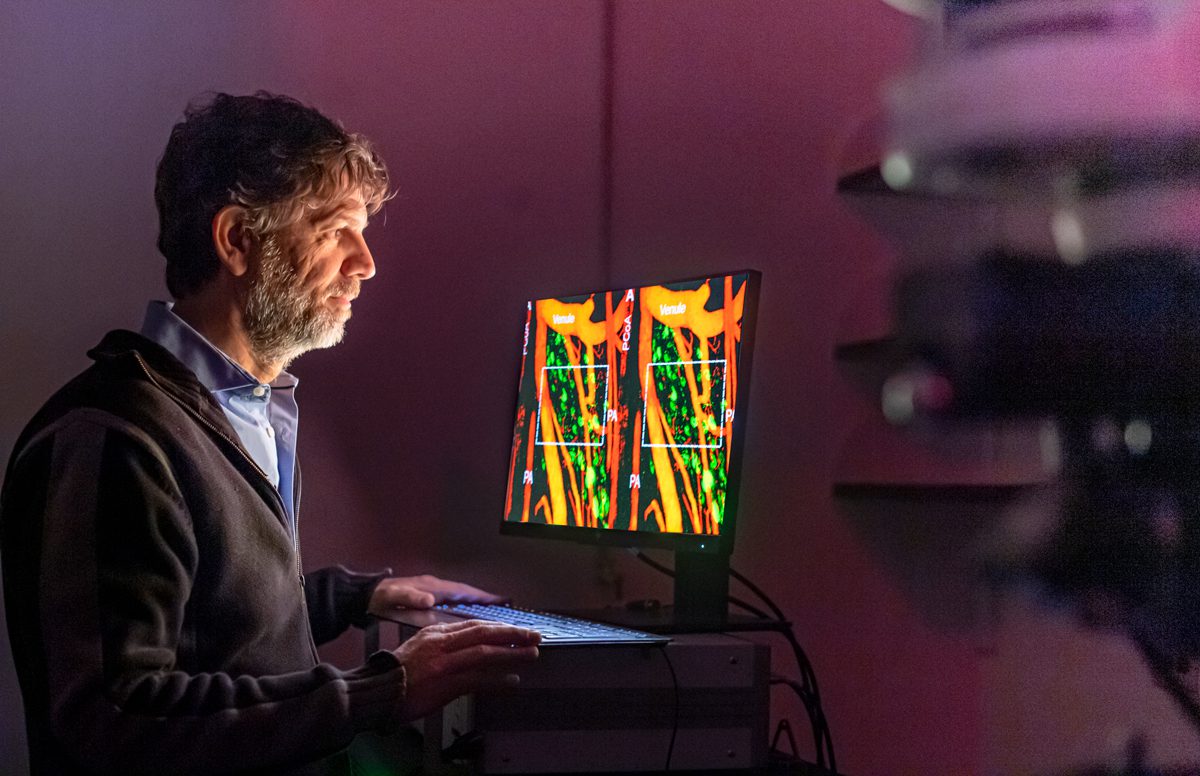 In recent years, scientists have come to discover that inflammation in the brain, also known as neuroinflammation, plays an important role in the development of health problems like obesity, high blood pressure and high cholesterol — which are in turn risk factors for major chronic conditions. As the founding director of Georgia State’s Center for Neuroinflammation & Cardiometabolic Diseases, Distinguished University Professor Javier Stern is working to uncover the mechanisms behind these inflammatory processes and how they contribute to diseases ranging from diabetes to Alzheimer’s.

In a first-of-its-kind study published last fall, Stern and his team used a novel technique to uncover how salt intake affects blood flow deep in the brain. Ninety percent of Americans over the age of two consume too much sodium, according to the Centers for Disease Control and Prevention. Your body responds to a high-salt diet with a number of compensatory changes, many of which are poorly understood. These include changes in the brain, which, as Stern has found, may be linked to high blood pressure and even neurocognitive issues.

“This research is an important step in understanding how bodily homeostasis is regulated in the face of salt intake,” says Stern. Here, he shares why the new findings could lead to important breakthroughs in the treatment of cardiometabolic diseases.

What exactly is neuroinflammation?

Neuroinflammation is a process that involves abnormal interactions among various cell types in the brain, including neurons and glial cells, which provide physical and metabolic support to neurons,  and nearby blood vessels in the brain. We have several research projects aimed at understanding the specific mechanisms and signaling molecules by which these brain cells communicate to each other. There are so many unknowns about how the brain functions in a “normal” state, and we believe this information is critical to understanding how things then can go wrong in disease states.

We also have studies underway assessing neuro-glial interactions in brain areas involved in cognitive and mood functions, such as the hippocampus and the amygdala, and in various animal models of cardiovascular disease, such as obesity and heart failure following an ischemic heart event.

Your recent study focused on neurovascular coupling. Can you explain what that is?

When neurons are activated, it typically produces a rapid increase of blood flow to the area. This relationship is known as neurovascular coupling., and it is regulated by chemical signals that arise from multiple cell types in the brain, including neurons, glial cells and endothelial cells (cells lining the blood vessels). Normally, we expect that when neurons become active in response to a stimulus, blood flow to the area will rapidly increase via dilation of blood vessels. Functional magnetic resource imaging (fMRI) is based on the concept of neurovascular coupling: experts look for areas with changes in blood flow to study activated brain areas and to diagnose brain disorders.

You and your team looked at neurovascular coupling in deep brain regions. Why is it important to home in on what’s happening there?

Prior studies of neurovascular coupling have been limited to superficial areas of the brain (such as the cerebral cortex), mainly because that’s all we could see. Previously researchers have also examined how blood flow changes in response to stimuli coming from the environment, like visual or auditory stimuli. We still know very little about whether the same principles apply to deeper brain regions attuned to stimuli produced by the body itself. Our study was focused on the hypothalamus, a deep brain region involved in critical body functions including drinking, eating, body temperature regulation and reproduction.

How did you manage to penetrate these deep regions?

We implemented a new surgical approach that enables us to access the ventral (base) surface of the brain, including critical regions of the hypothalamus, in an entire living organism (in this case, lab rats). We then used state-of-the-art neuroimaging to see — for the first time ever — how specific neurons within the hypothalamus interacted with nearby blood vessels when the rats were given salt.

We chose salt because the body needs to control sodium levels, and its effect on the concentration of dissolved particles in the blood (known as blood osmolality), very precisely. We even have specific cells that detect how much salt is in your blood. When you ingest salty food, the brain senses it and activates a series of compensatory mechanisms to bring sodium levels and osmolality back down.

The results were not what you expected. How so?

We did not see the classical neurovascular response, which is dilation of local blood vessels and increased blood flow in response to brain activity. Instead, the opposite occurred — the blood vessels in the hypothalamus constricted following salt intake. We called this “inverse neurovascular coupling” because it resulted in a decrease in blood flow and a decrease in oxygen supply (known as hypoxia) to the area. This is particularly surprising because in superficial brain areas like the cerebral cortex, reduced blood flow is normally observed in the case of tissue damage in diseases like Alzheimer’s or after a stroke.

The question is: Why did it occur? We have a theory, which has to do with the fact that when we eat a lot of salt, our sodium levels stay elevated for a long time. We believe the hypoxia is a beneficial mechanism that strengthens brain cells’ ability to respond to the sustained salt stimulation, allowing them to remain active for a prolonged period. This would also explain other differences that we observed. In the cortex, vascular responses to stimuli are very localized and the dilation occurs rapidly. In the hypothalamus, the response was diffuse and took place slowly, over a long period of time. 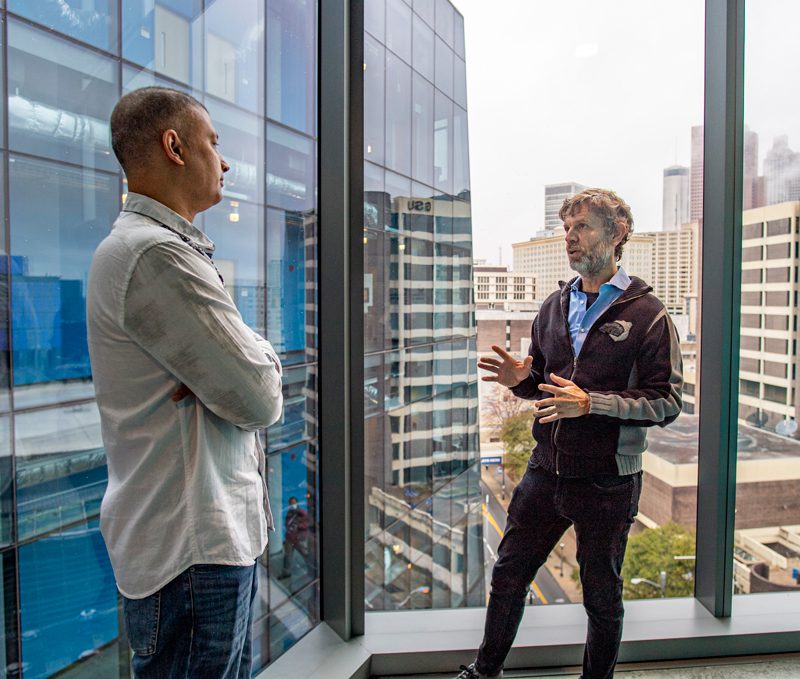 Many Americans suffer from high blood pressure, which is closely linked to high dietary sodium intake. What are the clinical implications of your findings?

While our study found that beneficial, short-term hypoxia can occur because of salt intake, we speculate that a prolonged or chronic high-salt diet — which is typically associated with high blood pressure — would cause a more pathological form of hypoxia. In this case, it could lead to overstimulation of neurons that produce the hormone vasopressin, which prompts our bodies to hold onto more fluid and increase blood pressure. This could in turn contribute further to hypertension. We hope our findings could help scientists devise a new, alternative therapeutic approach for salt-dependent hypertension.

We also know that the incidence of neurodegenerative diseases that involve both cognitive and mood deficits (like Alzheimer’s disease and other forms of dementia) are much more prevalent in people with underlying cardiometabolic diseases, including high blood pressure. Learning more about how neurovascular interactions occur and are regulated in brain regions involved in cardiometabolic control is fundamental to understanding how neurodegeneration ensues in these conditions.

The work you’re doing draws on several disciplines, including neuroscience and psychiatry. How important is collaboration?

Collaboration is absolutely critical. The successful implementation of this work was only possible thanks to our excellent team of collaborators, particularly Ranjan Roy, a postdoctoral fellow in our lab; Jordan Hamm, assistant professor in the Neuroscience Institute; Jessica Filosa, professor at Augusta University; as well as international colleagues, including Colin Brown from Otago University in New Zealand. All of these collaborators were highly instrumental in developing and implementing this novel experimental approach.

You recently received a $2.6 million grant from the National Heart, Lung and Blood Institute to continue this work. Can you discuss what you’ll be doing?

I’ll be working with Ranjan Roy and Jessica Filosa to further explore how chronic ingestion of salt produces hyperactivity of vasopressin neurons, leading to constriction of blood vessels and increasing our risk for cardiometabolic diseases like high blood pressure and heart disease. We are testing the hypotheses that neurodegenerative conditions observed in cardiometabolic diseases involve two major pathological processes, which could be acting in concert: neuroinflammation and hypoxia.

What other projects are you working on related to cardiometabolic health?

This concept of the “gut-brain axis” — or crosstalk between the gut and the brain — is a rapidly evolving and growing area in the neuroscience field, and a topic we are also very interested and invested in. There is already a body of evidence indicating that changes in the gut microbiota can lead to local gut inflammation, which in turn could trigger inflammation in the brain. We are wrapping up a study investigating whether an altered, pro-inflammatory gut microbiome can emerge following a heart attack and heart failure. If so, it could indicate that gut inflammation in cardiovascular disease could be an important factor contributing to neuroinflammation.

We’re also working with Serge Luquet at the University in Paris, France, to evaluate how hypothalamic glial cells, particularly specialized glial cells called astrocytes, play a key role in the direct control of the body’s metabolism — and whether they could become a potential target for anti-obesity interventions.