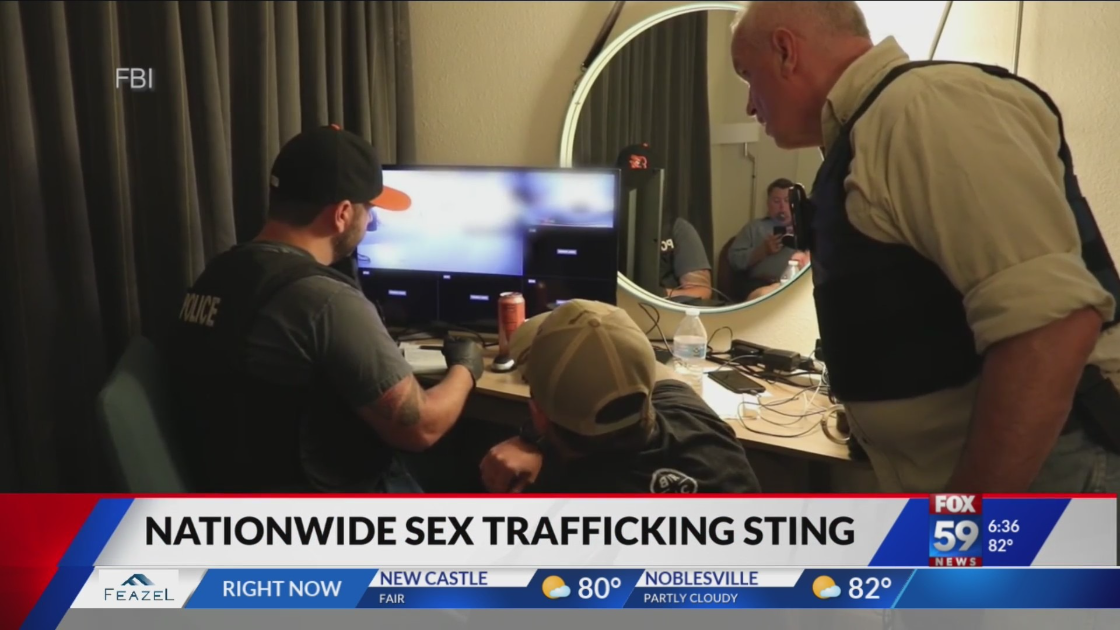 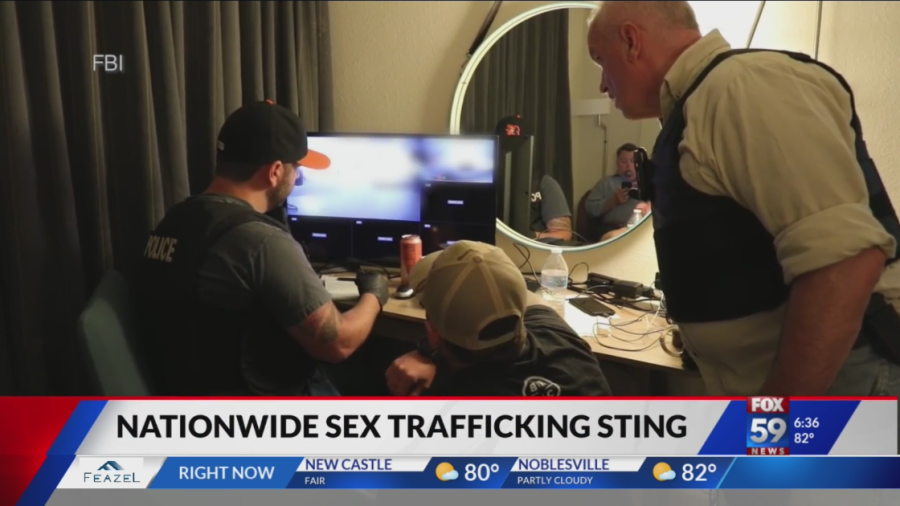 Note: The number for the National Human Trafficking Hotline is 1-888-373-7888 or you can text 233733. Additional resources are provided at the bottom of this article.

INDIANAPOLIS — Federal authorities partnered with state and local agencies on a national sex trafficking initiative dubbed “Operation Cross Country,” with operations across the country carried out over two weeks in August.

The operation, led by agents with the Federal Bureau of Investigation, took aim at identifying and finding victims of sex trafficking, and investigating and arresting individuals or criminal enterprises, involved in both child sex and human trafficking.

Through Operation Cross Country, the FBI said 84 minors that were being trafficked for sex or sexually exploited, were identified and located. There were also 37 children actively missing, who were also located, authorities said.

“Human trafficking is among the most heinous crimes the FBI encounters,” said FBI Director Christopher Wray.

FOX59 spoke with Doug Kouns, CEO of Veracity IIR, and retired FBI agent, who is familiar with these types of operations. He echoed the same message.

“This is such a heinous crime and if they can do this to other human beings, I certainly think they’re capable of committing violence,” said Kouns. “I have seen examples of where the traffickers have used violence to force their victims to work in the sex industry. I remember one specifically, the allegation was that the trafficker was using a power drill, threatening to drill into their bones.”

Agents with the Indianapolis Division of the FBI were part of this operation and confirmed that nine juveniles were found locally during efforts coordinated with other authorities and organizations. Three sex offenders were also identified and located locally.

“Unfortunately, such crimes—against both adults and children—are far more common than most people realize. As we did in this operation, the FBI and our partners will continue to find and arrest traffickers, identify and help victims, and raise awareness of the exploitation our most vulnerable populations,” Wray said.

Although authorities said the operation itself took eight hours, the planning behind it was extensive and included several meetings with participating agencies for purposes of intelligence gathering and deconfliction. It also included weekly coordination meetings with FBI Headquarters, which were held for approximately six weeks.

FBI Indianapolis said ‘countless hours’ were spent within each of the participating agencies to compile information for target packets. The operation was a joint effort between investigators, intelligence analysts, victim specialists, state agencies, prosecutors, non-government organizations, which all played an active role in planning and executing the operation.

“These kind of operations are very labor intensive. They take a long time to investigate. Often they start with just one simple allegation,” said Kouns.

He explained these cases may also start with something that comes to the attention of law enforcement and investigators realize it is part of a much bigger organization. For comparison, he said they may even look like a drug trafficking organization, with a hierarchy of roles.

During the efforts locally, FBI Indianapolis said seven of the nine juveniles found were in the Marion County area, one was located in the Terre Haute area, and another in Louisville, Kentucky. One of the minors is believed to be a victim of human trafficking, but further investigations and interviews will be conducted, a spokesperson for the FBI Indianapolis said.

Although the average age of children located during the nationwide efforts was 15.5 years old, with the youngest victim being 11, the FBI Indianapolis said the youngest victim they located through regional efforts, was 14 and the oldest of the underage victims was 17.

The FBI said this operation was a massive undertaking across the country, where FBI special agents, intelligence analysts, victim specialists and child adolescent and forensic interviewers worked alongside 200 state, local and federal partners, as well as the National Center for Missing and Exploited Children (NCMEC) to carry out 391 operations over a two-week period.

“The success of Operation Cross County reinforces what NCMEC sees every day. Children are being bought and sold for sex in communities across the country by traffickers, gangs and even family members,” said Michelle DeLaune, who serves as President and CEO of the National Center for Missing & Exploited Children.

Kouns said these operations are typically carried out in the fashion they are, during a short time frame.

“You do a coordinated takedown and that eliminates any kind of warning system, rather than if you just took down one piece of it at a time,” said Kouns. “If the rest of the organization gets alerted to it, it can dismantle and disappear, and whatever chance you might have had to find children being held in that lifestyle is gone forever.”

“Like a drug case you identify all the members of that organization and you try to take down as many as you can as close to the same time as you can, and eliminate that warning that others may have,” Kouns explained.

The FBI shared that the suspects identified in this operation will be subject to additional investigation, which could result in potential charges.

Resources for survivors of sex trafficking

Ascent 121, which provides trauma recovery services for teen survivors of sex trafficking, was also a part of the FBI Indianapolis-led efforts of Operation Cross Country.

Although the organization could not speak about the case, its staff said this one operation and the results of it speak to an enormous issue experienced nationwide every day.

“We know that the issue of trafficking is much larger than even we see, but serving 150 kids a year that do need these services, the problem is enormous,” said Danika Hoistion, Director of Development and Communications.

Their organization is one of the leading efforts for sexually exploited youth in the state, and they also work alongside local and state investigators in law enforcement and child services.

“These kids come from Indianapolis, but they also come from Carmel, they come from Fort Wayne; we really serve kids throughout the state and sex trafficking is everywhere in every city, every suburb, every town,” said Hoistion.

“We do see with the kids that we serve that their exploiters are most often people that they already know,” said Hoistion. She said, sometimes this may be an older boyfriend or person a minor is in a relationship with.

“We see that their exploiters are family members, so we do see that the traffickers are people that these kids know and trust because they’re being preyed upon,” said Hoistion. “A lot of times survivors or those that are experiencing trafficking, don’t realize that they are being trafficked.”

By definition, minors under the age of 18 engaging in commercial sex are considered to be victims of human trafficking, regardless of the use of force, fraud, or coercion. In 2019, data shared by the NCMEC showed that an estimated 1 in 6 endangered runaways reported to them were likely being trafficked for sex.

Hoistion said becoming educated on sex trafficking, including what it is and potential signs to recognize, is crucial.

In addition to survivor services, Ascent 121 also offers community-based and residential programs and resources, awareness presentations, including training and consulting for agencies interested in increasing their capacity to serve survivors and strengthen programming, and more.

The organization recognizes that leaving these situations is difficult and while many people may be unsure whether they’re in an exploitive relationship, they said there are free, safe, and confidential resources available to help, including Ascent 121.

Note: The hotline numbers provide 24-hour support and assistance, but anyone in immediate trouble should always call 911, advocates say.