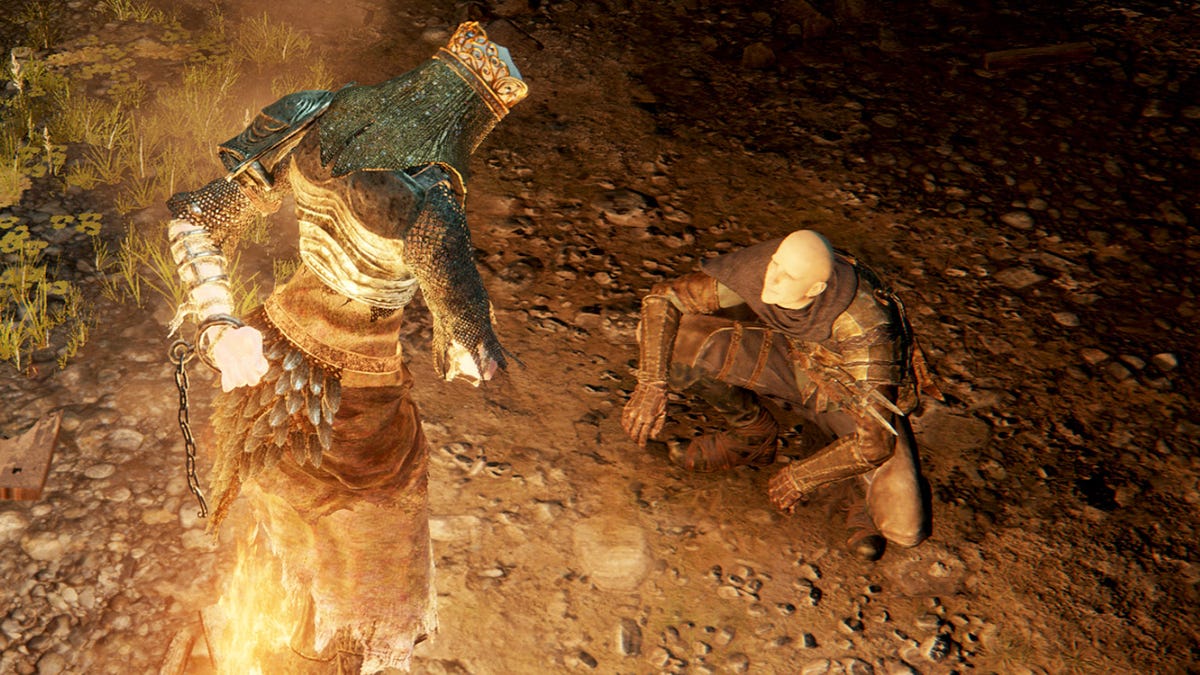 While trying out today’s bug fixes and balance adjustments, be sure to head back to the Limgrave cavern where you likely first encountered Patches. If you already progressed far enough into his quest before the patch, his little grotto in Murkwater Cave should be closed off by the game’s boss-teasing golden fog.

Opening the arena’s conspicuously placed chest will prompt Patches to ambush you again, but this time around, he quickly recognizes you and surrenders to avoid another ass-beating. Once he’s pacified, he teaches you how to squat low to the ground and, after you sit at a checkpoint, reopens his shop.

Patches’ storyline previously ended at the Shaded Castle, a swampy, poison-drenched fortress situated between Mt. Gelmir and Altus Plateau. It seemed pretty final, too: The dude gave you one last quest item and appeared to succumb to his mysterious injuries. I guess the dimension-hopping jerk still had some fight left in him after all.

Despite his constant treachery, the Souls community can’t help but love everything about Patches. The news that his unique pose was added to Elden Ring with today’s patch was met with overwhelming positivity from fans, many of whom liken the gesture to a real-world posture known colloquially as the “Slav squat.”

“Finally, I can leave ‘Time for dung’ messages with an appropriate emote,” wrote one Reddit user, a Tarnished after my own heart.

Just like his enduring legacy as FromSoftware’s pseudo-mascot, it appears Elden Ring players will be stuck with Patches for the foreseeable future. Pay him a visit and see what he has to offer.

Stranger Things 4: all the questions part 2 should answer