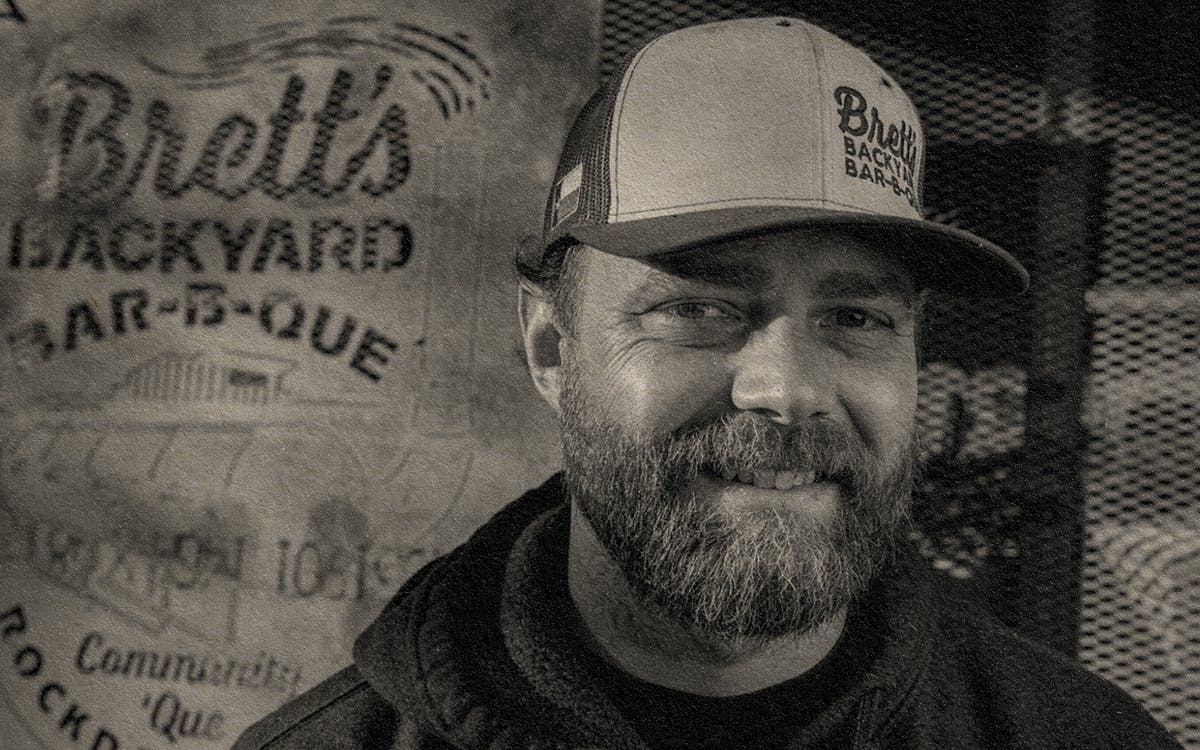 This article is part of a series that spotlights Texas pitmasters in their own words, available exclusively to TM BBQ Club members.

Brett Boren may seem like an easygoing guy, but don’t let his nonchalant demeanor fool you. After learning what worked through barbecue competitions, Brett set out to create a barbecue joint centered around his Rockdale community. He’s achieved a lot—including landing a spot on Texas Monthly‘s 2021 Top 50 list—since he opened Brett’s Backyard Bar-B-Que in 2018, but he’s showing no signs of slowing down. He may even be the next mayor of Rockdale.

Tell us about the first person who taught you about barbecue.

I moved overseas from Texas with my mother as a young kid, so I didn’t have a traditional upbringing around barbecue. When I moved back to Texas in the eighth grade, I loved barbecue. Back then, in the Round Rock area, there wasn’t much to chose from, nor was barbecue a big thing that everyone talked about. Seeing my mother grilling steaks and my father making burgers was really it. After high school, friends would have gatherings and someone would usually be smoking a brisket or ribs. That was when I realized this whole barbecue thing was much bigger than I’d thought.

Do you remember a backyard, a barbecue joint, or an experience that ignited your barbecue obsession?

For me, it was a barbecue competition. I loved to play sports, and I was always very competitive. But once I was introduced to competition barbecue, I was immediately hooked. That was the moment that lit the fire for me.

What message are you trying to share with your customers through your food?

Everyone has their own style and technique. Don’t try to cook to someone else’s style—create your own. The masses, in my opinion, like something a little different. My style is hot and fast, sweet ribs with a kiss of heat. That’s what I did in competition, and that’s the way I taught myself.

I’m a nut about barbecue. Over the years, I’ve taught myself so many things about cooking. I’m more interested in the science behind the cook nowadays—like radiant heat versus convection heat. But for me, it’s the fire. The fire is what makes the cook—that goes for direct or indirect.

When was the last time you ate someone else’s barbecue?

I don’t get away much nowadays, but whenever I get the chance I’ll pop into a friend’s spot. The last time I got to sit down and eat was probably at LeRoy and Lewis. Evan [LeRoy] is open on Wednesdays and he’s easy to get to when I’m doing a Sam’s run. But that’s why I love barbecue festivals. It’s an opportunity to eat friends’ food and catch up with everyone.

Whole hog! I love whole hog. It’s very different than the style we’re accustomed to here in Central Texas. And there’s so many different ways to do it.

What’s the best beverage to wash down barbecue?

Definitely a nice, cold draft beer if they have it on tap. If not, I’ll settle for a canned craft beer. I like to try to pair the beer with the food I’m eating.

My tool of choice is my smoker. I currently have three Moberg Smokers, and they’re all different. I’m a firm believer that you’re only as good as the tools in your tool belt!

What recommendations do you have for someone new to Texas ’cue?

Don’t watch YouTube! Jokes aside, the best way to learn and become a better cook is to cook more. When you change something, change only one thing at a time. Take tons of notes. Also, what is the weather like? Humidity? Is it windy? What direction is the wind coming from? These are all things that affect a cook.

Want to connect with some of your favorite Texas pitmasters, like Brett? Join our members-only TM BBQ Club Facebook group.