Neither Here, Nor There – The Texas Observer 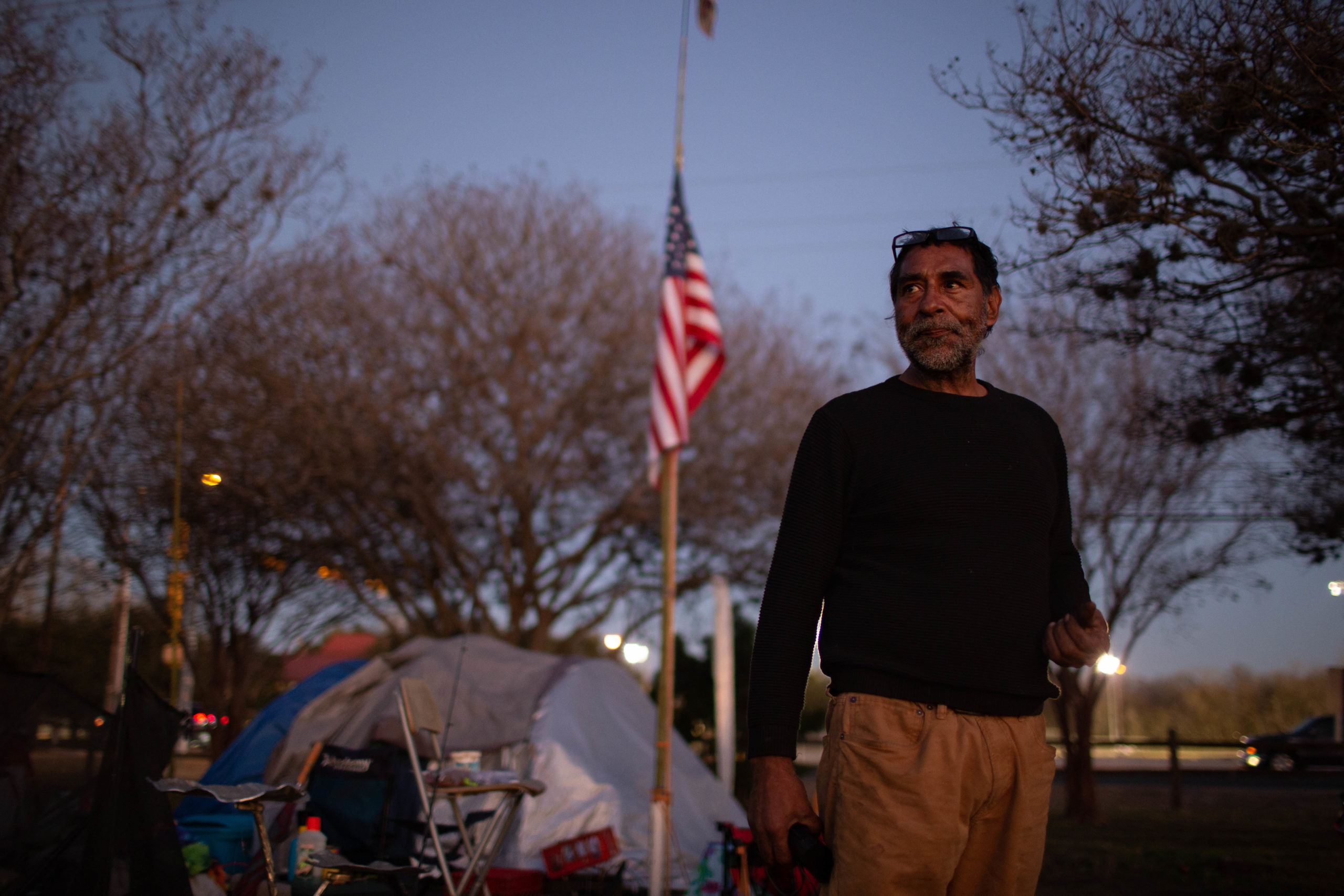 On a concrete pillar beneath an overpass in a gentrifying part of East Austin, someone has written in bright-orange spray paint: “Bad place to camp or do drugs—Leave.” It’s one of few reminders, aside from some orange syringe caps, that a community of the unhoused lived here for much of last year. In late August, under threat of citation or arrest, the destitute campers were flushed out by police and city contractors.

Many gathered what they could and simply shuffled to a park across the street. They pitched their tents—a shred of privacy and shelter from the elements—and resumed surviving. Three months later, the cops and cleaning crews arrived again; the unhoused dutifully dispersed, some to a nearby strip of land between a railroad track and a poultry company, where they remained as of early March. Others fled to the shore of Lady Bird Lake, where they were cleared out in February.

This is daily life for more than 2,000 unsheltered individuals in Austin, a fast-growing tech hub where housing costs are suffocating the working class. A similar dynamic prevails in other major cities, but, for a time, things were different in Texas’ capital.

In mid-2019, Austin City Council rolled back its ordinances criminalizing camping, begging, and sitting or napping downtown—a rare move in a country that’s increasingly made homelessness illicit for 30 years. In response, unhoused Austinites emerged from hidden crannies of the city and pitched tents, largely in highway underpasses. Tickets, warrants, and arrests evaporated. But less than two years later, after a relentless campaign by the police union, local TV media, and right-wing politicos, Austin voters approved a ballot measure to restore the old anti-homeless policies.

Since last summer, the city’s cleared underpasses and road medians all over town. In response, campers have moved to parks, creek beds, and wooded areas—where the displacement now repeats. Criminal citations are increasing again, with more issued in the final three months of last year than all of 2020. Without adequate affordable housing or shelter space, Austin’s poorest scramble from area to area, searching out a place where they’re allowed to survive.

Machete, his street name, stays warm by a campfire during an early February freeze. His moniker suits him: Upon arriving at this site, along with others just displaced from a park, he wielded his namesake to clear the tall grass and weeds. He grew up in San Antonio public housing and is an Army vet, he says, and he’s spent a good chunk of his life in prison. The cold—temperatures hit the low 20s that night— doesn’t bother him much. If he needs to warm up, he says, he can always go chop some more wood. And not with an axe.

Benny Luna, 56, packs up his belongings and leaves his campsite in late February under threat of citation and arrest. He says he’ll go back to another park he has stayed at before. An officer tells him they’ll be clearing that area soon, too, but Luna doesn’t have any other ideas.

Dueling graffiti remains six months after a homeless camp was cleared at this site. On one pillar is a message demeaning the campers; on the other, a retort: “Not homeless, I have an old school mobile home.” Many of the campers displaced have since been displaced multiple more times. Nestled in a dead-end corner of a Latino residential neighborhood, this area is gentrifying. A stone’s throw away, businesses are cropping up, including a “boutique event design and planning company.”

Debbie, 51, washes dishes in January at her encampment beside the railroad tracks in East Austin. It’s her fourth camping location in recent months. Originally from San Antonio, she hopes to get housing through Mobile Loaves and Fishes, a local nonprofit. She works sometimes helping clean up city properties. Police have come to the camp several times, warning her and her fellow campers that they will have to leave—but as of early March they were still there. She hopes she’ll be allowed to stay until she gets into permanent housing.

Luna, two weeks before getting kicked out, stands outside of his tent beside the running trails that hug Lady Bird Lake. He’s lived in Austin since he was 3. Luna says that fear of having his campsite cleared makes it harder for him to go out and find construction work. He complains, as well, about the city’s many newcomers driving up the rents. “A lot of people are coming, and they’re willing to pay whatever is asked of them,” he says.

Michael Rheams, a 49-year-old originally from Louisiana, picks through a few remaining odds and ends on the grassless patch where, until minutes before, his tent had stood. “I was loving living by the lake and everything, getting to see these deer, people passing by jogging and all that,” he says. Behind him, police tape surrounds a tent where an unhoused woman, Rosemary Renteria, was found dead that morning, February 22. The cops and cleaning crews proceeded to clear the camp regardless. The Austin Police Department says officers determined the death was “not suspicious.”

Photos and text by Gus Bova