At a Right-wing Comedy Night, the Hosts Are Laughing All the Way to the Bank – Texas Monthly 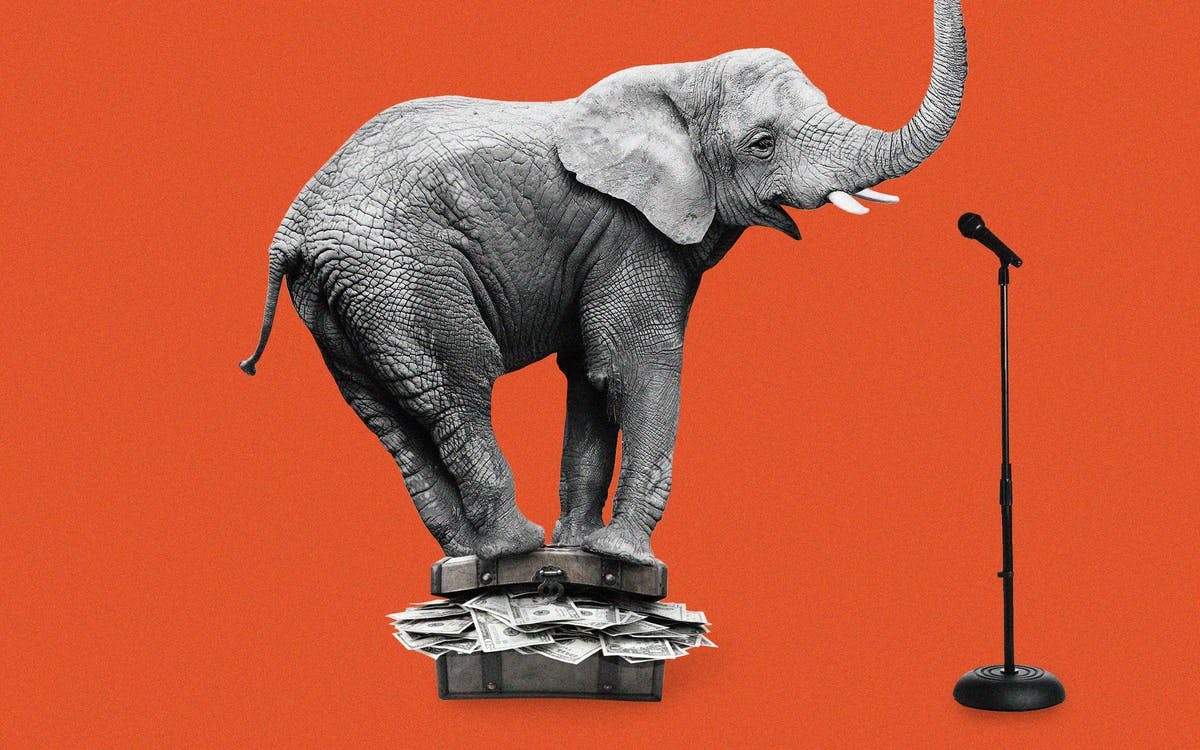 The anchor tenant of the Tejas Center, a strip mall in Bryan near the border with College Station, is an H-E-B, of course. Walk north past the Dollar Tree, and the Boot Barn, and a sickly-looking, shuttered Bealls, and east along a drainage ditch, and back by a set of loading docks, and you’ll find the LifeChurch. The place of worship is so perfectly unadorned it could have made John Calvin want to cheer it up with a poster or two.

Tonight, an audience of 150 or so packs the church for an evening of learning and entertainment. Former state representative and political-messaging entrepreneur Rick Green, along with Christian comedian Brad Stine, are hosting the second of sixteen “Comedy and the Constitution” events scheduled across Texas in April. (Starting in the Cowboy Church of Erath County in Stephenville, southwest of Fort Worth, the tour ended at an upscale event center in New Braunfels.) In Bryan, the True Texas Project, a right-wing group that grew out of a tea party organization in Fort Worth’s Tarrant County, is helping put on the comedy night. Events such as this are part of the architecture, invisible to most, that keeps the movement going.

The humor comes from Stine, who is described in the night’s program as having a “style of intelligent and relatable comedy observations” that has made him “for over 20 years, by far the most unique Christian comic in the country.” He kills. “I think I found the biggest waste of taxpayer money,” he tells the audience. “Speed limit signs! They ain’t working!” Laughter fills the room. He then tells a story about being in a northern state and seeing ice-fishing tents. “They were fishing on a frozen lake,” he shouts into the mic. “How addicted to fishing do you have to be?” Riotous laughter again. This may not be your speed, but you try Christian comedy. It’s probably harder than it looks.

Then, he switches from observational comedy to dark premonitions about the direction of the country. “Our universities are completely corrupted with the cancer of Marxism,” he says. The ideology of the left “is Marxist and it will kill us!” He asks the audience members what causes they’ll fight for: “What are you willing to die for? Anything? Cause if you got nothing worth dying for you got nothing worth living for.”

When it’s time to conclude, he acknowledges that comedy isn’t the only medicine necessary to defeat the evils of liberalism. “I’m glad you had some laughs,” he concludes, “but in the end what you need is marching orders.” He hands the mic off to Green, who’s ready to deliver those orders. It’s an old formula: Make them laugh, leave them thinking.

Green directs the audience to look at the dais at the front of the church. There’s a brick on the dais, with which Green will begin to build his own place of worship. It is set to be the first bit of masonry laid in a project Green is now fund-raising for: a $60 million, five-hundred-acre compound he called the “Patriot Academy Campus,” which will host and tie together the various projects Green has fostered as a movement entrepreneur.

Eventually, a section of the campus will be reserved for young liberty lovers in the Patriot Academy, which has trained teenagers in the basics of politicking for the right since Green founded it in 2003. Other facilities will train older folks to become “constitution coaches” and evangelizers for the originalist interpretation of that document favored by many right-wing judges. A gun range will train citizens to exercise their Second Amendment rights.

Legal minds at the Center for Constitutional Defense, Green explains in a video shown to the crowd, will be housed on-site in a scale replica of Thomas Jefferson’s Monticello home. Across from it, separated by a model of Lexington Green, where the first shots were fired in America’s war for independence from Britain, there’ll be a replica of Philadelphia’s Independence Hall. That replica, he says, will allow right-thinking Texans to see the building without going to the real city and “get[ting] shot.”

“Have you noticed how many freedom loving, hard-working Americans believe that America’s best days are behind us?” Green asks. “We’ve allowed our schoolchildren to be taught to hate this nation.” But from the rubble, the nation will be rebuilt, starting at Green’s campus. For just $2,400, your family could have its own inscribed brick laid on the grounds. Deep-pocketed donors, Green told the crowd, could assist in the project’s realization with the gift of five hundred acres of land. “We’re trying to decide where the campus is going to be,” he said, suggesting that any patriotic ranchers in the crowd could secure it as an asset for their community. Short of that, he asked attendees to chip in—perhaps in the form of a donation of $17.76—to help keep the fund-raising tour going.

Ask a liberal who Green is, and what this is all about, and the answer is likely to be that he is a “grifter.” That word is used a lot these days, especially in relationship to those on the right, but rather than referring to outright frauds like grifters of old, it now is used for a wide variety of entrepreneurs who make bank while engaging in advocacy for the cause.

Green served as a state representative from Dripping Springs, 23 miles southwest of downtown Austin, from 1999 to 2003, and played a starring role in the excellent documentary Last Man Standing: Politics Texas Style, which chronicled his losing 2002 campaign against a Democratic challenger. “Vote Green, like money!” he called out to voters on the trail. Even then, he was slick and fast-talking, with a perpetual grin on his face.

In his final term, Green was involved in an eyebrow-raising series of minor scandals. First, the Austin American-Statesman revealed that as a lawyer in private practice, Green had successfully won parole for a convicted Ponzi schemer named Melvin Cox who had stolen tens of millions of dollars from investors. Cox had used some of that money to lend $400,000 to a business owned by Green’s family called Krestmont International, which among other things sold diet supplements. Krestmont eventually paid $12,000 to Cox’s victims. Green told the Austin American-Statesman that he helped Cox because he was a family friend. Investigations into Cox’s scheme did not implicate Green, and the Legislature did not pursue an ethics inquiry.

Then, during the legislative session, Green invited lobbyists and others to purchase tickets at a fundraiser in support of a foundation he started. The Texas Election Code bars officeholders from accepting contributions from anyone during the legislative session. Green’s invitation to lobbyists for a “charity” event was technically legal, but it raised eyebrows: it amounted to a “shakedown,” the Texas chapter of the watchdog group Common Cause told the Dallas Morning News. (Green told the paper that he wasn’t using campaign funds or state equipment, and in a later defamation lawsuit, he indicated that he had invited others to the event, not just lobbyists.)

The most bizarre episode, though, arose when he appeared in an infomercial for a Maine-based company offering a diet supplement called Focus Factor that was partly shot in his office in the Texas Capitol. That may have conflicted with Texas ethics guidelines prohibiting the “misuse of government property” for “personal or private purposes,” noted the Dallas Morning News. “If you’re a professional that deals with multiple tasks like I do as a state legislator, you need the mental clarity, you need the concentration, to be able to separate those tasks,” Green offered from within his taxpayer-provided office. “Focus Factor’s done that for me.” Focus Factor’s infomercial offered viewers a “supercharged brain,” leading Texas Monthly to ask, in its 2001 Best and Worst Legislators list, “Who decided that Rick Green was the exemplar of a supercharged brain?” (In the defamation lawsuit, Green said he had no ownership interest in the company and wasn’t paid to appear in the ad—and perhaps was sought out because he had “significant experience in the area of nutritional supplements.”)

But to dismiss Green as a modern-day political grifter is to miss an important truth. Yes, if your church wishes to book the “Comedy and the Constitution” tour, you’ll have to provide him and Stine each a $3,000 honorarium, along with volunteers to help sell their merch and educational materials. According to the Patriot Academy website, you’ll have to pay for the pair’s travel costs and promote the event during your Sunday service and on local Christian radio stations. And yes, the pitch for Green’s compound seems a bit farcical. But that a man such as Green can earn a living touring the country, rallying the troops, and urging them to stay committed to the fight makes the right-wing movement stronger. The left may occasionally rouse itself to protest again one perceived outrage or another, but the right has built something more enduring: a robust marketplace.

Democrats and liberals saw their own profit-seekers rise during the Trump years, including some of those behind the endless podcasts and books about the Mueller investigation, shady firms fund-raising off voters’ fears, and no-chance candidates running in deep-red states. But the party’s marketplace is far weaker. An apologist for liberal values touring the country, gathering a crowd of hundreds, kids in tow, at an event space on a Tuesday night to listen to buck-up speeches about the need to defend liberal values and run for school boards? It’s difficult to imagine.

One reason for that might be that many broad liberal values—diversity, egalitarianism, and the idea of history as a progression from worse to better—are offered through educational institutions, the media, and popular culture. You may not feel the need to hear a stand-up comic recite your beliefs back to you on a school night if you’re getting it in spades from prime-time TV. And you probably don’t feel the need to build a compound on someone else’s ranch.

The Democrats are missing out on that, though. The motivation to organize and the sense of attachment offered by conservative entrepreneurs such as Green is strong. Among the services offered by his organization is that course we mentioned earlier, which trains right-wing activists to become constitution coaches. It received a rave review in the program’s brochure from Larry and Janet LeBlanc of Surprise, Arizona. “Thanks to Patriot Academy, this Grandma and Grandpa coach team are so awake that we are excited to defend against any communistic behavior,” Larry wrote. The two had become active in monitoring their local school district in the Phoenix suburbs. “I no longer am concerned about being politically correct. Our boots of peace are moving towards the enemy and we are certain God has our back.” He wasn’t joking.