Border Patrol Agents Killed the Uvalde Shooter, But Why Were They There? 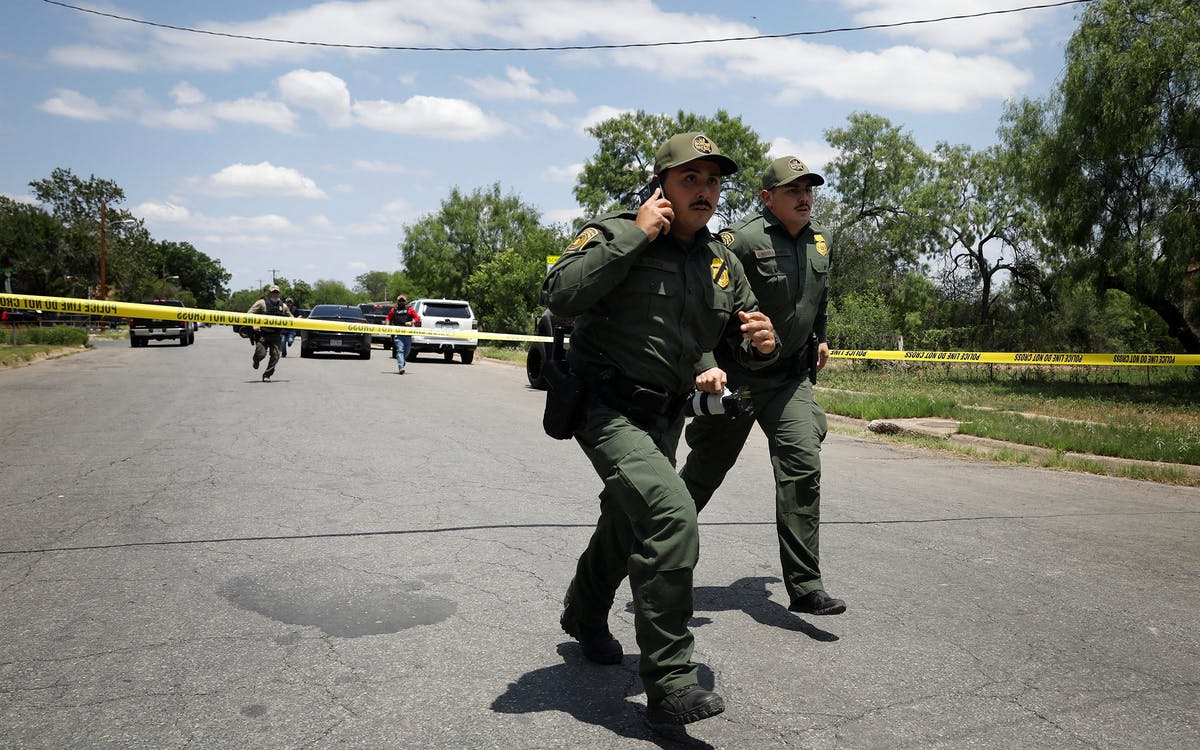 When Border Patrol radios crackled with a request for aid from local Uvalde police on Tuesday, it was nothing out of the ordinary. Agents often act as first responders to emergencies in their communities. The alert on Tuesday, however, was horrific: a gunman had entered Robb Elementary School.

Customs and Border Protection agents were among the first to respond to the mass shooting, in which at least nineteen children and two teachers were killed. That response speaks to the outsized role CBP has in small towns near the border, like Uvalde.

A CBP official told Texas Monthly that as emergency calls first came in, four agents with CBP’s Bortac SWAT team were investigating stash houses on the border to the west of Uvalde. The agents immediately responded, arriving at the school just before noon. Bortac (Border Patrol Tactical Unit) is CBP’s’s paramilitary force, an elite group of agents trained to exchange gunfire with cartels. Border Patrol agents not in the SWAT unit also rushed to the school, for more personal reasons: their own children were in the building.

But as the news came in, the heavy presence of CPB agents led some on social media to loudly question why immigration officers were so prominent on the scene. (Some of the posts conflated CBP with Immigration and Customs Enforcement, which did not respond to the shooting.)

The agents’ presence at the school was easily explicable: they are everywhere in Uvalde. CBP’s white and green SUVs are familiar sights around the town, which is fewer than eighty miles from northern Mexico, and thus well within the hundred-mile “border zone” where CBP operates. Like many Texas towns in this zone, Uvalde hosts a permanent CBP checkpoint, where agents stop and inspect vehicles going north along the highway. In a town of about 15,000, CBP is a major employer, offering about 150 unionized jobs with solid salaries and government benefits. Many residents have at least one family member or friend who works for the agency.

In all, as many as eighty CBP agents, including some who were off duty, rushed to the school during and after the shooting. According to the CBP official, three Bortac agents engaged the shooter in gunfire — with one holding a shield — after entering Robb Elementary along with local and state law-enforcement officers. One Bortac agent was wounded, but not critically. The CBP official told Texas Monthly that it’s “unclear which bullet from which gun” struck the shooter and killed him.

In the wake of the shooting, CBP agents provided medical assistance and helped with the effort to reunite children with their families. But the presence of the agents at the school, in a town with some undocumented residents, gave some observers pause. William Lopez, an assistant professor at the University of Michigan who studies fear in immigrant communities, immediately worried about the anxieties undocumented parents might experience. “Border Patrol also on the scene,” he wrote in a widely shared tweet on Tuesday afternoon. “I pray for those parents fearing that their kids are dead and debating whether or not they’ll be arrested if they go to find out.”

There are no reliable figures on what percentage of Uvalde residents are undocumented; most assumptions that the town has a large undocumented population seemed to stem from the fact that it is 72.7 percent Hispanic. According to 2020 estimates from the Census Bureau, 10.4 percent of Uvalde residents were foreign-born; of that population, 69 percent were not naturalized U.S. citizens. Whatever the real numbers, it’s true that on any given day, immigration enforcement is visible around town. At Uvalde’s CBP checkpoint, undocumented drivers and passengers headed north are frequently arrested and eventually transferred to ICE custody and subject to deportation proceedings.

When responding to public emergencies, however, CBP has a policy of not engaging in immigration enforcement, and schools at all times are considered “protected zones” where agents typically refrain from arrests. On Wednesday, the Department of Homeland Security (home to CBP and ICE) published a statement intended to clarify agents’ role during the ongoing response to the shooting: “The site of the tragedy in Uvalde, Texas is a protected area. To the fullest extent possible, ICE and CBP will not conduct immigration enforcement activities there so that individuals, regardless of immigration status, can seek assistance, reunify with family and loved ones, and otherwise address the tragedy that occurred.” In addition, the statement read, “ICE and CBP provide emergency assistance to individuals regardless of their immigration status.”

Considering that this message was published the day after parents had rushed to the reunification center, it’s unclear whether it assuaged any potential fears. The language of “to the fullest extent possible” also left the policy somewhat ambiguous.

Customs and Border Protection has drawn criticism in the past for its role in non-immigration-related activities. In 2020, Bortac was mobilized during protests in Portland, Oregon, in reaction to the murder of George Floyd. Agents dressed in black “disappeared” protesters into vans without identifying themselves as police, and dispensed tear gas and projectiles that may have injured at least one person. The incident brought new scrutiny to Bortac’s origins as a riot-control force in immigrant detention centers—and to its transformation into a full-fledged paramilitary organization that had been mobilized in Iraq and Afghanistan.

Those who saw Border Patrol agents at Robb Elementary School had reasons to be skeptical. But the reality is that across the Texas border region, Customs and Border Protection is a fact of life. In small towns, when someone calls 911 to report a medical emergency or an active crime, Border Patrol agents often arrive sooner than overwhelmed local first responders. (The agency is one of the largest federal law enforcement agencies in the world; it employs almost twice as many people as the FBI.) Because CPB draws employees from local populations along the border, the agents are also more than 50 percent Hispanic. It’s hard to overstate the ubiquity of the agents in southern Texas. In a place like Uvalde, they’re not just in town; in some respects, they are the town.