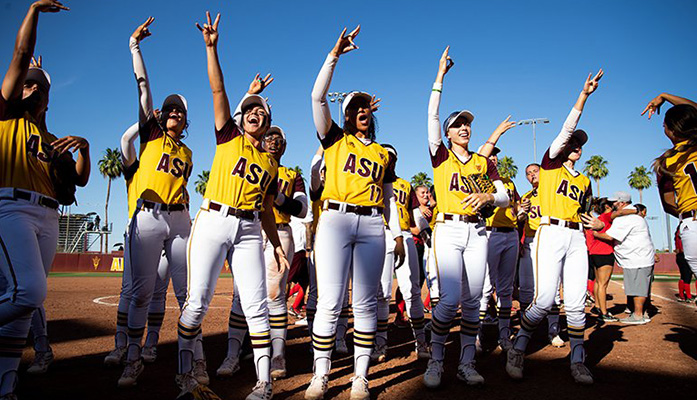 TEMPE – The Arizona State softball program took its first step toward reaching the Women’s College World Series after going undefeated in regional play this past weekend. It will be the first time since 2018 that the Sun Devils will advance and host the Super Regional round.

ASU is having a historic season on many fronts and finds itself under a national spotlight.

“It’s gratifying to be on this kind of stage and show everybody what we’ve been doing all year long,” coach Trisha Ford said. “Welcome to the party, I guess is what I would say.”

Coining it as a “party” may have been an understatement from the Pac-12 Coach of the Year. An average attendance of 1,800 fans showed up to support the Sun Devils across their three games, despite the capacity of Farrington Stadium listed at 1,500.

“(Hearing the fans) is pretty uplifting,” freshman first baseman Cydney Sanders said. “Whenever I hit a home run, it’s super exciting. You hear the roar of the crowd and your ears are ringing. I love it.”

Sanders, the 2022 Pac-12 Freshman of the Year, went relatively quiet in the first two games of the weekend, drawing a few walks and getting on base. In Sunday’s regional championship, she hammered her 21st homer of the season, breaking ASU’s single-season record.

As a true freshman from San Marcos, California, Sanders started in all 52 games this season, while also leading Arizona State in nearly every offensive category. She is batting .424 with a team-leading 63 RBIs and a .555 on-base percentage.

In the day and age of the one-time transfer rule, many coaches are preferring to add veteran talent over high school recruits. The ASU softball team has its fair share of transfers (five), but it was a pair of first year players, along with Sanders, that played major roles over the weekend.

Mac Morgan was trusted with the starting duties in the circle for Arizona State Friday and Sunday. The ace of the staff went the distance in both outings, while throwing a career-high nine strikeouts in her first postseason start.

“Think about everything that (Morgan) learned,” coach Trisha Ford said following game one. “A freshman coming in and starting regional, having a tight game like this, imagine what that’s going to do to her resume and kind of her toolbox as we move forward.”

Kristiana Watson entered the regional opener as a pinch hitter with her team down 2-1 and five outs away from a loss to Cal State Fullerton. With the bases loaded, Watson battled in a nine pitch at-bat that resulted in a go-ahead grand slam.

“In that situation, I was just doing my best to keep it simple and hit something hard to produce for my team,” Watson said of her approach.

Watson, a Tucson native, spent most of the season coming off the bench, but was always ready for opportunities. In 50 plate appearances this season, she drove in 17 RBIs, which is the eighth-highest on the team despite having the fifth-lowest amount of opportunities.

“I feel like we can develop players here and I think we’ve proven that over the years,” Ford said about bringing in freshmen. “But I can’t develop or teach somebody to compete and love the grind. I think that’s what we have: a team of players that really grind.”

This has been the team fans have come to love. A team that during the regular season, was top five in the nation in batting average, home runs, on base percentage, slugging percentage and runs scored. The Sun Devils led the conference in all those categories as well.

They were clearly battle-tested during Pac-12 play as five teams from the Conference of Champions (ASU, Arizona, Oregon State, Stanford and UCLA) advanced to super regionals.

“We have just a different chemistry this year and just playing behind each other,” said outfielder Jazmine Hill, who had seven RBIs over the weekend. “It’s bringing us to where we are now, giving us those successful moments. So I’m super excited. I’m proud of this team.”

Now Arizona State will look forward to a best-of-three series with the No. 9 ranked Northwestern Wildcats this weekend, with the “party” returning to Farrington Stadium.