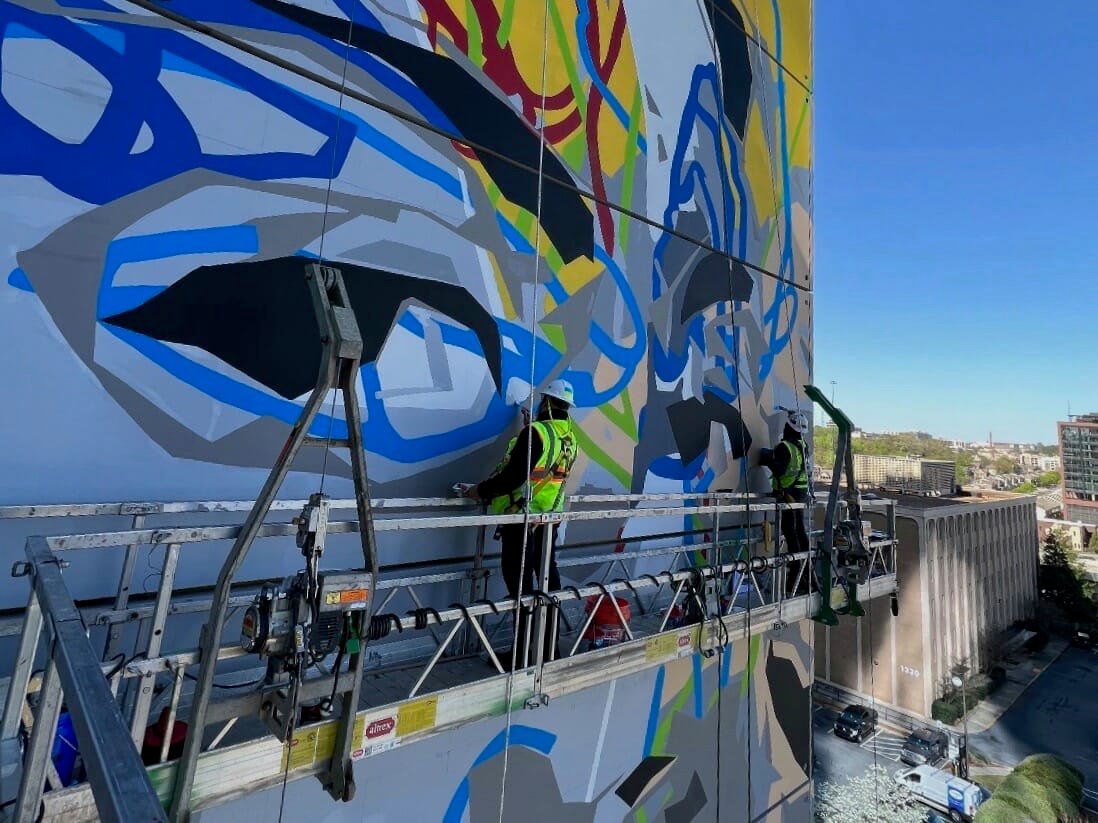 When Atlanta muralist Joe Dreher was growing up in New Jersey, his dad would often take him on weekend drives to Philadelphia, New York or Washington D.C. where young Joe would marvel at the tall buildings that stretched impossibly up into the heavens. Dreher remembers craning his neck to gaze at the Empire State Building and asking how an edifice so majestic could come into existence. “How does something like that get built?” His dad’s reply: “Brick by brick.”

Now, as people gaze into Midtown Atlanta’s skyline, they can marvel at Dreher’s work, assembled not brick by brick but layer by layer on two gigantic murals going up as part of the major Midtown Union construction project. Working off the building’s name of “union,” the murals showcase Dreher’s most personal work to date.

The first, situated 120 feet off the ground on Spring Street between 16th and 17th, depicts Dreher and his wife, Treasure, in the 1980s, shortly before they got married. Extending majestically across 4,750 square feet of industrial canvas, its Mobius strip pattern shows Joe’s and Treasure’s faces intermingled, drawn from black-and-white photographs of their younger selves.

The second mural features Dreher’s whole family, including their two sons Alexander (Alex) and Maximillian, and stretches across 2,750 square feet on the building’s West Peachtree side.

Dreher moved to Georgia in 1988 to attend Savannah College of Art and Design, where he earned a degree in design and architecture. From there, he embarked upon a decades-long career as an architect. When he talks about painting, you can tell he has the spatial awareness of someone who has designed buildings from the inside out.

Muralists deal with many of the same components as architects — proportion, scale, composition. So, even though Dreher didn’t have experience painting murals, he knew how to map out a project.

But for projects like the Midtown Union building, where he has to work day in and day out atop narrow scaffolding with only harnesses standing between security and potential disaster, it’s also crucial to gather a team you trust. For this project, Dreher has assembled fellow artists Muhammad Suber and Krista M. Jones.

In March, the trio kicked off their meticulous work on the murals, wearing coats and gloves as they shivered in the late-stage winter. Given that it’s an active construction site, they also had to undergo safety training. Now in May, clad in T-shirts, hard hats and goggles, they’re working ahead of schedule to wrap up the second mural by early June.

Having started relatively late in life (in his 40s), Dreher may never have started doing murals if it weren’t for the economic recession of 2007, when he was forced to close his architecture and design practice and then spiraled into a deep depression. “I didn’t understand what it was. I just knew I didn’t want to go out of the house, I didn’t want to get off the bed, I had no energy to do anything,” Dreher said.

Things finally began to turn around in 2013 when Dreher and his then-teenage son Alex volunteered with the public art nonprofit Living Walls at the suggestion of Alex’s teacher.

“I stepped back as dad and let these artists from all over the world take (Alex) under their wing,” he said. When his son announced one day that he’d found “his people” among Atlanta’s artists, Dreher said he and Treasure got goosebumps.

But Alex wasn’t the only one with a renewed sense of purpose. Dreher also began to see a new professional path emerging. And so, as a family, they dove into Atlanta’s arts scene. Even though they were “pretty close to flat broke” at the time, Dreher said he and his son began to participate in art shows around the country, including Art Basel in Miami.

The recession was like a primer coat for the last two years of the pandemic. Dreher said it strengthened him and his family and gave them direction and a sense of closeness, which has held up even during the challenges of the last two years.

“You had to focus on the things that were important in life. You had to get rid of all the things that weren’t essential. It made me realize that I wanted to spend more time with my kids and my wife, and have a flexible schedule,” he said. Alex, now 24, still paints a lot, too – and “sells way more paintings than I do,” Dreher said proudly.

Dreher’s dream is to someday set out with the whole family, traveling from place to place and creating artwork. But, whatever comes next, as these mural-adorned skyscrapers can attest, the sky is the (literal) limit. “I’ve started this game late, and I’m going to go as long as my body will hold up,” he said, laughing.

Alexis Hauk has written and edited for numerous newspapers, alt-weeklies, trade publications and national magazines including Time, the Atlantic, Mental Floss, Uproxx and Washingtonian magazine. A Decatur native, Alexis returned to Atlanta in 2018 after a decade living in Boston, Washington, D.C., New York City and Los Angeles. By day, she works in health communications. By night, she enjoys covering the arts and being Batman.