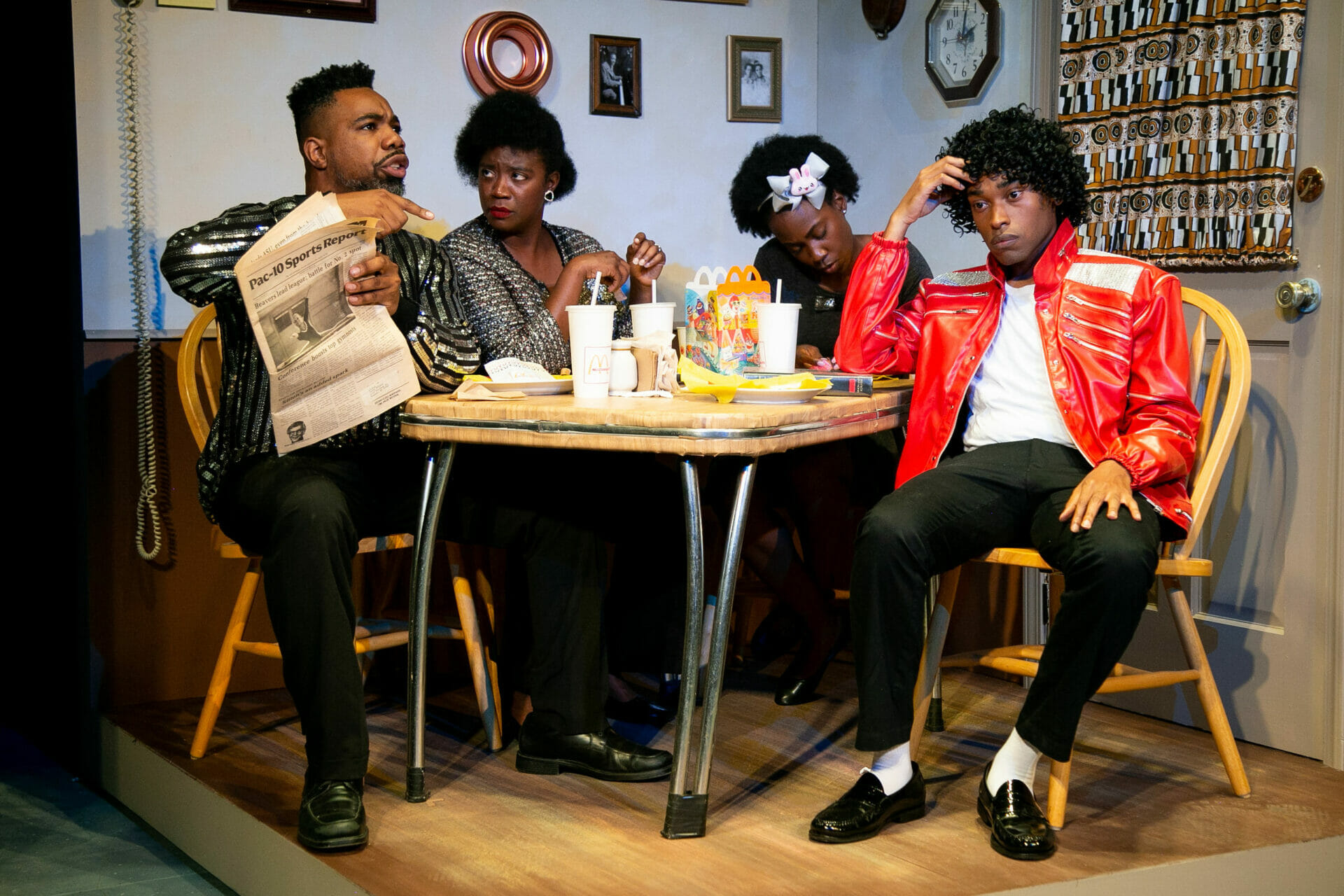 Laughter is the best medicine, but some things just aren’t funny. However, playwright Robert O’Hara certainly tries to take the most heartbreaking parts of the Black gay male experience and infuse then with humor in his wildly absurd play Bootycandy.

Onstage at Actor’s Express through June 12, Bootycandy is a series of vignettes that offer a peek into the lives of Black gay men. From trolling at a club to being followed home by a predator, O’Hara blends the absurdism of Luigi Pirandello’s Six Characters in Search of an Author and the farce of George C. Wolfe’s The Colored Museum, and makes something completely original and unusual.

Martin Damien Wilkins, who directed Father Comes Home from the Wars Parts 1, 2 & 3 and co-directed Angels in America at Actor’s Express, helms this production. Wilkins does a nice job of keeping his cards close to his chest before the big reveal at the end of the first act. Hint: This play is not what it seems.

However, the scenes seem so disjointed at the beginning that it’s hard to follow. The first scene focuses on a young boy who’s first learning about his “bootycandy,” which is what his mother calls his penis. Damian Lockhart plays the protagonist, Actor Two/Sutter. As Sutter, Lockhart portrays a Black boy growing up in the 1970s, realizing he’s gay and then searching for affirmation in unsafe ways as a young man in the early 1990s. His performance is effective, but difficult to watch because the audience knows that the boy’s innocence will be so short-lived.

The next scene features a preacher (Charlie Thomas as Actor Four) addressing his congregation about rumors that choir members are gay. Then, there’s a messy scene where a man, also played by Lockhart, and his brother-in-law (Caleb Clark as Actor Five) are having an affair. The issue with this production is that these scenes don’t seem to relate to each other or stand alone well enough to keep the audience’s attention before the big reveal.

The second act has entirely different tone and gets at the dangers of constructing a society where certain people have to operate in secrecy in order to be themselves. O’Hara offers some comic relief with a lesbian “unwedding” scene, but there are also some more tragic sequences.

Sutter’s coming of age is paralleled with Michael Jackson’s maturation from the sweet Jackson 5 lead singer to the edgy, leather-wearing pop star who penned “Beat It.” This through-line is a not-so-subtle nod, not only to Jackson as an icon, but also to his suspected homosexuality and alleged pedophilia.

Black gay men especially constantly fight the perception that homosexuality and pedophilia are synonymous. During the 1980s HIV/AIDS epidemic, many Black men died, which led some people to believe that God must be displeased with gay people. This misconception still plagues the American psyche. In O’Hara’s play, he attempts to upend this idea by using humor.

However, when teenage Sutter tells his parents a man was following him home, his stepfather responds that he should play more sports. It’s hard to find the funny there, which is the point and the problem.

That seems to be the undercurrent of the entire play — extrapolating the dangers of meshing sex and shame. At the end of the first act, there’s a riotously funny phone conversation between four Black women, played by Asia Rogers (as Actor One) and Parris Sarter (Actor Three), about a woman named Adela wanting to name her daughter Genitalia. It’s definitely borrowing from the “Hair Piece” scene in The Colored Museum and getting at the absurdity of shame. Sarter is a delight to watch as one of the gossipy women and as Sutter’s mom, who is his confidant and the one who betrays him.

All of this unfolds on a colorful, wacky set, designed by Natalie Taylor Hart, that looks like something from a 1970s or ’80s variety show.

Bootycandy premiered at Woolly Mammoth Theatre in Washington, D.C., in 2011, just a few months before the U.S. military’s “don’t ask, don’t tell” policy was repealed. Over the course of two hours, O’Hara takes the audience on a ride through the ways that secrets kill — literally and figuratively. Though the Actor’s Express production feels too loosely formed at times, the point that laughter makes life more gummy bears than Jolly Ranchers is certainly not lost.