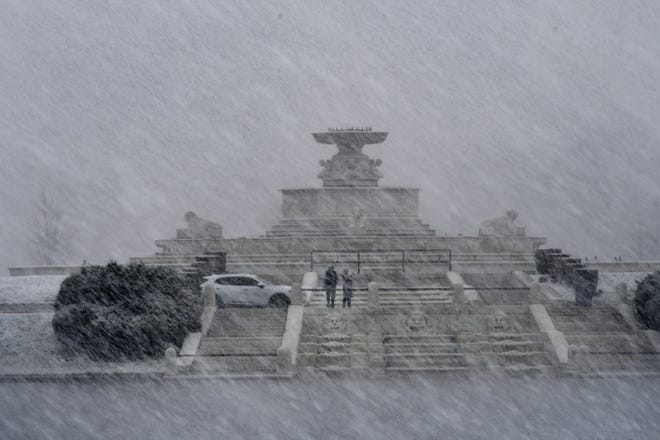 The start of the workweek brought snow after a sunny weekend that promised spring was finally here.

The National Weather Service had predicted up to 6 inches of snow in portions of Michigan on Monday, but the totals likely will fall much shorter. Local numbers are ranging from 2-3 inches, according the weather service reports Monday night.

“It’s really not that unusual” to see snow this late in April, said Trent Frey, a meteorologist with the weather service in White Lake Township.

“This is the third year in with measurable snow around this time,” Frey said. “Today’s accumulation won’t be 3.5 inches.”

Overall, the weather service estimates about 32% of their recorded years have seen measurable snow after April 15.

A low-pressure system moved through the northern Ohio Valley and dropped snow over the region, starting after noon Monday, according to Ian Lee, a meteorologist with the weather service in White Lake Township.

The spring snow came a little later than the last average measurable snowfall for the region, the weather service said. April 7 is usually the cutoff for Metro Detroit.

Monday’s precipitation likely won’t rise above the totals for the top 10 dates for snowfall:

A winter weather advisory was in effect for Huron, Tuscola, Sanilac, Lapeer and St. Clair counties until early Tuesday. For Oakland and Macomb counties, the advisory was to end Monday night with accumulations of 2-4 inches. The Thumb area could see as much as 6 inches.

The rest of the week will get warmer, though not necessarily drier: rain showers are expected on Wednesday, Thursday and Friday, but Saturday’s high could pass 70 degrees.