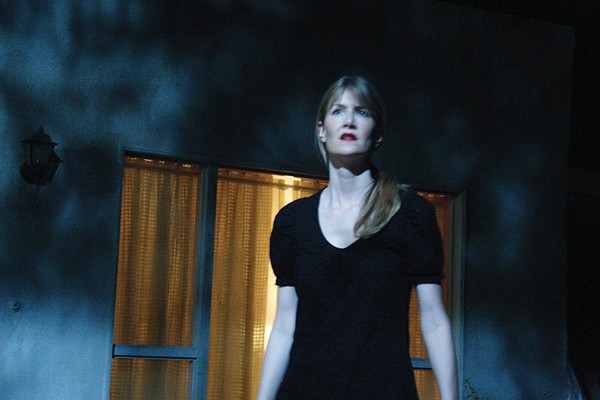 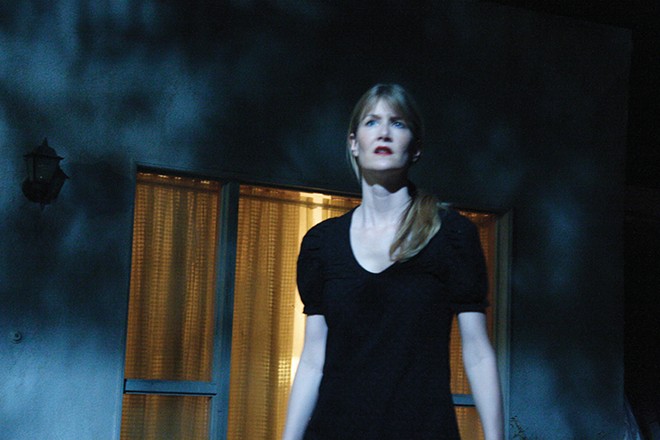 Not all movies press forward. In 2006’s Inland Empire, newly restored under the supervision of its enigmatic director, David Lynch, the film’s movement through time occurs on a looping track that cuts back across itself, with our guide (played by Laura Dern in a fractured starring role as film star Nikki Grace) getting just as lost as the viewer. The three-hour film, assembled over years from largely unstructured scraps of low-grade video, may strike some as just a reel of scenes, and a marvelous showcase for Dern as a performer, but it proves far more purposeful in its calibration of formal technique, narrative motifs, and internal rhymes, which serve together to create a feeling like nothing else.

After a brief overture, Inland kicks off in earnest when a Polish-born visitor (played by Lynch standby Grace Zabriskie, a sublime performer) comes to Grace’s palatial home, introducing herself as a new neighbor and suggesting it’s important to say “hello.” This last word, puncturing the sentence it appears in with a jarring, eerily singsong air, forecasts Inland’s power to locate the uncanny in the mundane. In the teatime meeting, the visitor seems frighteningly omniscient, pressing folktales, portentous questions, and seeming non-sequiturs in Grace’s direction, and provides the first signal that Grace, who’s in the running for a plum melodramatic role, might be getting more than she hopes in the process. Many a keystone to the film’s structure can be found in the frame this scene provides, which suggests the imminent production is a somehow cursed one, offering prophetic ruminations on action, consequence, identity, and even time.

But Inland aims to conserve rather than resolve its sense of mystery. Even for those equipped with the right tools to parse the web of meanings, they only provide a means of digging deeper into the film’s thematic-narrative textures rather than of closing anything off. Intersecting with the artistic work of Grace herself, Inland finds its protagonist sinking deep enough into her character that her life and existence apart from it become subsumed into the role. As with Dern’s own delving into an at-first dutiful, then constantly evolving performance, the viewer’s process is more about investigating a feeling than seizing upon anything resembling a single origin, problem, or cause. Like so much of the best artistic work, Inland Empire exists for its makers first, offering probing considerations of acting, film production, role confusion, and even sex and fame within its fabric. In this, what it offers proves inviting, even intimate, as a viewing experience; each scene has an internal logic to it, even read in isolation from its wider, richer context.

Because of its intense peculiarities, describing Inland Empire could come down wholly — and rewardingly enough — to enumerating all that distinguishes its immediate formal aspects while ignoring the structures that undergird this work. Shot on low-grade DV cameras, the word “smeared” arises often for those describing the blurred, rough-hewn quality of its digital images — which can scan as the photographic equivalent of painting with a knife. With its probing handheld photography and consumer-grade setup granting Inland an ease of movement and air of experimentation rare for productions of its time with recognizable stars, Lynch uses that freedom not to chase anything too buoyant but to give the film a feeling of descent: an aesthetic, even spiritual movement venturing both inward and down. To this end, Lynch culls Inland’s most representative images from mobile shots of darkened halls, alleys, and studio soundstages, with light sources swinging from searing to sparse between carefully deliberated cuts driven by intuition over action. When the camera does settle on actors’ faces, the effect is rarely any calmer but remains just as atmospheric. Framing performers often in extreme close-ups or off-kilter angles, Lynch’s camera can seem to scoop up actors’ faces and hold them toward its wide, distorting lens, finding them partway ripped from the fabric of the film itself, quivering tenuously between the film’s world and ours.

This tension around identity, in which roles (and their accompanying status) become scrambled and upended in ways mediated by one’s surroundings, lies not only at Inland’s center but close to the heart of Lynch’s entire body of work. Pressures around acts of private and public recognition abound in the film, and not without purpose or effect. (Critic Melissa Anderson points to the film’s often-spoken phrase “look at me.”) Emphasizing that identity and self-concept can be as flimsy as any mood or feeling, Inland calls attention to fame, value, and recognition as things bestowed in part by others, not just generated by oneself. These notions of value accompany the film’s various slides, from Hollywood to Poland in ellipses found in dreams and doorways, its movements up and down vectors and settings associated with various levels (or lacks) of prestige and class, and Grace’s flights into and out of different character personas. Like Twin Peaks before (and, thankfully, after) it, Inland holds ripe melodrama close to its center, spotlighting its eruption through regionalized scrims of manners into fits of aching need. Between the film-within-a-film in which Dern stars and the shifting roles she plays that move around and through it, Dern’s given range of expressive, often discordant material she’s equipped to make the most of.

Through it all, boundaries between spheres like the public and private, the artistic and “real,” come across as both meaningful and delicate, or thin. Solitary beams of light stream through holes and walls and windows, delivering ruptures that appear like little so much as they do a video being projected. Rather than providing even the illusion of a “clean break” as films like Lost Highway at first pretends to, or the fairly definite shift in roles that rips apart the players in Mulholland Drive, Inland’s structure curls. By replaying the same incidents, with perspectives altered each time in the ways that make a “scene,” Lynch insists that the lines we work to draw between ourselves and creative work are dangerously fine. Lynch suggests the ways we map the world, chart our personal progress, and even demarcate time can be both futile and misleading.

All this might sound heavy to spend three hours on. Inland Empire also works just fine as a feast of textures, and an exploration of haunting atmospheres conjured from the deep recesses of collaborating minds. Its looping structure and tangled themes all serve much the same ends, coming together to make a rich and newly polished bit of existential art.