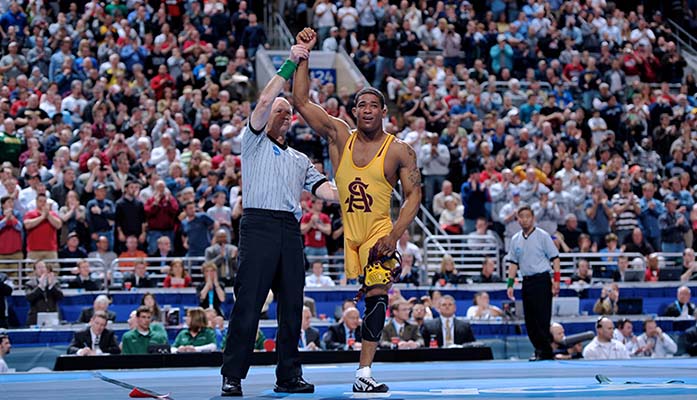 MESA – What has defined him has also shaped him. Anthony Robles, often identified as “the wrestler born without a right leg,” can now also be known as “head wrestling coach, Mesa High School.”

The 2011 NCAA champion at Arizona State recently was named the replacement at his alma mater for David DiDomenico, who retired after last season.

“It’s just the perfect environment,” he said. “For me, I’m just happy to be back home.”

Since graduating from ASU, Robles, 33, has worked as a motivational speaker and wrestling commentator for ESPN. Last year, he joined Mesa High as freshman wrestling coach.

It didn’t take him long to land the head coaching job.

“After the season, we gave Anthony a little more leadership opportunity, and he blossomed,” DiDomenico said. “He is a homegrown guy. He’s a Mesa High grad. He’s an ASU grad. So it’s nice to see one of our own be successful.”

His experiences – as a competitor, commentator and motivational speaker – helped mold him into the ideal fit for the job.

“We ask ourselves, what is best for our kids, and we felt that through the process and looking at the different candidates that he stood out with how he connects with kids,” athletic director Jason Schnittger said.

If Robles relates well with the athletes, it’s because he was one of them not so long ago.

“He’s from the neighborhood, and so I think that connection, knowing where you came from and where you can go, is another thing, too,” Schnittger said.

Given an opportunity he describes as a “dream,” Robles is excited to take over the program and continue the traditions that he helped build during his time as a wrestler.

Attacking challenges has always been his forte.

Robles was born without a right leg. Doctors couldn’t offer his 16-year-old mother, Judy Robles, an explanation, but she had one for her son, suggesting divine intervention.

“I was made this way for a reason,” he said.

Robles struggled to find his purpose until wrestling found him at 14.

When he started, he was only 90 pounds and struggled. That didn’t stop him from quickly embracing the sport.

“The first time I stepped out there in a practice room, I got my butt kicked,” he said. “I just fell in love with the mentality that it takes to be a wrestler because you put your body through a whole lot of pain, and it’s grueling. I just loved how it didn’t matter if I was the biggest guy, if I was the tallest guy, or if I was missing one leg or two legs. You just focus on what you have and don’t use your challenges as an excuse.”

Despite early struggles, Robles was determined to improve.

As Robles improved his craft and abilities on the mat, success came with it. He credits his coaches with helping him develop techniques that turned his physical limitation into an advantage.

“It was amazing. I owe a lot of that success to my high school coaches,” he said. “They took the time to really help me to develop a unique style of wrestling because we understood that that’s what it was going to take, and nobody could really prepare for it.”

At Mesa High School, he finished his junior and senior seasons with a 96-0 record, two state championships and a national title.

Despite his success, he wasn’t highly recruited by colleges. Robles ended up walking on at ASU, where he continued to overcome the odds, winning three Pac-10 championships, earning All-American honors three times and culminating his career with a national championship.

“Arizona State gave me an opportunity when most wouldn’t even give a chance, and being the hometown boy to bring a title back home, it’s super special,” he said.

For the students under his wing, they will see someone who personifies resilience and a never-say-quit mentality.

“Anything’s possible with hard work, determination and just believing in yourself,” he said.