‘Absinthe’ reaches a landmark number of performances in Las Vegas 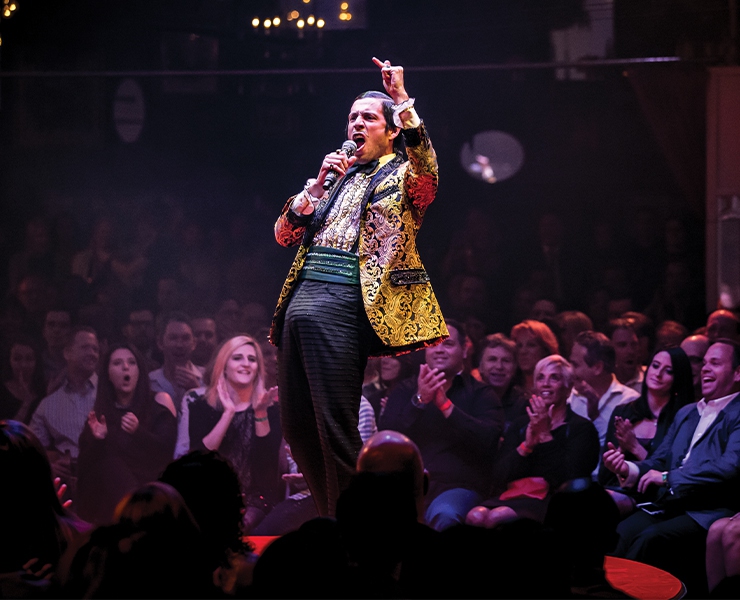 One day, as the Gazillionaire was having his usual breakfast of black coffee, toast and self-admiration, he had a vision: He would pitch a tent right in front of Caesars Palace. It would be home to a new form of entertainment featuring spectacular acts, degenerate humor and lap dancing. Inspired, he drank from a bottle of green spirit provided by his loyal confidante Wanda Widdles and dreamed up the blueprint for what would become Absinthe.

As of June 2, Absinthe had been performed 6,000 times inside the spiegeltent on Caesars’ Roman Plaza. The Gazillionaire was nearly $6 million in the hole that night after Widdles got carried away while filling out a check for the winners of a $6,000 lap dancing contest. Not that it would matter, for despite The Gazillionaire’s appearance and iconoclastic approach to personal hygiene, he’s got the green.

That’s why he can afford The Green Fairy, who appears at the beginning of the show to a man who appears to be hallucinating after partaking in an intoxicating emerald-colored libation. Maxim demonstrates his newfound super strength and superior sense of balance by building a mountain of chairs that he remains atop as it reaches higher and higher toward the top of the tent.

He’s the first of a cavalcade of daredevils, skilled acrobats, unusual acts and traditional talents that have validated the Gazillionaire’s delusions of grandeur more than 6,000 times. “Gaz” is as filthy of mouth and mind as he is rich, frequently indulging his fondness for insult humor at the expense of unsuspecting audience members.

Widdles gleefully punctuates his psycho-spiel with rimshots from her trusty snare when she’s not tossing perverse word salads. She clears out when superbly muscled specimens of human beings begin courting danger via velocity, feats of strength and high-flying maneuvers.

A roller-skating duo becomes a spinning tornado. A gorilla performs burlesque. Ming and Alexa hold onto straps as well as dear life as they execute airborne choreography. An Adonis with a chiseled physique and wet jeans splashes in and above an onstage bath. Tap Twins Sean and John Scott bring it on home with a freewheeling dance routine.

There’s also They Who Cannot Be Named, an interpretive dance duo wearing costumes that reveal a little too much and are often on the verge of malfunctioning. It may be the most unintentionally vulgar act on the Strip.

Gaz has no fear of being dragged into court on obscenity charges. He has the best attorneys who will work for free tickets. He’s not writing any more $6,000 checks, but amateur lap dance contests will continue. It’s onward and upward to the gazillionth Absinthe show. How many that is exactly nobody knows, except the Gazillionaire.

Click here for your free subscription to the weekly digital edition of Las Vegas Magazine, your guide to everything to do, hear, see and experience in Southern Nevada. In addition to the latest edition emailed to every week, you’ll find plenty of great, money-saving offers from some of the most exciting attractions, restaurants, properties and more! And Las Vegas Magazine is full of informative content such as restaurants to visit, cocktails to sip and attractions to enjoy.