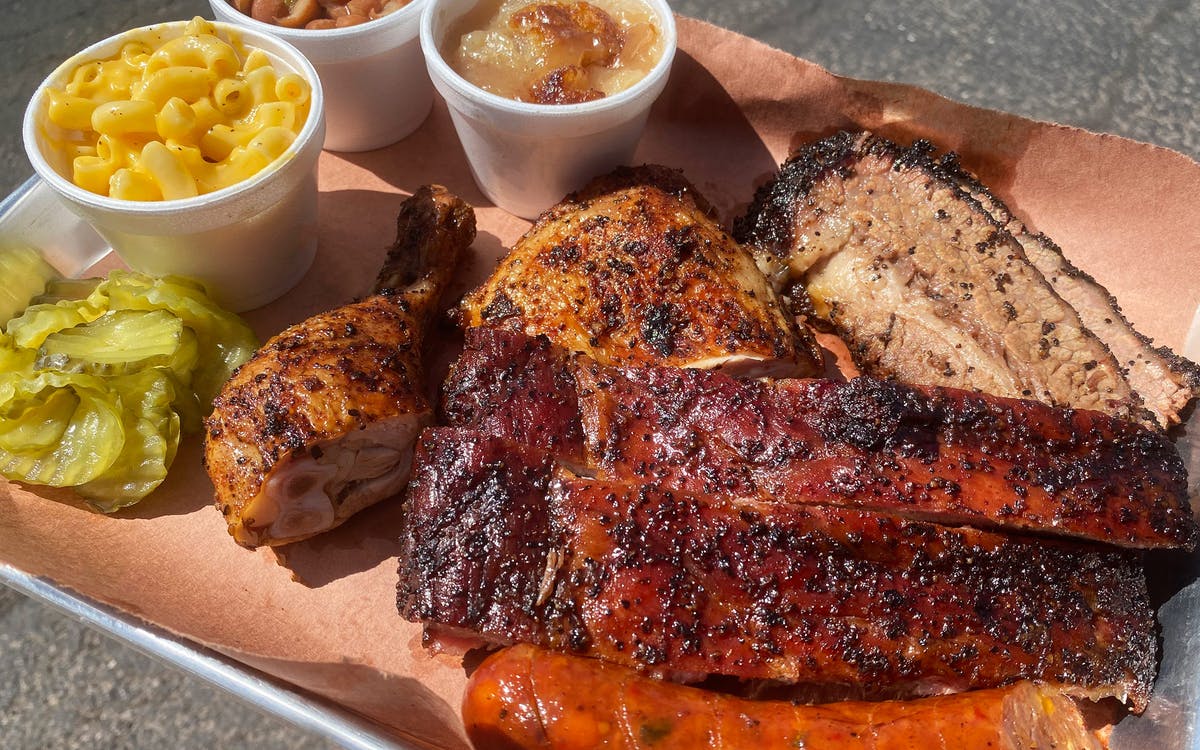 Barbecue excitement doesn’t come to Odessa very often. Local stalwarts Jack Jordan’s Bar-B-Que and Johnny’s Bar-B-Q are both in their seventh decades of business. The last time I had reason to travel to the West Texas town on a barbecue trip was after Ed & Tom’s Bar-B-Q opened six years ago. There hasn’t been a whole lot in between or since, so I was skeptical about the praise I heard for Brantley Creek BBQ & Co. But the food truck that’s been serving out of the Odessa Camera parking lot since late 2019 is good enough to make Odessa a barbecue destination, and not just for Midlanders.

“The bills didn’t stop coming, so we had to do something,” said Brandon McPherson, who lost his job on a pipeline crew when Flint Energy Services closed up shop in Odessa in 2019. Two weeks later, he and his wife, Ashley, had opened Brantley Creek BBQ to the public. (Colby and Kylea Johnson, their nephew and niece, also work for the business.) Thankfully, they already had a food truck from Brandon’s days as a competitive barbecue cook. He had competed in International Barbeque Cookers Association events around West Texas, but he hadn’t gotten much farther than San Angelo and Lubbock when the competition circuit lost its luster. “[The flavors of] competition barbecue weren’t my cup of tea,” he said. He was happy to be cooking the barbecue he liked for the public.

Growing up in Odessa, McPherson wasn’t exposed to much barbecue variety. His dad took him to Johnny’s for barbecue sandwiches, and more recently, he tried Brick Vault Brewery and BBQ in Marathon, but most of his barbecue education came through trial and error. McPherson credits his late grandfather David with planting the seed for his own love of smoked meats. “There are many times now when I cook that I smell the same smells as I did in his backyard,” he said.

After he opened Brantley Creek BBQ, McPherson didn’t sniff success for months. He bottled a line of seasonings and sauces for local grocery stores but stopped after slow sales. “I lost more money on the seasoning thing than I made,” he admitted. As was the case with many food trucks, Brantley Creek’s popularity grew after the COVID-19 pandemic closed down so many restaurant dining rooms in 2020. A few months later, the business added a 250-gallon smoker and a 1,000-gallon model to increase output. Every week, McPherson says, they cook more and sell out sooner. Customers are now coming in from as far as Lubbock, two hours away.

The rewards for those barbecue hounds headed to Odessa are brisket and spareribs as simple as they come. McPherson uses nothing but kosher salt and sixteen-mesh black pepper to season both. He uses a blend of post oak and mesquite wood trucked in from east of Abilene, which for anyone in Odessa is considered East Texas. The rib bark shimmered with moisture, and the pork flavor came through along with the smoke in every tender bite. The fat was well rendered on the brisket slices beneath the black crust. Juicy slices easily pulled apart. It’s easily the best brisket-and-rib combo I’ve had in Odessa.

The seasoning on the chicken is a bit more complex, and it goes deep into the meat. With crisp skin and a juicy interior, this was some excellent smoked chicken. A link of jalapeño cheese sausage from Miiller’s in Llano was fine, but McPherson said he has bought equipment to make his own sausage from all the brisket trimmings he has stored up in the freezer. It’ll be added to the menu soon.

Ashley makes the sides, and there isn’t much out of the ordinary. I had a good, creamy mac and cheese and well-seasoned pinto beans. The star was a cup of apple cobbler, made from Ashley’s grandfather’s recipe, that leans more toward cake than pie.

It’s been a rewarding few years, McPherson says, but running a food truck in windy West Texas is a challenge. After the meat is done cooking, he loads the trailer, drives to the site, serves food, then cleans up before hauling everything back home to start cooking for the next day. That should all change by fall of this year. Brantley Creek BBQ will have a brick-and-mortar restaurant on Faudree Road on the east side of Odessa. They’ll be able to park the food truck for good, and folks in Midland won’t have so far to drive for the best barbecue in Odessa.