Whoa, Nellie! “Little House’s” Alison Arngrim to tell all at Out Front Theatre 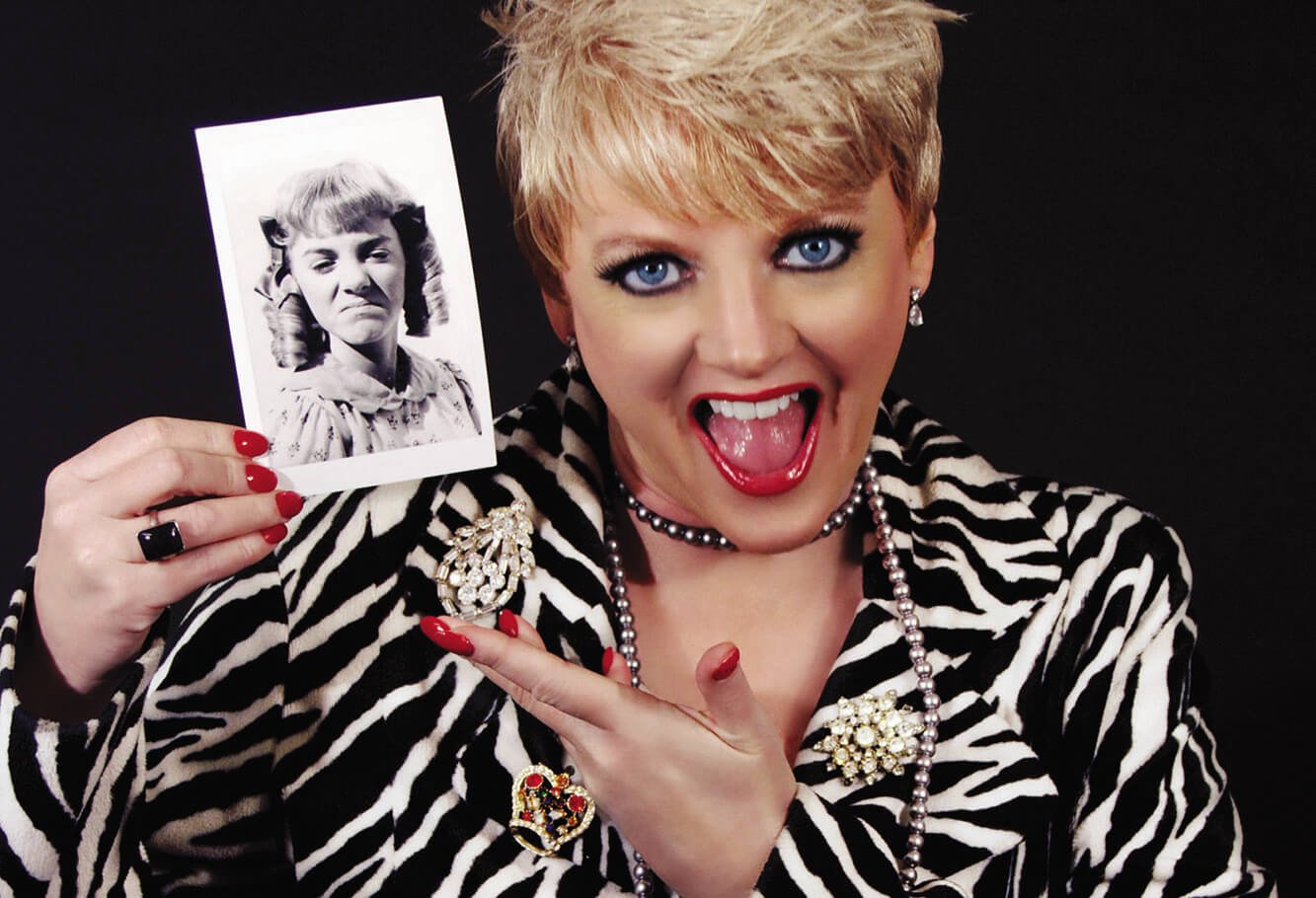 Unlike Nellie Oleson, the sneeringly snobby, sausage-curled nightmare she played for seven seasons in 1970s television’s immortal Little House on the Prairie, actor Alison Arngrim could not be warmer or more down to earth. Equipped with a dry sense of humor that’s probably the best survival tool a former child star could wish for, she’s quick with a laugh or a self-effacing joke — and adept at handling every possible oddball interaction with fans of the show.

On Saturday, Arngrim will pour her unique perspective, experiences and up-close vision of the deranged side of fame into her touring one-woman show, Confessions of a Prairie Bitch (also the title of her autobiography), in a one-night-only performance at Out Front Theatre. It’s a show that has evolved over two decades to incorporate video clips, costume changes and an “Ask Me Anything” Q&A segment with the audience at the end. She’ll draw on her stand-up comedy chops to address “the many elephants in the room.”

Arngrim grew up in Los Angeles as part of a show-biz family. In fact, her mother was best known as the voice of both Casper the Friendly Ghost and Gumby. In 1974, when Arngrim was just 12, she landed the role that would change her life, as Walnut Grove’s nemesis to Melissa Gilbert’s plucky protagonist Laura Ingalls. Michael Landon’s show was based on Laura Ingalls Wilder’s best-selling autobiographical books about life on the frontier.

After the series ended, Arngrim worked as an activist in the HIV/AIDS movement of the 1980s. As a survivor of childhood sexual abuse, she also has been a strong advocate for legislation to protect children, including kids working in entertainment.

Ahead of her Atlanta stage debut, ArtsATL spoke with Arngrim (answers have been edited for length and clarity).

ArtsATL: I’ve got to say, I’m a little star-struck because I watched your show. . .

Alison Arngrim: Oh! Are you a Bonnethead? I remember Melissa Gilbert and I were trying to figure out what to call our fans, and she said, “Is it ‘House-ies?’” I said, “I think it’s ‘Bonnetheads.’” We do have the hardcore fans. Our Trekkies (Star Trek fans) are Bonnetheads.

ArtsATL: You’ve spoken about making appearances at some of those “Bonnethead” gatherings. What’s that like?

ArtsATL: Perhaps that’s a testament to how vividly and realistically the characters were portrayed.

Arngrim: We were very convincing. When people tell me, “I hated you on the show. I wanted to reach through the TV and punch you,” I always say, “Thank you! You’re telling me how good I was at my job.” The gang from the show, all of us in the cast, we get that the show hit such an emotional chord with people, especially if they grew up reading the books and watched the show as children. We’re just amazed that people were still watching us almost 50 freaking years later all over the world.

ArtsATL: How did you come to embrace Nellie Oleson as someone who would be with you for the long haul?

Arngrim: Right, she is sort of like my evil, invisible twin or alternate personality that doesn’t go away. When we started the show, none of us had a clue. Well, Michael (Landon) had a clue. He told people, “When we’re all dead and gone, they’ll still be watching these episodes.” And everyone would say, “Oh, yeah, he’s really lost it now.”

The idea that it would last or that millions of people would watch it over and over was a completely alien idea. A few people on the show didn’t even sign contracts because they initially thought it wasn’t going anywhere. My father said, “Who’s gonna watch this?”

Around the second or third year, though, I started to realize something was going on. I knew I hit a nerve because I had people reacting very strongly and freaking out. In the ’90s I went, “This is never going away.” I could have plastic surgery, change my name, try to find another country to move to, but, no, I’m going to have to find a way to live with the fact that this is probably a permanent condition. I need to embrace it. Otherwise, I’m going to spend every single minute of every single day telling people, “Stop talking about Nellie Oleson,” and that’s just not going to work.

ArtsATL: In your book, you talk about people suggesting plastic surgery as a way to break free from the character . . .

Arngrim: Exactly. That was the rage. I was 18 or 19. Now people look askance and go, “No, not really a good idea.” But then it was considered completely normal to tell someone who’s barely out of their teens to go do this for themselves.

I mean, my agent would submit me for parts, and they’d all come back and go, “No, she’s not right. This takes place in present day.” And he said, “Well, she’s not Pioneer Barbie.”  It was like, well, maybe if I have some massive transformation, that will help. But then what happens 20 years down the road? Is that something I really want to do for the rest of my life? And I didn’t.

ArtsATL: You wrote about how it was a catharsis to play someone mean, given that you are a survivor of abuse. Have you heard from fans who may have found Nellie to be someone through whom they could experience a similar kind of catharsis?

Arngrim: And vicariously vent their anger, yeah, absolutely. First of all, the show dealt with everything from child abuse to alcoholism to people overdosing on morphine. People got a lot out of it. Many people who had horrible, horrible childhoods, very abusive, loved Little House. A number of people I’ve met said, “I would watch and pretend that my parents were Charles and Caroline, that I lived somewhere else and my family wasn’t my family. That this was my family, and it was all going to be OK.”

Some people did identify with her. They went, “Well, of course she’s miserable. Look at her mother. What must be going on at that house? Poor girl, she’s acting out. Of course she’s jealous of Laura with the perfect family. Of course she was angry and doing all these stupid things.”

ArtsATL: So, you’re bringing Confessions of a Prairie Bitch to Out Front Theatre. How have Nellie and your show resonated within the gay community?

Arngrim: Early on, a lot of people in the gay community saw Nellie and Mrs. Oleson immediately as camp. They went, OK, this is high camp, this is drag. And essentially, I was in drag with the whole wig and the whole outfit. I have met people who said that Nellie was their first diva.

A lot of gay people growing up said, “I would watch the show and say, ‘If only my parents were Charles and Caroline, I could have come out to them.’”

ArtsATL: How has Confessions evolved?

Arngrim: I started in 2002, so over the years, absolutely, things have come out and gone in. My favorite thing is the Q&A. I have cards printed to say, “Ask Alison Anything.” And we distribute those beforehand, and people tend to write whatever, which may be insane or embarrassing or hilarious or dirty. They cannot say it, but oh my god, they’ll write anything on a card.

ArtsATL: Who are your comedy influences?

Arngrim: I grew up watching George Carlin and Carol Burnett. When I was little, I remember being fascinated that part of (Burnett’s) show was simply coming out and talking to the audience and answering questions. I remember thinking, “Is this a thing you can do? As a job?” And I have to give props to Bette Midler.

ArtsATL: All the Little House characters were hardy, displaying survival skills on the prairie. So, who of them would be most likely to survive the Zombie Apocalypse?

Arngrim: I think the Olesons would be terrible. Miss Beadle would send the children home early and they would all get eaten by zombies. I think Pa and Ma would have it down. You remember when Ma would sit in her rocking chair with the rifle on her lap when she was alone and Pa was away? And Pa, of course, has the ax. Albert was always very conniving, always had a plan, and could think on his feet. So, I’d put my money on them.

ArtsATL: If you were going to cast a reboot of Little House, who would play Nellie and any other central cast members?

Arngrim: Well, I have dibs to come back and play Mrs. Oleson, because I’m the right age now. Randy Havens, the teacher on Stranger Things, should play Mr. Oleson. Jason Momoa as Charles Ingalls. He’s definitely got the chest for it. Who would be Nellie now? Is Elle Fanning too old? The British girl who’s Eleven in Stranger Things (Millie Bobby Brown), she’s got the chops. And she’s in a wig already. She could do it. We’d get Benedict Cumberbatch as Doc Baker. And Jessica Chastain as Ma, who I can see brushing her hair by the fire.

ArtsATL: If Nellie was the lead singer of a punk rock band, what would the band’s name be?

Arngrim: (Laughs.) This is amazing — um, what would we be? All our furniture is bought and not made, so Boughten Furniture. First album title — I Hate My Mother. With the song “You Smell Like a Dirty Horse.” I mean, I’m going to have to do this!

Alexis Hauk has written and edited for numerous newspapers, alt-weeklies, trade publications and national magazines including Time, the Atlantic, Mental Floss, Uproxx and Washingtonian magazine. Having grown up in Decatur, Alexis returned to Atlanta in 2018 after a decade living in Boston, Washington, D.C., New York City and Los Angeles. By day, she works in health communications. By night, she enjoys covering the arts and being Batman.