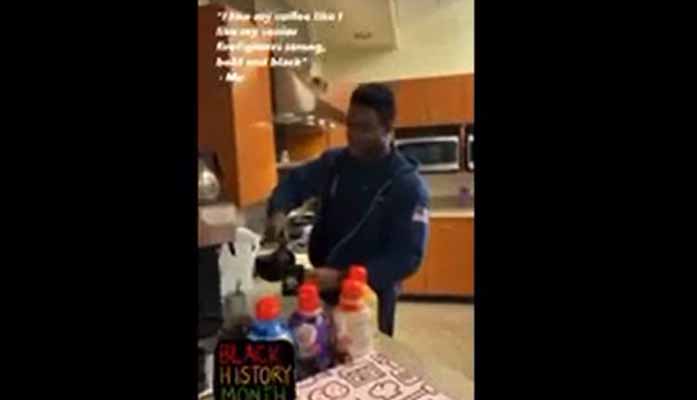 Two first responders with Gilbert Fire and Rescue are reeling after a seconds-long skit they posted to TikTok resulted in the accusation that one of them is a racist. Firefighter Reynolds, who is a White male and Firefighter Foday, who is a Black male, never though their joke about coffee could land one of them in hot water.

He wrote, “It’s only racist if you want it to be… Right? Firefighter in Gilbert, AZ is under investigation and may be terminated for joke deemed racist by woke city officials. The only problem is the Black guy in the video is his friend and was in on the joke!”

“Like the ASU professor who accused a Black DJ of wearing blackface,” wrote Harris referring to ASU Instructor Stuart Rhoden, “the Gilbert Town Council is accusing a Black and White cop of being racists for a skit. You can’t make this stuff up.”

Gilbert’s Mayor Bridgette Peterson claims to be a social justice warrior and friend of first responders, but according to sources inside the Town, she and her team are always on the lookout for an opportunity to find racism.

As noted by Harris, Firefighter Reynolds is close to retirement but may see his career go up in smoke for the video and other statements he has made on social media.

A reference to the other social media post is referred to on the Notice Of Performance Inquiry filed by Supervisor Assistant Fire Chief Bob Badgett:

On May 10, 2021 Josh posted a video on Twitter under the handle @_SWAG_Hockey. The video portrays Gilbert fire engine 2510 at a Gilbert fire station with a Thin Blue Line flag mounted on the back. The post tags the official Twitter account of the Town of Gilbert and the Gilbert Police Department, and the Gilbert Fire Department, and the Police Chief. The post states, “F2510 is standing up and supporting our police officers. RIP to Officer Farrar and continued prayers to Officer Aranda on his recovery. We will never turn our back on you guys, and we support you always.” A song accompanies the videos with the following lyrics: “If you were born in this country, raised in the country, back the blue. You got it back the blue. If all lives matter, blue lives matter too. Back the blue. You’ve got a back the blue.”

By tagging the Gilbert Twitter account, the Police Department the Fire Department and the Police Chief, holding himself out as a Gilbert employee and speaking in terms of “we” in his May 10th post, Josh purports to speak on behalf of the Town and other employees. Josh is also expressing in his political opinions while holding himself out as a Town employees. His post gives the appearance of the Town and his coworkers have a certain political position on the topic Of Blue Lives Matter.”

The Town has retained the services of LaCoya Shelton, and her team at Revolutionary HR Consulting to investigate the matter. Shelton, who claims to be described by others as “her own geoseismic event” and “a force for good,” will lead, according to sources, a workplace investigation of the seconds long Tik Tok video and the Back the Blue statement.

The Town of Gilbert has earned a reputation for spending a considerable amount of money on friendly firms that are expected to deliver the desired judgement while eliminating any perception that there exists a conflict of interest for Town officials.

“It is inconceivable that anyone in Town leadership would not support backing the blue, so it just seems like an excuse to throw money at more friendly consultants, but who knows, maybe Peterson has turned everyone into cop-haters. Nothing would surprise me about this place,” one Gilbert resident told the Arizona Daily Independent.