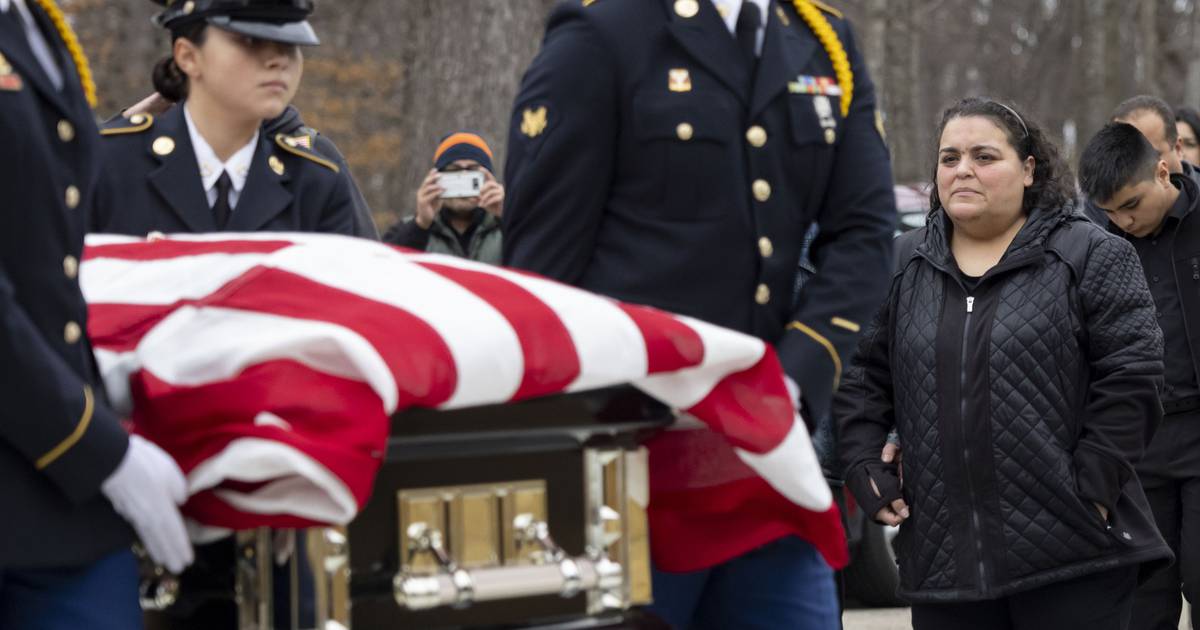 The 42-year-old Wheaton native died Nov. 22 after developing pneumonia and kidney problems. He had been living with quadriplegia since breaking his spine in two places while on a combat mission in 2004.

He was buried at Abraham Lincoln National Cemetery in Elwood, becoming one of more than 4,400 U.S. military members who have died from injuries suffered during the war.

Escorted to the site by the Patriot Guard Riders, Gomez received a rifle salute at the start of the service, signifying his contributions in the Army. A bugler played taps as soon as the volleys stopped echoing in a strong November wind.

At the end of the ceremony, the American flag draping his casket was folded into a triangle and presented to his sister, Noemi Sanchez, a working mother of three who oversaw much of Gomez’s nighttime care since his injury. Both his parents died within the past few years.

Gomez suffered his devastating injuries March 17, 2004, when the armored vehicle he was riding in toppled into the Tigris River while on a mission to capture enemy soldiers who had been firing on his base. It’s unknown whether an explosive device was the cause or if the road crumbled under the Bradley Fighting Vehicle’s massive weight.

He woke up a week later at an Army hospital in Germany, unable to move his arms or legs. He would never again walk, feed himself or breathe without a tracheotomy tube.

The Wheaton community rallied behind the family, raising money to build a fully accessible, 2,100-square-foot house on the southeast side of town. Private donors collected about $300,000 for the home, while 52 contractors, subcontractors and laborers donated materials and time totaling about $375,000. Gomez moved into the home in September 2005, more than a year after being injured.

At a prayer service Monday evening, friends and family described Gomez as a man who never lost his sense of humor nor his passion for learning after his injuries. They recalled how he played pranks on his caretakers, read books, watched documentaries and kept a globe near his bed so he could discuss international issues with people.

“I learned a lot from Joey,” said his friend Terry Masterson, “but the thing I learned most was how great the human spirit was.”

Masterson, who ran the neighborhood Boys Club that Gomez belonged to in his youth, acknowledged the price the soldier’s entire family paid for his sacrifice. His sister took care of him during her off-work hours, and his niece and nephew — just young children at the time of his injury — spent their childhoods visiting him in hospitals and helping care for him at home.

Gomez remained a doting uncle throughout his life, offering financial and emotional support to them as needed.

“Everyone has a person,” said his niece Sonia Sanchez. “My uncle was my person.”

Mourners also paid tribute to Gomez’s longtime caretaker, Elva Cuahquentzi, who had returned home to Mexico to deal with an immigration issue and had not yet been permitted to return. Her departure forced Gomez to move into a nursing home last month, where he developed pneumonia within a few weeks of arriving at the facility and was so frightened by the level of care, he asked Masterson to call 911 and have him taken to a nearby emergency room.

Gomez spent his last conscious days asking for Cuahquentzi and dreaming about returning to the accessible home built specifically for him by the Wheaton community.

Cuahquentzi, 50, remains in Mexico awaiting word on her immigration application. Her son Emmanuel Perez, however, read a letter from her during the service. She described Gomez as her purpose in life and said she loved him as if he were one of her own children.

“Learning to love Joel was easy,” Cuahquentzi said in her letter. “Forgetting Joel will be impossible.”