What happened in latest ‘debate’ in Arlington Heights 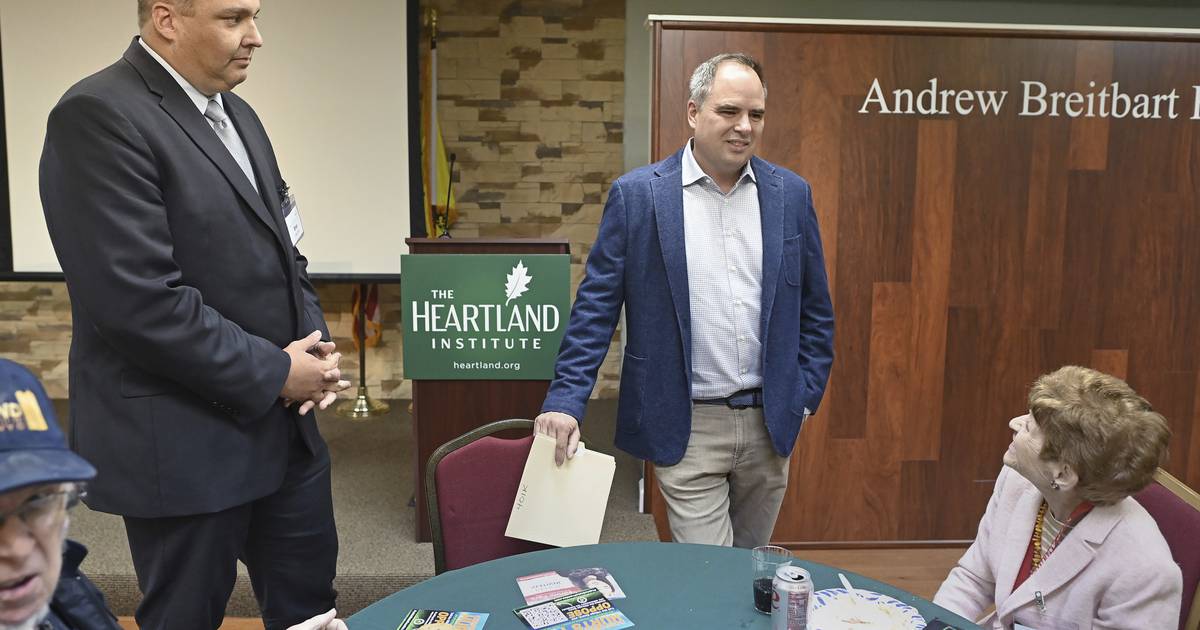 Residents of the northwest suburbs were skeptical Wednesday about infrastructure changes and using taxpayer dollars to fund the Chicago Bears’ proposed redevelopment of Arlington Park International Racecourse at an event hosted by a pair of libertarian and conservative groups.

The event, advertised as a debate and titled “Don’t Feed the Bears…?” is the most recent in a string of initiatives by the libertarian political advocacy group Americans for Prosperity opposing the use of public money in any Bears-related development in Arlington Heights. The group is funded by the conservative billionaire Koch Brothers. The Heartland Institute also opposes using public money on the team.

Many of the 20 attendees who spoke to the Tribune were regular eventgoers at the hosting Heartland Institute and said they arrived opposed to the use of public money for the stadium and accompanying mixed-use commercial and residential district the Bears have pitched.

Jim Lakely, the Vice President and Director of Communications for Heartland Institute, said the group had invited Arlington Heights Mayor Thomas Hayes and other village leaders to participate in the debate Aug. 29, but that Hayes had declined.

Most people who came out to the Heartland Institute’s Andrew Breitbart Freedom Center were not from Arlington Heights but nearby communities like Palatine, Wilmette or Rolling Meadows. Americans for Prosperity Illinois Deputy State Director Brian Costin later said they hoped to reach more residents of Arlington Heights via the event’s livestream, but noted that the Bears’ possible redevelopment of Arlington Park would make an impact on the entire region.

[ [Don’t miss] Will the Chicago Bears leave Soldier Field for Arlington Heights? Here’s what to know. ]

Jean Link, 73, of Arlington Heights, came ready to learn, knowing she’d be directly affected if the Bears finalize their $197.2 million purchase agreement for the site.

Link said she’d been to Heartland Institute functions before but attended Wednesday because she was “interested in the tax situation.”

“I understand that the Bears organization will be funding the stadium,” she said.

A rendering released by the Chicago Bears shows the view from the threshold of the proposed stadium of the Arlington Park entertainment district. The Bears released proposed development plans for the Arlington International Racecourse property in Arlington Heights on Sept. 6, 2022. (Hart Howerton/Chicago Bears)

But, she added, she expected Arlington Heights taxpayers would end up on the hook for at least some of the redevelopment costs at the 326-acre site.

Bears leadership has said the team will only seek public funding for the mixed-use development they have proposed building beside the stadium.

At a Sept. 8 public meeting coordinated by the team, Team President George Halas McCaskey said without public support on infrastructure, “the project as described tonight will not be able to move forward.”

“I want to understand what participation is expected of the people who reside in Arlington Heights,” she said.

For Link, of Arlington Heights, the event “confirmed that the Bears do plan to subsidize their own stadium, but all the other buildings in the area would be subject to taxes in the community.”

Link said she disagreed with that approach.

She was also concerned with some of the traffic and infrastructure concerns other event goers had raised.

“I live north of where the stadium would be built,” she said. “I will be impacted by the traffic.”

Specifically, Link said, she was worried about what would happen to Route 53 if the Bears land in Arlington Heights.

That was the prime concern of Anthony Ciani, 45, of Palatine. He said he lives near Route 53 and that he anticipated the Bears’ arrival in the area would necessitate an expansion for that road.

Ciani said he feared the Illinois Department of Transportation would make an expanded Route 53 into a tollway.

“All of these communities around here will become toll locked, so you really won’t be able to go anywhere without using the tollway,” he said. “That’s probably the biggest concern right there.”

Ciani said he saw some appeal to having the Bears redevelop Arlington Park. But “think about it this way,” he continued. “They’re going to need to redo the sewer. They’re gonna need to do some roadway, some on-ramps. It might come out to $500 million.”

Ciani estimated that the Bears would spend around $4 billion on the project overall.

Compared with the overall cost of the project, Ciani said he thought “the Bears can easily include [infrastructure] in any plan that they’ve got.”

Terry Przybylski, 66, of Des Plaines, said his main takeaway from the event was that “pro football is an exceedingly big business,” though he said he understood the motivation for a team to seek public financial assistance for a project like Arlington Park.

“They must feel they’re in a very unsatisfactory situation in Chicago right now,” he said.

But Przybylski left the presentation unsympathetic to the Bears’ request.

“I really don’t think the use of public funds is really justified for a business that is going to be dealing billions of dollars, when there are other very pressing concerns that state local governments have,” he said.

Hayes has said that using taxpayer funds to bring the team to the village is a “last resort.”

Without representatives from the village in attendance, Heartland Institute President James Taylor made what he called a “devil’s advocate” argument for publicly funding the project while Costin, of Americans for Prosperity, ran through arguments against public subsidies for the project.

Costin’s presentation focused on the possible impact of a tax increment financing, or TIF district, that Arlington Heights could establish as a way to help fund the infrastructure associated with the mixed-use commercial and residential development the Bears have proposed.

TIF districts work by freezing property taxes in a given year and using tax revenue that comes in over that set level to pay for infrastructure improvements to the area. Usually, a TIF district has an expiration date after which point tax revenue would flow as usual to different taxing bodies.

Costin told the audience that while a TIF district might not directly subsidize the stadium, “[the Bears] could use the stadium to take money from the taxpayers and put it in their other pocket.”

“The property taxes that they pay would come out of their left pocket, go into the TIF district, and then go back into their right hand pocket for the infrastructure costs that they were supposed to pay,” Costin said.

Costin claimed such a setup might funnel $220 million worth of property tax revenue to the Bears over a ten-year period. He also warned about the impact that this kind of property tax diversion could have on local school districts and other public goods that run on taxpayer money.

When Taylor took the podium, he told the audience he agreed with Costin’s point of view and would not make a financial argument for why public money should help fund the redevelopment at Arlington Park. Instead, he suggested that audience members consider that public money helps fund a range of cultural attractions, particularly the arts.

“Arlington Heights, [according to] publicly available numbers, spends a little more than $200,000 each year for its Metropolis Performing Arts Center,” Taylor said. “That facility draws approximately 50,000 attendees per year, that amounts to a subsidy of about $4 per attendee.”

Taylor said that based on projected attendance levels at a potential Bears stadium, the subsidy per Bears fan would actually be lower — about $3 per attendee.

“If you’re not going to oppose those other subsidies, I think you need to come up with a good reason why you would be opposed to subsidizing the Bears,” Taylor said.

Americans for Prosperity Illinois has kept up the pressure on the village to not offer the Bears public money for the stadium and surrounding development over protests from village leaders that the group’s proposal would kneecap Arlington Heights’ ability to bring businesses to the village.

They have circulated a petition, which Costin first submitted last month, that would bar the village from extending any kind of financial assistance to any corporation seeking to open there.

The petition has gotten signatures from at least 1% of the registered voting population of the village, allowing Americans for Prosperity to submit it to the Village Board for consideration as an ordinance.

If the village rejects the ordinance and Americans for Prosperity gathers signatures representing 12% of the voting population, then the proposal would appear on the ballot at the next village election as a referendum.

The group also released a poll that said 72% of respondents supported the Bears’ move to the village but that 68% opposed the use of public money to bring them to Arlington Heights.

Hayes has hit back at the group, calling them outsiders who are using the village to advance a political agenda and questioning the slant of the questions in the poll that found opposition to the use of public money for Bears-related development.

The Village has taken some few preliminary steps regarding the redevelopment, including hiring two consultants for economic impact and traffic analysis at the site. Earlier this month, village leaders hosted a Committee of the Whole meeting for residents to air concerns about the redevelopment and discuss the team’s presentation.