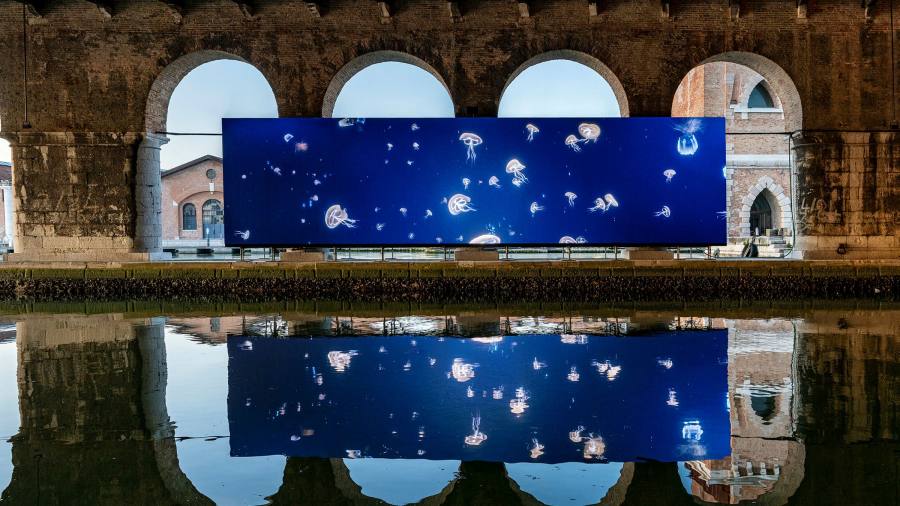 Perched on a reflective gold stool, beneath psychedelic tessellated wallpaper, surrounded by films of black women singing jazz, folk music and blues-infused a cappella, I am chilling in the British pavilion at the head of the main Giardini avenue in the Venice Biennale — a location declaring the imperial order circa 1900, when Britain led the world.

Sonia Boyce’s “Feeling Her Way” is the most joyful, vibrant British pavilion this century. It’s about collaboration and play, “how to listen, how to watch things unfold with other people”, she says. After years of lacklustre shows here, Boyce’s warm, generous call-and-response harmonies ring out. The pavilion feels reborn through the eyes, ears and spirit of the first black woman to represent Britain.

On either side, France and Germany twist nationalist inflection as inventively and playfully. France has Zineb Sedira’s stunning immersive recreation of Algerian immigrant experience, and in Germany’s pavilion Maria Eichhorn imposes ghostly silence — empty rooms, walls stripped to brick, floor slashed to lay bare foundations — in a meditation on the Nazi heritage of this 1930s building. (My pick of the pavilions, from France to South Korea, is at the foot of this story.)

What else to do? This biennale is fun, but it is also a moment when history sharply meets the political present. The main avenue’s most beautiful pavilion, Russia’s pale green arches and turrets, is closed — the artists resigned following the invasion of Ukraine. Opposite, the Nordic pavilion, transformed into the “Sámi Pavilion” and filled with reindeer skulls, is a protest by a remote community, tying postcolonialism to green politics — a global message.

The faux-classical American pavilion, modelled on slave-owner President Thomas Jefferson’s grand house, is briefly unrecognisable — draped in thatch with wooden columns to suggest a 1930s west African home. In “Sovereignty”, Simone Leigh’s totemic bronzes of black women tower, repossess the space, or discomfort us, as in the bent figure washing clothes, based on a vintage photograph: “a very racist image”, the artist says.

Like Boyce, Leigh is the first black woman to represent her country. Speaking to and for acute tensions in US society, she also reigns beyond — her “Brick House”, a bust of a black woman with braids and a skirt fashioned as a clay house, guards the Arsenale entrance: majestic, confrontational, defiantly unsubtle, heavy as the burden of colonial history.

Venice is inevitably a frame for battles of voice, visibility and identity, and who is not here is as potent as who is. Ghana’s pavilion is a building site, not ready in time — a reminder of many African countries’ difficulties in finding funds to stage a presence here. Most works for Kazakhstan’s show have been held up, en route at the Georgian border, by the war. The shuttered Czech and Slovak pavilion, signposted “under reconstruction” after roof damage, reads like a metaphor for eastern European uncertainty.

But the Ukraine pavilion is open, and elsewhere at the cavernous Scuola Grande del Misericordia, Ukrainian war work itself is miraculously on display: monumental portraits of individual soldiers — a few weeks ago a musician, an IT consultant, a chemist — as depicted from front-line photographs sent by one of them to his wife, painter Lesia Khomenko. Larger than life, sombre-hued, expressions a mix of determination and vulnerability, they bear witness. Their ordinariness is the point — they could be us.

This pandemic-delayed biennale’s hard-won existence has galvanised artists to new strengths, to hardly imaginable possibilities in times of crisis and to some immensely ambitious, engaging installations which are the triumph of director Cecilia Alemani’s central exhibition.

Within the Arsenale, Precious Okoyomon’s labyrinth of vines, water, rocks, snails, wild flowers is so seductive that huge red butterflies make it their home. Earth and textile sculptures of bulbous women preside over what Okoyomon calls a “politics of ecological revolt”, but the effect is benign, unifying: if the vines suggest the “entanglement of slavery”, the feel-good ecosystem symbolises hope for our entanglement with nature.

Outside the old shipyard, Wu Tsang’s “Of Whales” imagines, on an enormous screen, the ocean seen from beneath by the great mammal — speckled surfaces forming and reforming, shadows surging, diving, bursts of brilliant lights evaporating into powdery scintillations, reflected in the waters of the actual lagoon. Harps, horns, techno music from Asma Maroof and Daniel Pineda’s score echo through the vast arches. The film lasts six hours; you could stay swaying between light and darkness all day.

Or you could stroll on to the Arsenale’s walled Giardino delle Vergini, where Marianne Vitale’s burnt sculptures of model bridges, laments for lost connections and America’s industrial past, glint in spring sunshine like archaeological remains of a lost civilisation.

Alemani calls her presentation “The Milk of Dreams”, after a whimsical Leonora Carrington fairy tale, and in an absurdly gender-unbalanced show — 90 per cent women — she draws attention to surrealism’s legacy for contemporary art. Her deeper theme is transformation, new possibilities that challenge “the presumed universal ideal of the white, male ‘Man of Reason’ as fixed centre of the universe and measure of all things”.

The installations happily float free, and the most original sculptors and painters also seem beyond these prescriptions: Magdalene Odundo’s coiled, burnished black and ochre ceramic vessels; Regina Bracchi’s futurist figural sculptures in aluminium, hard-edged yet supple and delicate; Chiara Enzo’s tiny crystalline tempera paintings of flesh and body parts. And a few excellent male painters even manage to scrape through. 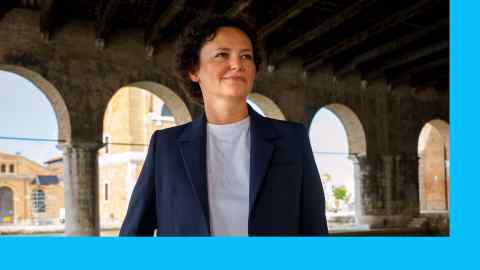 Unforgettable are the ethereal, mournful canvases in dripping, dilute pigments featuring black figures in eerie settings by Noah Davis, the leading painter of his generation when he died at 32 in 2015. Unforgivable is Alemani’s reduction of 91-year-old Ibrahim El-Salahi, whose large-scale figural paintings pioneer a fusion of modernism with Islamic ornament and Sudanese tradition, to cabinet-scale — drawings on the back of medicine packets.

Alemani’s concentration on historical surrealists (near half her show’s artists are dead) and their mostly meek, derivative descendants is pronounced at the Giardini. The gains are some tightly curated “time capsules”, but much outside is silly beyond parody — Sidsel Meineche Hansen’s earnest video of a brothel of sex-dolls sets the tone. There’s a stiffness, a curious lack of sensuality, for an exhibition supposedly celebrating female sensibility. Even the best of the omnipresent post-surreal fabric works, lifetime-achievement Golden Lion winner Cecilia Vicuña’s hanging thread-and-detritus pieces, balancing fragility and resilience, seem cerebral.

The Giardini only burst into feeling with the magnificent room devoted to Paula Rego. Centred on “Oratorio”, the triptych featuring abandoned babies and traumatised mothers, dramatising violence and intimacy in hard/soft pastel marks, this is painting aglow and shocking — and highlighting the academic character of much else here.

By choosing almost exclusively women, Alemani has paid a severe price in terms of quality, a cost obvious too in the contrast with many superb exhibitions by male artists across town.

And, unmissable, the name on everyone’s lips this week, the all-over installation of charred, light-pierced canvases, hung with bruised remnants — soldiers’ uniforms, refugees’ lost shoes — at Palazzo Ducale: the work that asserts painting as a continuingly inventive medium, and makes Anselm Kiefer the man of the moment in Venice 2022.

The happiest pavilion in town, with a deeply serious undertow. Sedira shows a film combining episodes from 1960s Algerian cinema with memories of her childhood as the daughter of Algerian immigrants in Paris. The real thrill is that you walk into reconstructions of the sets, from classic films and Sedira’s own home — a vintage cocktail bar so chic it makes you feel like a movie star, complete with tango dancers; a domestic interior intricate in the details of what immigrants preserve and add. Sedira celebrates the personal as political, and the fusion of influences that keeps culture alive and joyous.

The day Russia invaded, curator Maria Lanko drove west out of Kyiv with 78 bronze funnels loaded in her car. Now, thanks to hydraulic pumps fitted by a Milan company, Makov’s elegant, minimalist three-metre tiered pyramid, water rushing through the funnels at the top, then reduced to a trickle at the bottom, stands in the Arsenale. It is an image of immense weariness, of time running out, but the rhythm, the calming sound of the water and the grid-like formal beauty of the installation are timeless.

“Chroma V” is a 50-metre coil of cells — or fish scales? or snake skin? — whose curves and knots, changing brightness and colour, are generated by algorithm. “Argos — the Swollen Suns” is a tall, graceful arrangement of glass tubes that detects cosmic particles and sends signals to the other kinetic sculptures in this spectacular show. Kim imagines a universe in flux where “nameless materials, purposeless apparatuses, the micro-world and cosmic events are all entangled”.

It’s one visitor at a time here for this strange multisensory progress: through a reconstruction of empty factories, silent sewing machines, defunct extractors, to simulations of swarming fireflies, rushing waves, a musing on submerged civilisations and man and nature. The catalogue, opening with Inferno’s “in the mid-sea there sits a wasted land”, suggests a Dante-esque journey for the post-industrial age; it’s also a voyage through Italian 20th-century intellectual life (Pier Paolo Pasolini, Italo Calvino) — self-indulgent but captivating.

Guðjónsson’s material is metal dust, magnified by a camera on to a six-metre screen where it cascades like an eerie waterfall, drifting, pulsating in endlessly moving shapes, to a soundtrack (Valgeir Sigurðsson) using stacked electromagnetic sounds. Guðjónsson’s interests are abstract — light, perception, “the multisensory experience of materiality”, but this meditative piece about our place on the planet seems also shaped by his home landscapes of glaciers and torrents.