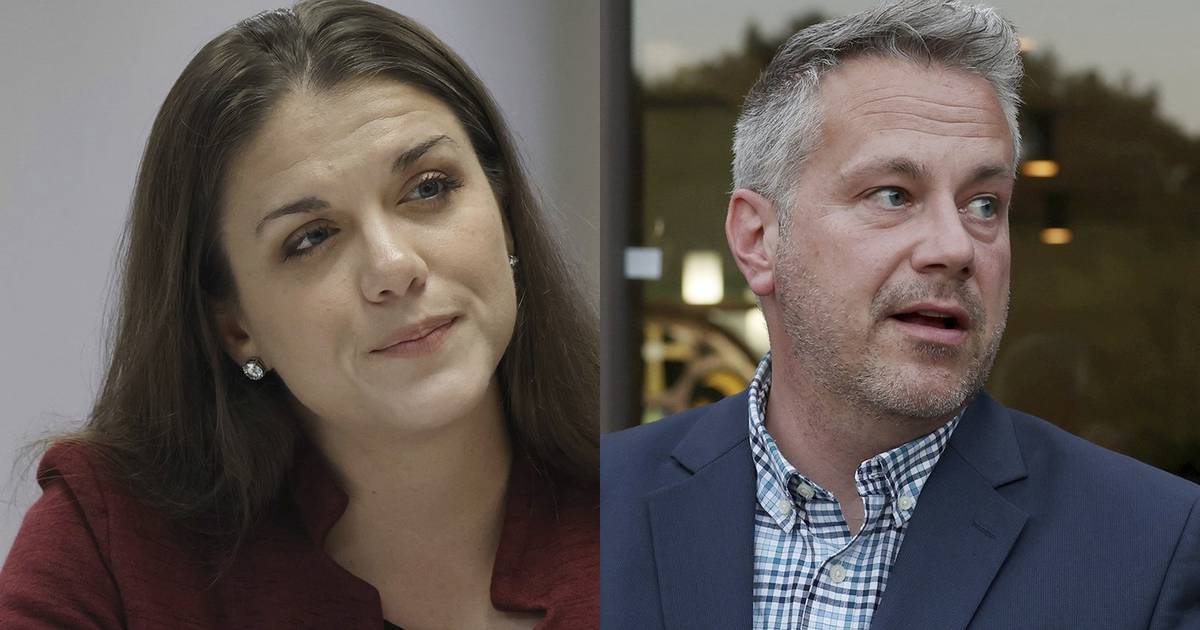 The front line of this year’s fierce fight for control of the U.S. House of Representatives cuts straight through the river cities and rural communities of the 17th Congressional District in northwestern Illinois.

But on the streets of Rockford and Rock Island, the face-off for the open seat between Democrat Eric Sorensen and Republican Esther Joy King is being met by voters with stony silence.

The low-key nature of the high-stakes contest playing out in their towns comes despite the fact that national politicians are paying close attention to the election, which is considered one of a handful of races that could go either way among the 435 House seats on the ballot in midterm elections across the country.

The outcome, where the congressional seat that is currently in Democratic hands could flip Republican, could also have an outsized impact on whether Republicans take control of the House or Democrats keep it.

King and Sorensen are both trying to hew to the political middle and play up their efforts to improve the economy in a moderate district home to lots of blue collar and agricultural workers. King has opened a big fundraising lead as the campaign enters the home stretch with the help of several high-profile national Republicans, though Sorensen says he will have plenty of money to connect with voters in the race’s final weeks.

Former Rockford Mayor Larry Morrissey said neither the campaign of former local TV meteorologist Sorensen nor that of lawyer and U.S. Army reservist King has so far seemed to captivate the city at the northeast edge of the district, which Springfield Democrats drew to favor their party in the once-per-decade redistricting following the 2020 U.S. census.

That might be because the western part of Rockford that’s in the district is reliably Democratic and Sorensen and King have so far opted to concentrate on convincing undecided voters elsewhere, Morrissey said.

“I don’t watch a lot of mainstream cable television, but I haven’t heard much out of either candidate,” Morrissey said while sipping an espresso with his wife, Stacy, outside a Rockford coffee shop last month. “Normally I’d be getting mailers by this time.”

[ Look at the boundaries for Illinois’ 17 congressional districts ]

With summer over and a little more than a month until Election Day, the campaign is kicking into high gear. So there’s still time for the candidates to get their messages out over voters’ televisions and through their mailboxes in the district that juts west from Rockford to the Mississippi River and swings south and then east, through the Quad Cities before grabbing Peoria and Bloomington.

But Stacy Morrissey said she’s not optimistic right now that either candidate will be able to draw voters.

Still, King said she’s confident her name recognition and her focus on the impact that inflation is having on residents’ wallets will carry her to a win this November as she continues reaching out to people.

“Talking to voters, nine times out of 10 they’re saying ‘Esther, I can’t fill my gas tank right now without feeling the pain,’ ” she said.

In addition to residents blaming President Joe Biden’s administration for inflation, they also have plenty of anger toward Democratic Gov. J.B. Pritzker for COVID-19 policies that hurt the local economy by forcing businesses to close while those in nearby Iowa thrived, she said.

“Out here in our part of the state, especially in the Quad Cities, we can literally see across the river to a state that was free during the lockdowns,” King said. “Business owners on this side of the river had to shut down and lost everything when we could see what it looked like to be able to operate a normal community. And so it is an extra level of angst here in our part of the state.”

King, 36, has been running more or less since before the 2020 election, when she narrowly lost to incumbent Democratic congresswoman Cheri Bustos, who then announced she would not run for a sixth term.

King’s not interested in questioning the legitimacy of the 2020 presidential election, despite many Republicans insisting without evidence that Donald Trump actually defeated Joe Biden but had the election stolen. Biden beat Trump in the new 17th District, 52.7% to 44.9%, according to a Daily Kos analysis, though Trump won in the old 17th District despite Bustos’ victory, 49.7% to 48.1% over Biden before the redistricting.

“The election system worked the way it was supposed to work” in 2020, King said, though she said she wants to work toward “a more transparent system that really prioritizes election integrity” so people have confidence in election results moving forward.

But Sorensen, 46, also has name recognition as he leans hard into his own connection to voters. A Rockford native, he worked as a TV meteorologist in both Rockford and the Quad Cities.

Speaking recently at a Rockford event hosted by a voters’ group supporting abortion rights, Sorensen argued his TV weather background sets him up well to represent the area in Congress.

“Now I’m running for Congress. Why?” he asked during remarks to the group. “Because we need someone that’s going to fight for us, but someone that’s also going to tell the truth. And that’s what I did as the meteorologist.

“I’m not saying that I got the weather right every day. Certainly not. But nearly my entire life has been spent right here in this district. And because I’ve been a part of the community here, I understand what our values are, and why we live here. Even if our way of life doesn’t make sense to those that are in Chicago or in Washington, D.C., it makes sense to us.”

Sorensen is gay, and he told the abortion rights group that the U.S. Supreme Court’s June decision overturning Roe v. Wade could trigger a slippery slope for other liberties, such as same-sex marriage.

Sorensen also stresses the need to fight climate change, harking back to his time on the air to make the case that his science background makes him the “climate communicator” needed in Congress.

It remains to be seen whether Sorensen’s more progressive positions are a hit with the moderate voters in much of the district. He also hastens to make the case he will do a better job than his opponent to fight for constituents struggling to make ends meet.

“I’m focusing more on jobs, those are the things we need to make sure we’re focused on, not climate and not LGBTQ issues,” he said. “It’s making sure that we’re talking about the issues that are on the kitchen table today.”

Likewise, King is trying not to come off as too conservative.

King said she’s opposed to abortion and she’s glad the Supreme Court returned the decision on abortion rules to the states, “especially here in Illinois, where our extreme laws are out of touch with over 80% of Americans.”

But she said she doesn’t think the recent proposal by Republican U.S. Sen. Lindsey Graham of South Carolina to limit abortion rights nationally will go anywhere.

“I don’t think too many people are paying attention to Lindsey Graham, especially here in our area,” King said.

Perhaps reflecting her longer campaign runway and the fact she had a relatively easy time beating one other Republican in the June primary while Sorensen came through with less than 40% of the vote against five other Democrats in an expensive, hard-fought primary, King had a big money advantage heading into the general election campaign.

She boasted $1.8 million on hand at the end of June, according to the Federal Election Commission, with contributions from political action committees connected to national Republican figures such as Trump administration ambassador to the United Nations Nikki Haley, House Minority Leader Rep. Kevin McCarthy and Texas congressman Dan Crenshaw

Sorensen had $114,509 on hand at the end of June, according to the FEC. He got money from the likes of Bustos and House Speaker Nancy Pelosi’s PAC, as well as from a committee that aims to help elect scientists and one that supports progressive candidates from underrepresented communities.

Democrats currently hold 220 House seats to 212 for Republicans with three vacancies. Midterm elections most often favor the party out of power, so with Democrats holding the presidency and both houses of Congress, the Republicans expect to make gains.

The Supreme Court’s June ruling overturning Roe v. Wade has energized Democrats who oppose that decision, however, offering Democrats some hope their candidates will perform well this November.

And state-level partisan gerrymandering of House district boundaries following the 2020 census has given one party or the other a strong advantage in most of them.

Sorensen said he’s confident the importance of the election nationally and locally will drive voter interest and get them to the polls.

“We all know that Illinois-17 is, quite honestly, where our democracy hangs,” he said. “It’s right here in Illinois. … As we get closer to Election Day, and as we’re talking to more voters and these voters are realizing what’s at stake, they will vote. They’re going to be passionate.”