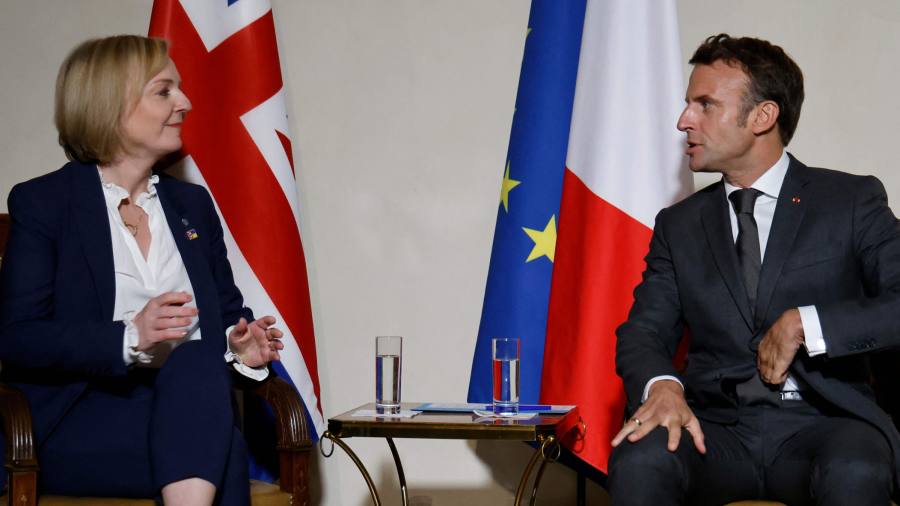 The UK is poised to sign a deal with an EU energy partnership it left after Brexit, in the first concrete result of warming ties between Brussels and London.

The voluntary North Seas Energy Cooperation (NSEC), which focuses on supporting the construction of wind farms and distribution networks in the region, is made up of the European Commission, eight member states and Norway.

Since leaving the EU in 2020, the UK has shown little enthusiasm for formal collaboration with Brussels. However, the need to find alternatives to Russian gas because of the war in Ukraine has led to a change of heart.

The UK is preparing to sign a memorandum of understanding with the NSEC, in effect rejoining. It cannot be a formal member, however, unless it signs up to internal market rules.

Liz Truss, the British prime minister, spoke to leaders of neighbouring countries about energy security at the inaugural meeting in Prague of a new grouping of European states, the European Political Community.

She had lunch with host Petr Fiala, the prime minister of the Czech Republic, holder of the rotating EU presidency.

Fiala said: “Our presidency aims to complete the process enabling the UK to join the North Seas Energy Cooperation as soon as possible. This step will strengthen European energy co-operation and security in the face of Russian aggression and energy price manipulation.”

Truss also had bilateral meetings with French president Emmanuel Macron and Dutch premier Mark Rutte on the margins of the summit. Both France and the Netherlands are NSEC members.

Rutte later told reporters that he supported closer energy ties with the UK. The Netherlands and Belgium supply electricity through interconnectors to the UK in the winter, when there is generally a shortfall.

“We discussed exactly . . . how to work together as North Sea countries on issues like hydrogen, issues like wind energy, but also on gas and the connections between countries like the Netherlands, Britain, but also Germany, Belgium, France. So this was an excellent discussion.”

The nine NSEC countries have agreed to increase the capacity of offshore wind energy to at least 260 gigawatts by 2050.

Belgian prime minister Alexander de Croo joked to reporters that his country had “kept the lights on in London three months ago” when there had been an electricity shortage. He said he supported more joint infrastructure in the region and more interconnectors.

Truss had spoken to the leaders of 44 countries attending the meeting and urged them to keep supplying power to the UK through their interconnectors. The UK has been chosen to host the planned fourth meeting of the EPC group in 2024.

The UK prime minister released a joint statement with Macron saying that they would hold a Franco-British summit in 2023, the first since Brexit, “to take forward a renewed bilateral agenda”.

They further agreed to deepen co-operation on illegal migration within the bounds of international law, to tackle criminal groups trafficking people across Europe ending in dangerous journeys across the Channel. Interior ministers are due to conclude a package of measures on the issue this autumn.

Asked about an earlier comment when she questioned whether Macron was a “friend or foe”, she told reporters: “He is a friend.”

“We’re both very clear: the foe is Vladimir Putin.”

Macron said he hoped the move on NSEC marked a “new phase of our common relations”. “Having the UK being engaged in a lot of common initiatives makes sense, because we share the same continent. We have a lot of challenges in common,” he said.

“Our willingness is clearly to work together for the unity of our continent.”

Talks over how to resolve the post-Brexit trading relationship — that had soured relations and led the EU to exclude the UK from its Horizon research programme — have resumed, raising hopes of a deal.