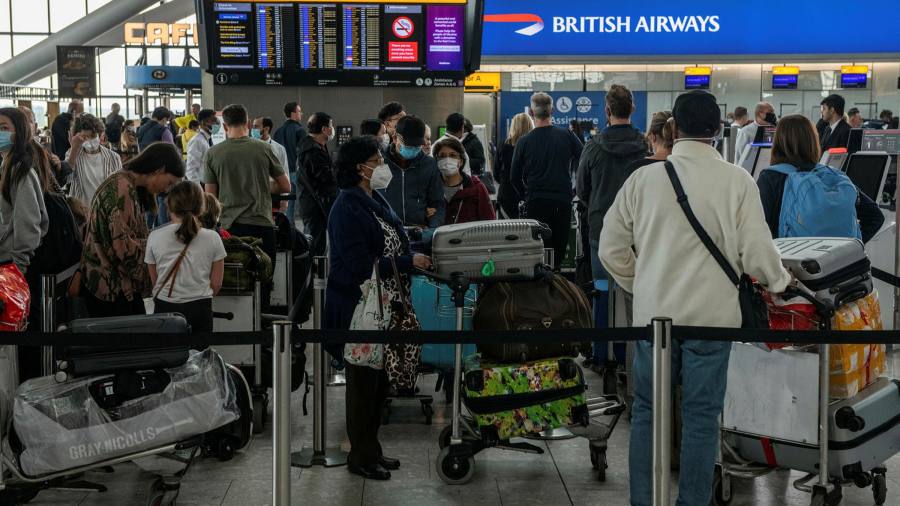 The UK is proposing measures to help speed up the recruitment of workers at airlines and airports in an effort to ease staff shortages that have led to hundreds of cancelled flights and big queues.

Aviation minister Robert Courts has written to aviation industry executives, saying the government would, by the end of April, aim to drop a requirement that companies must have completed background checks on new hires’ past employment before they begin training courses.

The move comes as the sector struggles to cope with Britons seeking to go abroad after the lifting of coronavirus restrictions because companies slashed workforces when travel ground to a halt at the start of the Covid-19 pandemic.

UK airlines have cancelled as many as 1,000 flights a week recently because of staff shortages caused by a combination of Covid-19 infections and longer-than-expected times completing background and identity checks on new starters, and obtaining security clearance for them. Travellers using airports including Heathrow, Gatwick and Manchester have experienced lengthy delays.

“All of us will be concerned about the situations some passengers have experienced over the past couple of weeks,” said Courts in his letter to industry executives on April 8.

“The Department for Transport has been working hard to identify solutions to help ease the current difficulties that you are facing in what is a competitive labour market.” Courts’ letter was first reported on by the Sunday Telegraph.

Since the UK retained EU laws on background checks after Brexit, ministers are now proposing legislation known as a statutory instrument to loosen the requirements.

Courts said in his letter: The [statutory instrument] provides the possibility of greater flexibility on the need to have gone through industry managed identity and background checks before training can begin . . .

“I want to stress that while we are acutely conscious of the need to get more staff into your operations, we have to balance this against the risk of insider threat and other security factors. This will always be our primary focus.” He stressed the statutory instrument had to be approved by parliament.

Transport secretary Grant Shapps insisted last week he was “very concerned” about getting airlines and airports back to full strength quickly after they fired tens of thousands of staff during the pandemic.

“We had been warning them that for a long time they would need to gear up again,” he said, in remarks some industry executives interpreted as criticising the sector.

While new hires could undergo training courses without the background checks having been completed under the proposed changes outlined by Courts, they would still need full security clearance before starting work.

Background checks are distinct from security vetting and both form part of a wider series of verifications that aviation staff must go through, which usually take up to 15 weeks.

Johan Lundgren, chief executive of easyJet, said recently there was a three-week delay on vetting and the low-cost carrier would have had fewer flight cancellations if some of the 100 staff awaiting clearance had been processed sooner.

A government spokesperson said: “Using our post-Brexit freedoms, we are looking at ways to help industry speed up job reference checks.

“However, we will not allow people to work in the sector when they have not been subject to the appropriate enquiries.”