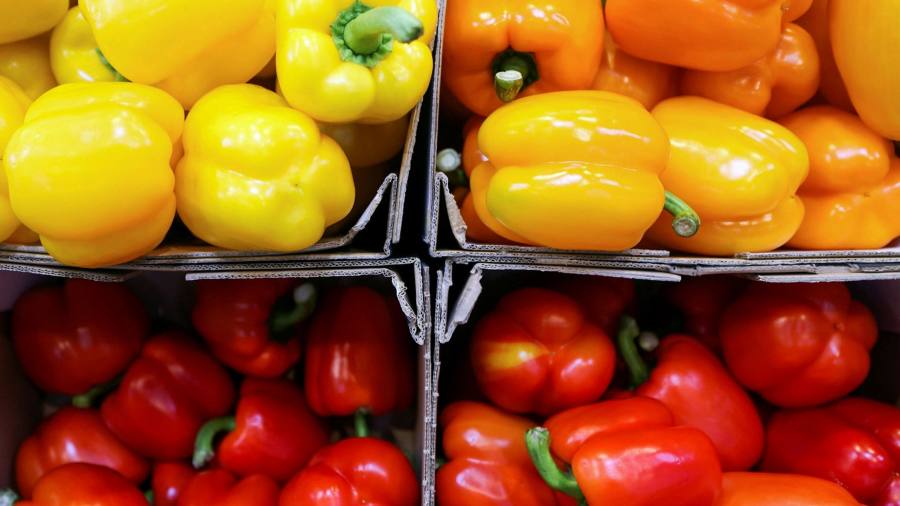 The UK will harvest less than half of its normal quantity of cucumbers and sweet peppers this year after many glasshouse growers opted not to plant them in the face of surging energy costs and labour shortages, according to the trade group for the main growing region.

Lee Stiles, secretary of the Hertfordshire-based Lea Valley Growers Association, which represents businesses that grow three-quarters of the country’s cucumbers and sweet peppers, said about half of the glasshouses were empty this year.

The remainder would yield less than usual because of growers cutting down on heating to save costs, he said.

It is now too late to plant further crops, meaning the UK will not make up the lost volumes this year, Stiles added, predicting a 50 to 60 per cent drop in yields for cucumbers and sweet peppers nationally in 2022.

“The gas price is still quite volatile and trying to get staff this time of year is nearly impossible, so it’s not worth planting, firstly because of the gas [prices] and secondly there is no guarantee they’re going to get the labour,” he said.

At the start of 2021 growers were being charged 40p per therm for their natural gas, but prices have since surged as high as £8 in some cases as Russia’s invasion of Ukraine worsened market pressures, he said, adding that aubergine and tomato yields will also be affected.

Jack Ward, chief executive of the British Growers Association, said while glasshouse growers were worst hit, labour and cost pressures had resulted in a roughly 20 per cent cut in planting of brassicas such as broccoli and cauliflowers.

“The net result of all of this is that we have just shrunk our productive capacity,” Ward said.

Until this year the UK was about 20 per cent self-sufficient in cucumbers and peppers, down from 100 per cent in the Victorian era when commercial salad glasshouses were first constructed, said Stiles.

UK production mainly takes place in summer, while the country also imports from Spain, Morocco and the Netherlands, especially in winter. These imports are less fresh on arrival because of days spent in transit, while surging energy costs in the Netherlands have also reduced yields.

“There will certainly be a shortage of British-grown produce but whether they can make that up with imports I’m not sure,” Stiles said.

Growers have used savings to tide them over this year, but there is a risk of long-term shrinkage in the salads sector, which unlike other types of farming does not receive government subsidies, Stiles said.

Growers who have pushed ahead with this year’s crop risk making a loss. “They’ve managed to come to some kind of arrangements with their supermarket customers based on the cost of production but the problem is that the input costs keep rising,” he said.

The Lea Valley’s 400 acres of glasshouses grow about 80mn cucumbers and 100mn sweet peppers in a typical year, about three-quarters of the UK crop of each, the group said.

Labour shortages in harvesting have worsened since Brexit ended free movement from Europe; farmers and growers have called for an annual allocation of 30,000 visas under a seasonal workers’ scheme to be expanded.

A majority of last year’s seasonal workers came from Ukraine and the war has prevented many expected workers from arriving this year.

The Department for Environment, Food & Rural Affairs said: “It’s crucial we do everything we can to support the farming sector. That’s why we have announced measures to support growers with the availability of fertiliser.”

It added that the government had also given “greater certainty in accessing seasonal migrant labour” by extending the seasonal workers’ visa scheme to the end of 2024.