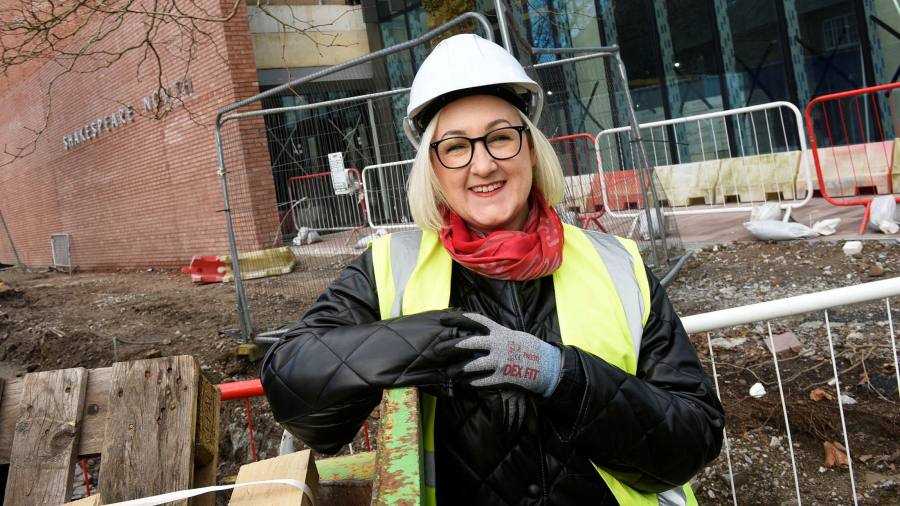 In a small market town in northern England, a little bit of history is about to be both made and echoed.

A few weeks from now, a new arts venue called the Shakespeare North Playhouse will open in Prescot, near Liverpool, inspired not only by William Shakespeare’s connections to the area but also by an Elizabethan playhouse that was once located close by.

Those behind the Shakespeare North Playhouse have high hopes the theatre — which will have a similar timber interior to Shakespeare’s Globe in London — will prove a major attraction for Britons as well as tourists from as far away as North America and Asia.

Even before the venue’s opening on July 15, it is having a positive economic impact: in a trend dubbed the “Shakespeare effect”, there has been a proliferation of pubs and restaurants, as businesses look to capitalise on Prescot’s pursuit of regeneration through culture.

The town is part of the Merseyside borough of Knowsley, one of the most deprived areas of England, but the Labour-controlled local council is striving to improve life for its residents.

Knowsley has contributed funding for the £30mn Shakespeare North Playhouse alongside central government, and Melanie Lewis, chief executive of the venue, said the council deserved “an immense amount of credit for having the vision of putting culture at the centre of the town, of regeneration through culture”.

The idea for Prescot’s arts venue dates back to the early 2000s. Architect Nicholas Helm and academic Richard Wilson were influenced by Prescot’s original playhouse of 400 years ago, which hosted Shakespearean performances by Lord Strange’s Men, a troupe of players supported by the Earl of Derby, resident of nearby Knowsley Hall and also a patron of the playwright.

Prescot has been struggling in recent decades with the decline of industries including mining and toolmaking. Yet as momentum swung behind the plans for the Shakespeare North Playhouse, businesses started to move into the town.

Gary Usher, a chef with a string of crowdfunded bistros across the north west, admitted he took a gamble on Prescot. In 2018 he opened his restaurant Pinion in a former betting shop in the town centre, and a television documentary called The Rebel Chef followed its ups and downs, as locals described their area as “tired”.

Usher is now looking forward to the launch of the Shakespeare North Playhouse. “The energy around the theatre is massive,” he said. “It feels like people are counting on it as the saviour of the area. I feel like that — we’re waiting for it.”

Usher is not the only chef taking a punt on Prescot. Harry Marquart, a Liverpool restaurateur, looked around the town with his business partners four years ago.

The new theatre was a “massive factor” in their decision to open the Shakespeare-inspired The Lord Strange pub in 2019, he said.

“The more you read about the history of Prescot, the more interesting it becomes,” added Marquart. “I didn’t know much about the theatre at the time and the more I read about it, the grandeur of it really stood out.”

Knowsley council has put more than £12mn into the Shakespeare North Playhouse, alongside funding from Liverpool City Region, the authority that brings together six local councils, and national arts bodies. Knowsley has estimated the venue will attract more than 100,000 visitors from across the UK and overseas each year, and boost the local economy by £5mn annually.

“There certainly has been a ‘Shakespeare effect’ in Prescot,” said Tony Brennan, the council’s cabinet member for regeneration and economic development.

“Before construction of the Shakespeare North Playhouse had started, new restaurants and bars opened in the town in anticipation of the new visitors that would be heading to the theatre. That had a really positive ripple effect.”

Prescot has had a poor pandemic by national standards, according to Financial Times analysis of consumer spending data. The latest figures, for April, show in-person spending just 10 per cent above where it was three years earlier.

But Nicola Harrington, of Manchester-based real estate agency Sixteen, said she has been “inundated” with inquiries about commercial property lets in Prescot in recent months — with “a lot of little independent businesses wanting to rent”.

“The Shakespeare theatre will be a real catalyst . . . It seems to me like it’s a town on the up, which is positive, because you hear so much doom and gloom,” she added.

The Shakespeare North Playhouse opens with a weekend of free celebrations, and visitors will be able to tour its 470-seat auditorium, which is based on the 1629 cockpit-in-court theatre in London.

Lewis said it was “critical” the new venue was as much about the “hyper local”, appealing to people in Prescot, as well as the international audience it also hopes to attract.