UIC graduate workers haven’t had a contract since August. The school year is two weeks away from ending, so they began striking. – Chicago Tribune 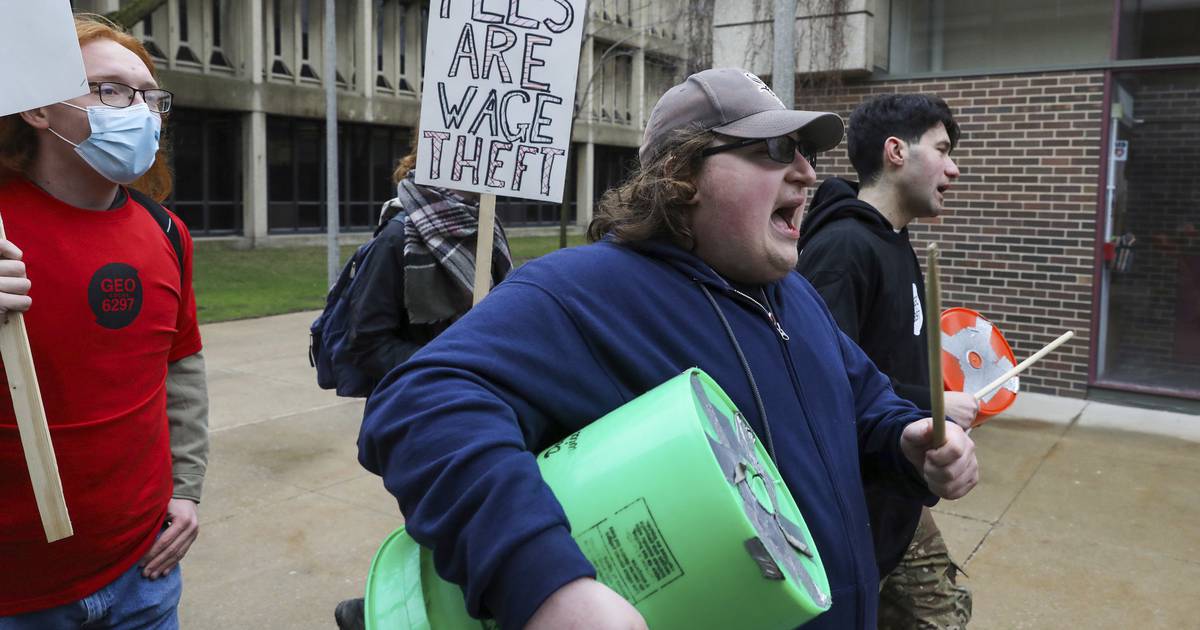 Students at the University of Illinois at Chicago are only two weeks away from finishing the semester, but now graduate student workers and teaching assistants are not holding office hours or helping professors after they went on strike Monday.

On Wednesday, more than 50 graduate and undergraduate students organized a rally with leaders from other Chicago-area labor unions to show support and help form protest pickets around the UIC campus.

The Graduate Employees Organization has been bargaining with the university for more than a year over a contract for the 2021-22 school year. The organization is seeking a raise in wages, reduction of student fees that workers are charged, better health care, adding no-lockout language to the contracts and trying to overhaul their nondiscrimination and harassment policy. The university and the union have yet to reach an agreement. The graduate student workers have been working without a contract since August 2021.

GEO members held a strike vote after a semester and a half without a contract, and earlier this month the union announced that 97% of its 1,500 members voted in favor of a strike, said Adam Pratt, 26, co-president of GEO who is a Ph.D. student and teaching assistant in the mathematics department.

UIC posted a statement on its website saying normal operations would continue during the work stoppage. In some cases, this might mean more work for faculty and students.

“I know my boss is really worried about getting grades submitted and that’s something that just cannot happen right now with the strike,” Pratt said, referring to the professor of the class he is assisting. There are 150 students in the class, so if the strike continues, the professor will have to grade all the final exams without help. “We’re all just gonna have to hope that the university starts making improvements and we can move together towards a fair contract and the strike can be over.”

Pratt said other classes in his department, like Calculus I, have around 1,000 students and five professors. Without the T.A.s in those courses, the five professors will be left to grade all of the final exams, again without help from assistants.

“We started with raises equal to Loyola University (around a 30% raise), but we’ve come significantly down since then to a 21% raise,” Pratt said. “We wanted to cut all of our fees and have them reimburse because the fees are a way of basically doing wage theft to our graduate workers.”

These fees, paid by all students, account for around 10% of the workers’ $20,615 minimum salary for the nine months of the school year. “We also wanted to decrease the cost of health care both for graduate workers and their dependents and the university wants to increase the cost even for the same coverage, which is not particularly good coverage,” Pratt added.

Lidia Aguilar, 36, was one of the students singing chants in the picket line at the UIC Science and Engineering Labs. She is a doctorate candidate in the Hispanic studies department and a T.A. for the Spanish for bilinguals undergraduate course.

“I don’t want to be here, I want to be with my students; it’s our last two weeks together,” said Aguilar, who is an international student from Spain. “This lack of raise has affected my ability to pay my (university) fees, the ability to see my family once a year because it’s $1,000 to go to my hometown in the south of Spain, so I spent a whole year saving so I can spend Christmas with them and I haven’t been on a summer break in my country for eight years.”

“Also something very important about international students is that we cannot work outside of campus,” Aguilar said. “I cannot be a barista at Starbucks, a T.A. is the only option that I have a job while I am a student in this country because of my visa status, and it’s not enough. … My landlord raised my rent by $100 and I cannot afford to stay in my apartment, so it’s really hard not (to) know what the future contract brings to my paycheck.”

Meg Rock, 35, a doctoral student in the College of Education and an assistant, also sees the strike as the only way to get fair treatment.

“I’m here because I want to be a teacher,” Rock said. “I’m not here because I like sitting outside in the cold. I want to be supporting my students, but it doesn’t feel good to know how much my fellow workers are hurting. There have been many times where I’ve been on bargaining sessions on Zoom and I have to turn off my camera so that I can cry because of the experiences of harassment or difficulty of fellow workers are so painful.”

In a statement released by UIC hours after the rally on Wednesday, officials said they wish to reach an agreement soon. “With 21 of 27 issues agreed upon in our good-faith negotiations to date and sessions scheduled for today and tomorrow, April 20 and 21, we believe much can be resolved through continued dialogue at the bargaining table.”

“U of I was able to provide the president of their system a 40% pay increase (in 2020). Enough is enough,” said John Miller, president of University Professionals of Illinois Local 4100. “The university has to get its priorities right. … It is not a time to prioritize administration and management, it is time to prioritize the students and the people who do all the work, including all of the graduate employees.”

Susan Hurley, executive director of Chicago Jobs With Justice, said there is an issue with the University of Illinois system. “There is no reason why the boss of a public institution being paid with tax dollars should be making over $600,000 a year,” she said. “The value of the education that is provided here is the fruit of your labor and I think you deserve to be compensated fairly for that. This university wouldn’t function without all of you.”

In a coffee shop in the UIC area, two undergraduate seniors, Maahi Shah and Yesha Prajapati, were talking about the recent protests on campus.

“I think it is a little bit stressful for some students because they don’t know how their next few weeks of academics might be affected,” Shah, 22, said. “But at the same time, I think it’s pretty understandable because the T.A.s have to use that pressure point to be able to get the university to make some compromises and be able to discuss something urgently.”

Prajapati, 21, remembered there was a similar strike by GEO during her first year, in 2019, and thinks not a lot of progress has been made. “I feel like it’s really repetitive and I feel like UIC should be providing T.A.s with what they need instead of just repeating the cycle.”

No more Instagram filters? Here’s what to know about Meta’s move to pull AR features in Illinois. – Chicago Tribune