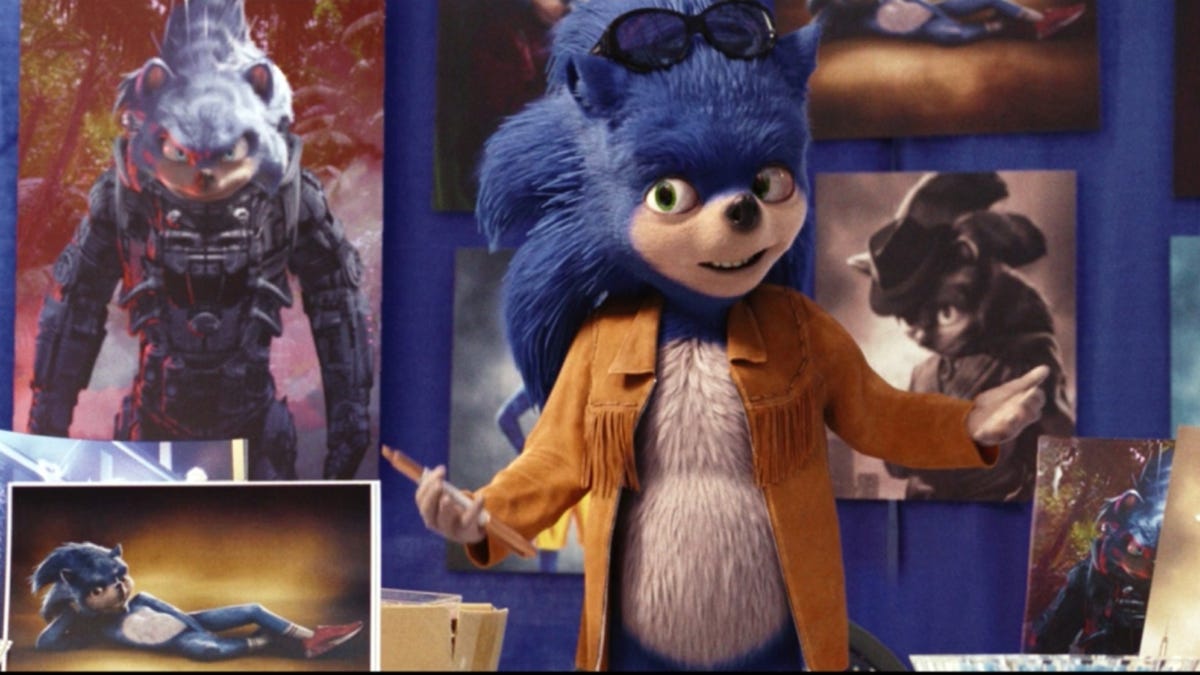 Do you remember “Ugly Sonic,” the internet’s colloquial name for Paramount Pictures’ “realistic” take on Sega’s Blue Blur that featured weird human teeth? It was the original design for 2020’s Sonic the Hedgehog live-action adaptation, a design that was quickly scrapped because fans dragged this humanized Sonic to hell and back. While we got a much better design once the film hit theatres, Ugly Sonic has now reemerged in a different movie starring those cunning and mischievous Disney chipmunks, Chip and Dale.

That’s right, Ugly Sonic makes an appearance in Chip ‘n Dale: Rescue Rangers, a live-action and computer-animated action-adventure comedy starring John Mulaney and Andy Samberg as the furry duo that’s now available on Disney+. A la Who Framed Roger Rabbit, the film is packed with cameos by many a famous animated character. But none of those cameos has taken people by surprise quite as much as Ugly Sonic.

Ugly Sonic is something of a legend on the internet. Having sparked such a massive backlash that it prompted Sucker Punch artist Edward Pun to “fix” Paramount Pictures’ atrocious design, Sonic the Hedgehog director Jeff Fowler delayed the film a few months to actually take the mascot back to the drawing board. What we got was much more consistent with Sonic’s existing design and way less human-like (and without those horrifying teeth), going on to become one of the better parts of the mostly-fine film action-comedy. But Ugly Sonic lives on, so be warned: Some minor spoilers for Rescue Rangers are below.

Ugly Sonic appears at some comic convention in the film, where he mans his own guest booth and sells merch like signed photos of himself (lol). He makes references to the backlash, saying those at the convention will “like me for who I am, not like last time when the internet got one look at my human teeth and burned the place down.” Ugly Sonic even purports to have gotten a job on a reality TV show called “Ugly Sonic, Uglier Crimes” in which he’s the FBI’s ride-along buddy. Sigh, Ugly Sonic would be a cop.

I couldn’t just believe the rumors though. This horrifying spectacle was something I had to see for myself. So, I booted up Disney+, checked the “New Releases” section for Rescue Rangers, and fast-forwarded to the cameo that had people reeling in shock and disbelief. Not only is it true, but my God, he’s got a…dad bod.

After signing something for some teenagers, who walk away chuckling, Sonic remarks with a tinge of levity that he’s all too familiar with the jokes.

“Oh, they’re laughing at me. I know that,” Ugly Sonic, voiced by comedian Tim Robinson, says. “You can’t hurt my feelings if I’m in on the joke.”

Well, those jokes are likely to never end now that Ugly Sonic has not only been immortalized in memes across the internet but also in a Disney film.

I gotta admit, I do feel bad for Ugly Sonic, though. I mean, he—and his dad bod—were rejected in favor of the newer design seen in Sonic the Hedgehog 2 and presumably the in-production third film and live-action TV series, as well. But who knows, maybe Rescue Rangers will launch Ugly Sonic’s career, and he’ll end up getting his own movie after all?

As far as Sonic’s games go, Sega’s remastering the first four series games for the compilation pack Sonic Origins, which is cool. What’s not cool, though, is Sega’s also removing all four standalone games from digital stores ahead of Origins’ June 23 release. So while you can get them for $40 in the Sonic Origins bundle, pretty soon you won’t be able to buy Sonic the Hedgehog, Sonic 2, Sonic 3 (& Knuckles), and Sonic CD individually. What a bummer.