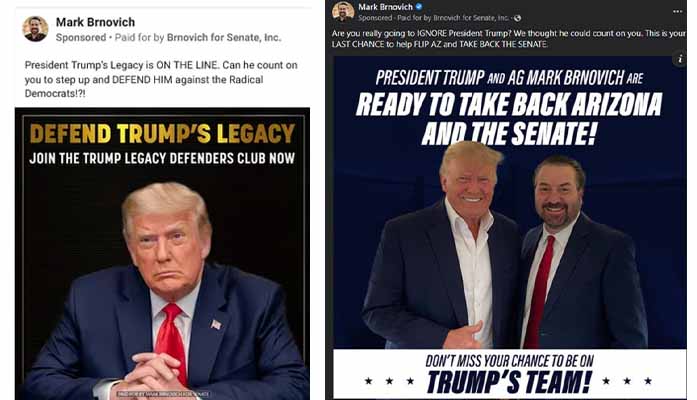 The ads, paid for by Brnovich’s official campaign committee, are the subject of a recent cease-and-desist notice from the attorney of Save America, Trump’s political action committee, warning that legal action could be forthcoming if Brnovich does not stop using Trump’s name and image in a manner suggesting the former president supports Trump’s campaign.
“Your use of President Trump’s name, image, and/or likeness is likely to deceive individuals into believing President Trump supports, endorses, or otherwise promotes your candidacy for U.S. Senate in Arizona – he does not,” the attorney wrote.
One such use of Trump’s name and image involves a campaign ad which reads “President Trump and AG Mark Brnovich are ready to take back Arizona and the Senate.”

Below the text is a photo of the two men taken back in happier days before Trump became highly critical of Brnovich and announced an endorsement for Blake Masters, considered by many as the frontrunner in the upcoming Republican primary.

Brnovich has not posted any comment about the cease-and-desist notice, choosing instead focusing his recent tweets on the border, inflation, and election laws. But Masters had something to say about it Tuesday.

“As Attorney General, Mark Brnovich was supposed to *protect* Arizonans against fraud — turns out, he’s been misleading voters and scamming donors by implying that he has President Trump’s support. Yikes,” Master tweeted.

A Trump spokesman has said it is not surprising that candidates across the country want to be tied to the former president, even if they do not have his endorsement.

“In Republican politics, President Trump’s endorsement wins races at an unprecedented rate and nearly every dollar being raised and every vote being earned is thanks to the movement and brand he created,” spokesman Taylor Budowich said.

Understanding the legal consequences of a cease-and-desist notice is easy for Brnovich, whose office frequently issues such missives against individuals, companies, and organizations engaged in false, misleading, or deceptive advertising.

Last fall, the attorney general / senatorial candidate promoted the “Trump Legacy Defenders Club” via social media along with a large photo of Trump. No such club actually existed, as those who bothered to look closer at the Facebook posting discovered.

Instead, it was a campaign ad for Brnovich, made obvious by the “Paid For By Mark Brnovich For Senate” notice at the bottom of the ad and the sponsor listing of Brnovich for Senate, Inc. on the Facebook ad.

Weeks later, Brnovich’s campaign used a photo of who appears to be Trump in yet another Facebook ad. It asked people whether their “Trump Membership is expiring” and called on supporters to “renew your 2022 membership before it’s too late.”

That ad was also paid for and promoted by Brnovich’s campaign, according to its fine print.

There is even a Brnovich for Senate ad which supports Trump’s political interests without mentioning the attorney general’s name except the itsy bitsy fine print at the bottom showing it was paid for by his campaign.

“Endorse Trump for President in 2024! Join a list of Day 1 MAGA conservatives endorsing President Trump for 2024,” it reads. Clicking on the ad redirects to Brnovich’s campaign page with donation options.

The cease-and-desist notice from Trump’s attorney also details the former president’s concern with an email sent by Brnovich’s campaign. The email contains the text “ACCOUNT TERMINATION NOTICE” in the subject line.

Upon opening the email, recipients are given an opportunity to receive various Trump-related communications by donating to Brnovich’s campaign.