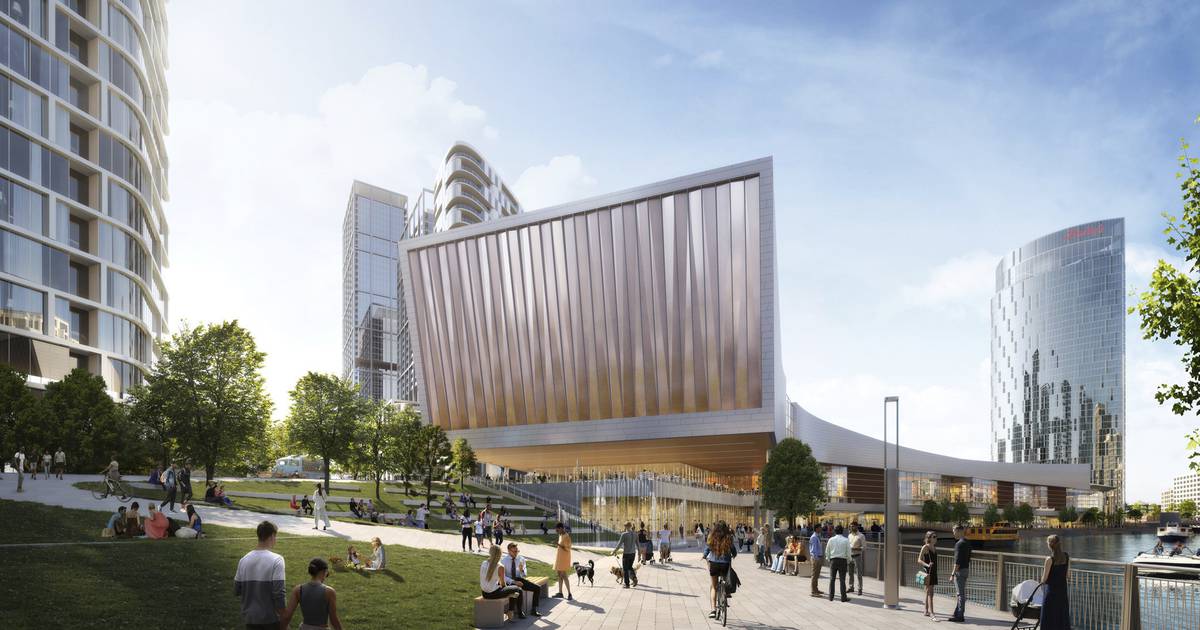 The potential for the casino to bring increased traffic, increased crime and decreased property values to the River West neighborhood were among the worries city officials and the developer attempted to address at a sometimes-tense town hall meeting Thursday evening.

Hundreds of people attended the gathering at University of Illinois Chicago to learn more about the proposal by Bally’s for a $1.7 billion casino, hotel and entertainment redevelopment at what is now the Chicago Tribune’s Freedom Center printing plant.

The forum got contentious as people’s comments took longer than 90 seconds and their mic was cut off, prompting others to yell out from the crowd. Some audience members accused the city of skirting public feedback by choosing a final proposal before a special City Council committee made a recommendation.

Mayor Lori Lightfoot is in Texas for campaign and official events, but she addressed attendees in a video message, thanking them for their interest in the proposal and promoting it as a plan that will financially elevate Chicago.

It’s estimated that the Bally’s proposal will generate about $200 million in annual tax revenue for the city — though some questioned those claims. And such touted benefits might do little appease nearby residents wary about a gambling complex moving into neighborhood.

But the main theme of many commenters was, as one nearby resident said, “Casinos simply do not belong in residential areas, period.” She called her neighborhood near the proposed site “quiet, stable and family-oriented.”

Jill Funfsinn has lived across the river from the proposed casino site for about 14 years. She decided to attend Thursday’s forum to be better informed about the project, which she’s worried would bring additional noise, traffic and lights to what’s been a quiet community.

“I just hope that they hear the people,” Funfsinn said before the meeting started, “that they don’t just do it for lip service.”

Others raised questions about predatory marketing and gambling addictions, asking Bally’s and city representatives how they plan to mitigate addiction. One man with Stop Predatory Gambling Illinois asked Bally’s whether they’re willing to ban ATMs on the gaming floors to reduce addiction. He cited studies that have shown gambling addiction leads to higher rates of people experiencing depression, divorce, and other issues that affect individuals.

“No amount of revenue to the city is worth people’s well-being,” he said.

A Chicago Hospitality Workers Union representative, which represents many immigrant workers and women of color, said many people in the industry are still out of work and after being laid off during the pandemic. She hopes the project gets underway so that people can be offered good jobs that will allow their members to sustain their families.

There was also indications of compromise: Speakers questioned a plan for a pedestrian bridge that would link the entertainment complex to a nearby residential area, prompting Bally’s Chairman Soo Kim to say he would scrap that part of the plan.

Lightfoot announced last week that she’d chosen to advance the Bally’s proposal over four other bids. It still needs to be approved by the City Council then by the Illinois Gaming Board. The developer aims to open a temporary casino within about a year and have the permanent location operating by 2026.

Bally’s has signed a letter of intent to set up its temporary site at the landmark Medinah Temple building, at 600 N. Wabash Ave. in River North, a choice that has already spurred its own neighborhood opposition, including from local Ald. Brendan Reilly, 42nd Ward. He called the idea “horrible” and also raised concerns about a newly introduced ordinance to allow liquor to be served inside the temporary casino.

Some residents near the proposed permanent location have also strongly opposed the Bally’s proposal every step of the way.

The River North Residents Association, which represents nearly 23,000 people living near the proposed Bally’s site, has expressed concerns about crime, traffic, safety, noise and the use of the Chicago River, with more than 86% of 2,311 survey respondents opposed to the casino.

The entertainment complex’s plans include a 500-room hotel tower, a 3,000-seat theater, an outdoor music venue, six restaurants and a casino with 3,400 slots and 170 game tables.

The Bally’s plan requires demolishing the 41-year-old plant and relocating the Tribune printing operations to make way for building the permanent casino.

The casino company has an option to buy the 30-acre site Freedom Center from Dallas-based Nexstar Media Group, which acquired it in 2019 as part of its $4.1 billion purchase of Tribune Media, the former broadcast parent of Tribune Publishing.