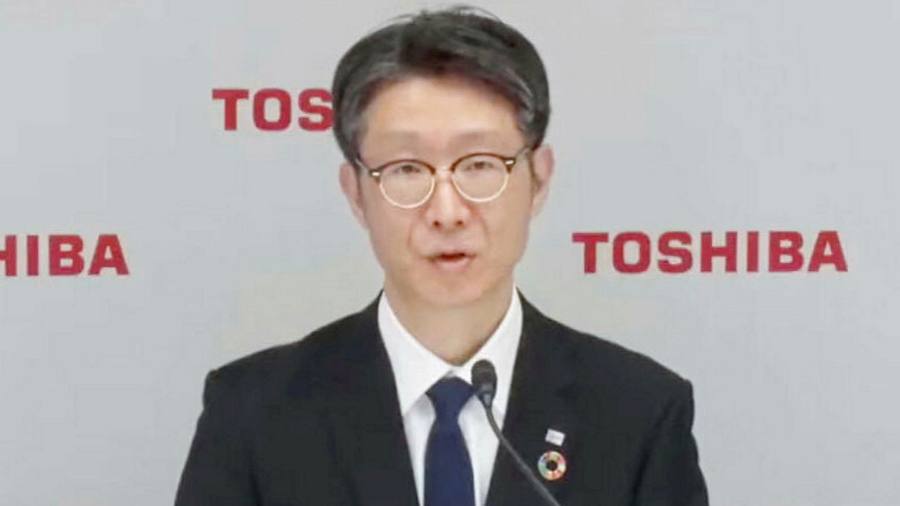 Taro Shimada said that he would have no problem being remembered as the chief executive who sold Toshiba, as long as any deal “makes the company great”.

The blunt statement, made during an interview with the Financial Times, followed 24 hours of boardroom mayhem at the Japanese conglomerate, as a fragile truce between the company and its shareholders imploded after just one week.

Shimada, who became chief executive in March following a string of top-level departures, leads a 146-year-old company that has lurched from accounting fraud to financial crisis and a protracted war with activist investors. It is now controlled by an openly divided board.

When asked how he wanted to be remembered, Shimada said: “As the CEO who achieved the rebirth of Toshiba.” He added that he did not mind being remembered as the person who sold Toshiba, saying: “I mean at the end of the day, from my perspective, [I want] to make the company great in whatever way. I’m open to any kind of option.”

Ten potential bidders have submitted proposals, with possible buyers including US private equity groups Bain Capital, KKR and Blackstone. The company will narrow the field this month and move to a second round later in the summer.

Last week, in a move welcomed by Toshiba’s fiercest critics, the company said it was appointing two new board members from Elliott and Farallon — activist funds that collectively hold about $2bn of Toshiba stock.

Despite the initial appearance of unanimity, however, Mariko Watahiki, a former judge who sits on the Toshiba board and had led the attempt to entice a Farallon representative on to the board, suddenly changed her mind.

She said that her objection to the appointment of Farallon’s Eijiro Imai and Elliott’s Nabeel Bhanji was noted in the formal convocation notice for Toshiba’s AGM later this month, and underlined that message at a hastily called press conference on Monday night.

Watahiki, who asked Toshiba’s staff to help organise the press conference, defended her decision to oppose Imai’s appointment, saying that it would upset the balance on the board.

“I don’t believe Toshiba’s board is divided or in chaos because I voiced my opposition,” Watahiki said.

According to people close to Toshiba’s board, Watahiki has clashed with Raymond Zage, the founder of Tiga Investments and former Asia head of Farallon. Zage has consistently spoken up for shareholder interests in board meetings and criticised Toshiba for issuing what he believed were misleading statements to media and investors, the people added.

In a letter Farallon sent to Toshiba’s board on Tuesday, the fund said it was considering legal action against the company and called for an independent investigation into Watahiki’s alleged attempts to influence the judgment of proxy advisory companies and shareholders.

“We cannot fathom why director Watahiki had asked Mr Imai to become a director in the first place, only to ultimately vote against his nomination and then spearhead a negative publicity campaign,” Farallon wrote. “It is highly regrettable that our recent positive and constructive engagement with Toshiba has come to this point.”

In a joint interview with Shimada, Jerry Black, who chairs Toshiba’s special committee set up to assess potential private equity deals, stressed that the management was aligned with shareholders.

“One director voiced public opposition and that doesn’t change anything in terms of our recommendations,” Black said. “You had eight years of destroying shareholder trust and we now have a new CEO. We’ve nominated seven new board members. We also think it’s a new chapter.”