This school wasn’t built for the new climate reality. Yours may not be either 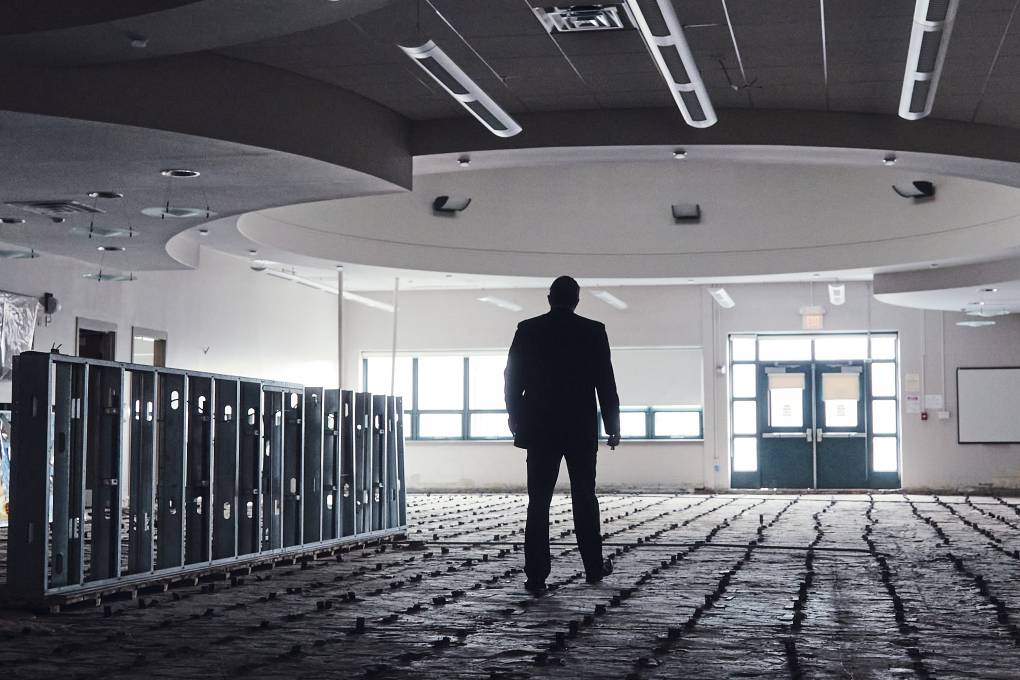 As practice was ending, Verderese heard a huge crack of thunder. “The custodian yelled to me down the hall, ‘Joe, did you hear that?’ And I was like, ‘We gotta get out of here.’ “

Seven inches of rain from the remains of Hurricane Ida hammered down in just a couple of hours. The water poured through the school’s vents – vents set just a few inches above the ground. It turned the auditorium into “an aquarium,” says math teacher Michael Mirkovic. It flooded classrooms, the office, the boiler room.

Giuseppe Martino, the custodian who had called out to Verderese, ended up trapped in the gym overnight by rising water.

Now, about seven months later, this school – a modest one-story rectangle built in 1962 – is still sitting unusable by students. Repairs have barely begun.

“What the inspectors have told me is, ‘Mike, you don’t have a school. This is now a building,’ ” says Superintendent Michael Burke.

Many schools weren’t built for our new climate reality

Almost 1 in 5 U.S. students attended schools in districts that were affected by federally-declared natural disasters from 2017 through 2019. That’s according to the latest available analysis from the U.S. Government Accountability Office.

Hurricanes in Florida and Texas, wildfires in California and Colorado, floods in North Carolina and Arizona. Across the country, climate change has been driving more severe weather.

As a result, weather and climate disasters are becoming ever more common and more expensive, with 2021 setting a record that was beaten only by 2020, according to the National Oceanic and Atmospheric Administration.

The most common, and the most costly, of these disasters are floods. The cost to communities has increased by about $100 billion each decade since the 1980s, according to researcher Laura Lightbody, who authored a national report on flooding and schools for the Pew Charitable Trusts.

And that reality is slamming into another reality: aging school buildings that were designed and built in a time of less intense weather.

Cresskill is a notably affluent school district, where only 1% of the students receive free or reduced-price school meals. A district like this is struggling to fix a single, 60-year-old building – and lower-income communities are even worse off.

What it takes to rebuild one flooded school

After he learned the extent of the flood damage, Mirkovic, the math teacher, recalls the pang of realizing that all his supplies were ruined, including the new TI-86 graphing calculator he had left in his desk. “I’m like ‘Oh, man, my stash! Why did I leave it in the bottom drawer?’ “

Inspectors estimated the projected cost to repair the school building and replace what was destroyed – from Bunsen burners to sousaphones – was $21.6 million. That’s more than two-thirds of the district’s entire annual budget, most of which was already committed to things like salaries, Burke says. The district had purchased private flood insurance five years before, but because the school was located in a flood zone, the insurer limited their potential payout to $2 million. That barely covered the initial cleanup and assessment

Families move to Cresskill for the schools. It’s got a small-town feel. Many students used to walk to school; juniors and seniors would go to Ray’s Pizza off Piermont Road for lunch.

When the reality of the damage set in, Cresskill parents – an exceptionally educated, resourceful group – banded together to lobby everyone they could think of for help.

“We met in the basement of one of the parents’ homes,” recalls Stephanie Cropper, the mother of an eighth grader. “And we just started to say, ‘What can we do?…We can either kick and scream and cry, you know, ‘boo hoo,’ or we can really get our local politicians engaged and figure out what we need to do to help.”

The Board of Education hired a private recovery consultant. “We contacted everyone in the state of New Jersey, from the county, to state officials, the governor,” says Superintendent Michael Burke.

Of course, they weren’t the only people needing recovery help. Of the 91 people Ida killed across the country, 32 were in New Jersey, showing just how dangerous flooding can be. By January 2022, the Federal Emergency Management Agency, or FEMA, had provided more than $711.7 million to help the state recover from the storm. But none of it had gone to Cresskill.

To rebuild, Burke’s district would first have to pay for the repairs, and then be reimbursed up to 75% of costs by FEMA.

But his district was prohibited by a state statute from borrowing any money without approval by voters. They couldn’t even sign a purchasing order for new boilers to replace those damaged from the flood.

Ultimately, it came down to one problem: No one at any level of government was writing them a check.

“If you don’t have the money, you can’t spend it,” Burke says. “No one is going to do this kind of work without a guarantee for payment.”

The flood damage forced a return to remote learning

With no usable building, the fall 2021 school year started remotely. No one knew for how long, and students struggled with the indefinite return to Zoom.

Mirkovic works with special education students. He says they were supposed to keep their cameras on during class, but they would disengage by slowly tilting up their laptop screens, until all he could see was the ceiling fans – the digital-era version of slouching in your seat.

Starting In November, Cresskill was able to borrow space for classes at a local church, but it was small. Grades took turns; students could only go in person one or two days a week. Band practice was mostly on Zoom. Students played along to Verderese’s recordings. They stayed on mute, so he couldn’t hear how they sounded.

George Koprowski had been looking forward to coming back to Cresskill in person for ninth grade. As a member of the color guard, he was at band camp the day of the storm. The next day, he saw the photo everyone was sending around social media: water filling the auditorium, covering the seats.

“Seeing that – that really left me in shock. I couldn’t believe that would happen to our school.”

“It was very disappointing,” adds Tiko Tvauri, a sophomore, who plays volleyball. Ida flooded her own basement.

“We were all eager to go back, and seeing everyone else around us go back to neighboring schools, it was disheartening.”

Some students transferred to nearby private schools, but those schools quickly grew waiting lists. Tvauri and Koprowski decided to stay, to be with their friends.

Parent Stephanie Cropper tears up when asked how her daughter’s been doing. “I think all of them have had a hard time with relationships.”

With no one else to turn to, Cropper and her fellow parents realized that their only help would have to come from the local community itself. On Jan. 25 the borough of Cresskill, population just over 9,000, voted in a referendum to approve a $21.6 million bond to rebuild the school and replace what was lost. It was the only way to get around the state statute and raise the money up front.

Once the money is spent on repairs, the district expects FEMA to reimburse 75% of the cost, and the state of New Jersey to cover another chunk. So the ultimate estimated price tag will be just $83 a year for the median homeowner in the borough of Cresskill. The intention is to have the school building ready for fall 2022.

What it looks like to plan for future disasters

Laura Lightbody, the Pew researcher, says nothing about Cresskill’s saga to rebuild is surprising to her. She says this is a national pattern: Schools often sit awaiting repairs for months or even years after disasters.

“I can think of West Virginia, for example, where schools are still working on rebuilding and repair following 2016 floods.”

Or take Louisiana, where Calcasieu Parish schools suffered an estimated $400 million in hurricane damage to its buildings from Hurricanes Laura and Delta in 2020. In contrast to affluent Cresskill, about half of Calcasieu’s students come from low-income families. A year after the storms, the district had received only $116,000 in FEMA relief; classes were being held in buildings with bare concrete floors and roof leaks.

And an even more pressing issue is that simply rebuilding and repair aren’t good enough. Because this is unlikely to be the last storm or flood in Northern New Jersey – and certainly not in the nation.

“Climate change being what it is, and the way the current weather patterns are, you know, this most likely will happen again,” says Cropper, who went door-to-door to lobby her neighbors to vote for the money to fix Cresskill.

She says a lot of the people who voted against the referendum cited, “the fact that they didn’t want to see, you know, money go into the school repairs for it to just flood again” without upgrades to make it more secure.

A FEMA spokesperson told NPR that preparing for the next disaster is part of their mission. One of their specialists will be working with Cresskill’s engineers “to determine the best feasible solutions to mitigate the source of the flooding, and not just repair back to pre-disaster conditions.”

The U.S. Army Corps of Engineers also came out to take a look in December 2021, to see if they might help protect this school from the creeks that surround it on three sides. To keep water away from buildings, the Corps does things like build levees, restore wetlands to improve drainage, and dredge creeks to prevent backups.

A spokesperson told NPR they are still early in the process, “exploring” a “potential study” to reduce flood risk in the area.

But that’s all long term. Superintendent Burke wants to open his school next fall. He says the most obvious flood prevention move for the school building itself – raising the vents the water came in through – would both cost too much and take too long.

“That would add at least another eight months to a year to the project, as per architects. We can’t wait that long … If we weren’t coming off of COVID, it would be a different perspective. But we are. The kids have not been in this building on a regular basis since March of 2020. That’s a problem. That’s the issue.”

The current solution they are eyeing? Getting flood guards – essentially caps for the vents. When heavy rain is in the forecast, Burke says, they’ll have to close school early to put the caps on. It’s a literal stopgap.

The show must go on

In February, just as the repair funds were starting to come through, Cresskill finally found a more suitable temporary home – the educational campus of nearby Chodae Community Church.

All the grades can now meet in person, at least three days a week.

It wasn’t perfect, but Joe Verderese was thrilled to have the band practicing all in person again. It was crunch time for the spring musical, Seussical. Tiko Tvauri played a bird. George Koprowski was the Grinch.

How To Become a Teacher, From Getting a Degree to Getting a Job

Teachers Shared 29 Small, Inexpensive Things That Have Improved Their Teaching Lives, and We Want Them All