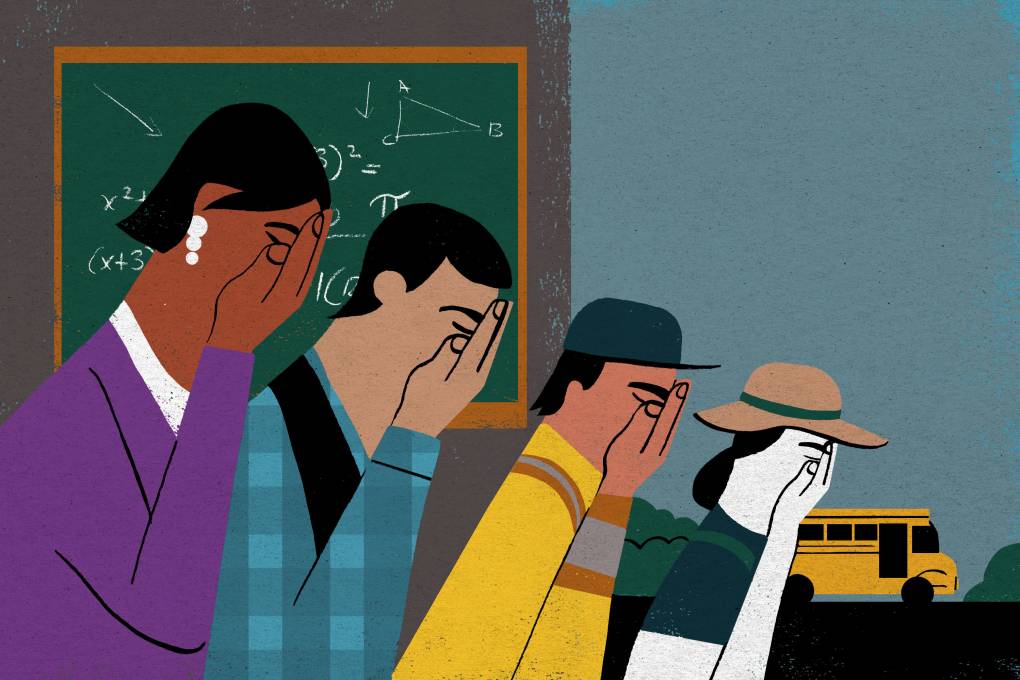 Educators are taking blows from all sides, and they sometimes feel like no one is hearing them. That is the key finding of a big, new COVID-19-era survey from an American Psychological Association task force. Responses, collected between July 2020 and June 2021, came from nearly 15,000 school personnel – from psychologists to bus drivers – in all 50 states. On Thursday, Shonkwiler told her story to members of Congress and the task force briefed lawmakers.

As part of the survey, educators contributed around 7,000 written responses, says Ron Avi Astor, a school safety researcher at UCLA and a member of the task force.

“I read every single one of those 7,000. I had to stop every 20 minutes just tearing up and crying, how powerful they were.”

Here are some of the task force’s key findings.

Children act out physically when their needs aren’t being met

Shonkwiler, the experts and the respondents to the survey were clear that children act out physically when they have significant needs that aren’t being met, perhaps because they have trouble communicating them.

“Most kids aren’t being violent because they’re choosing to,” says Shonkwiler. “There is an underlying need that we have to get to.”

Linda Reddy, a school psychology professor at Rutgers University, and a member of the task force, says the solution is not in punishing individuals.

“Violence against teachers – it’s an organizational system health problem. This is a public health issue,” she says. The answer lies in “training teachers and supporting teachers on how to use research-based practices.”

This includes evaluating children for special education services and interventions in a timely way. As it stands, it can take months for a student who is acting out in class to get the help they need, survey respondents told the task force.

Then, specialists create a behavior plan, but that’s just the first step. Everyone in the building needs to be trained and confident on how to follow those plans, Reddy explains. Shonkwiler says, in her experience, educators, especially in rural areas, often lack training.

The task force speculated that staff members, including police officers, reported experiencing violence more often than teachers precisely because they are called into tense situations and don’t know the best way to de-escalate.

Shonkwiler and other survey respondents said the number of disruptions has gotten worse during the pandemic. Children came back to school with missed learning, rusty social skills and sometimes trauma from being in unsafe homes.

“Everybody kind of had to come back and learn, ‘OK, what does it mean to be a student again’?” Shonkwiler says.

Verbal aggression is more likely to come from parents

Verbal aggression, the task force members agreed, is in some ways an even tougher issue to manage. That’s because it’s very often coming from parents.

The survey’s definition of verbal aggression goes far beyond an unpleasant conversation. It asked about threats, slurs, bullying, online harassment and sexual harassment.

Administrators were the ones most often caught in the crossfire: 42% said they experienced this behavior from parents, while 37% said they got it from students.

Meanwhile, 33% of teachers reported verbal aggression from students, and 29% from parents.

Sara Foppiano, a high school teacher in Washington state who was not part of the survey, says the hostility from parents and other community members is the worst she’s seen in a decade of teaching.

“I don’t get paid enough to put up with this kind of verbal abuse,” she says. “I don’t know how much longer I can really exist in a space where I’m constantly being attacked, but I also need to do you know, ‘the customer is always right’ kind of response and just sit and take it because I’m a teacher.”

She thinks Zoom school made things worse, because parents can walk by, overhear and take things out of context. “It’s like they’re looking over my shoulder and auditing how I do my job.”

A parent complained about her Black Lives Matter t-shirt. Parents rejected her requests that students follow the mask policy. Another parent berated her on the phone for more than 20 minutes after she called to do a routine welfare check on a student who wasn’t handing in assignments.

“After that phone call, I went and cried in a colleague’s office for a little while. And then when I got back to my classroom, I had a missed call from my administrator because that parent had then hung up with me and immediately called the administrator to report me for targeting their child.”

Reddy, at Rutgers, observes that everyone in the school community is carrying a lot of stress right now, and teachers and administrators may be ending up as dumping grounds.

“The level of mental health needs for school personnel, children and of course parents is at the highest level it’s probably been in this country. And the pandemic … has highlighted the inequities and also the mental health needs that are being not addressed for families and communities and schools.”

How lawmakers can help

backed several bills that have to do with educator training, as well as supplementing payand replacing education jobs lost to COVID-19 budget cuts.

Ron Avi Astor at UCLA says that he wants to do more research on the approximately one-fifth of schools where people reported no ongoing problems with violence, verbal or physical.

“We spend almost no time talking about positive places that have had obstacles and overcome them … We could learn a whole lot from those places too.”

Stop Posting Pictures of Students Who Benefit From Your Charity Drives