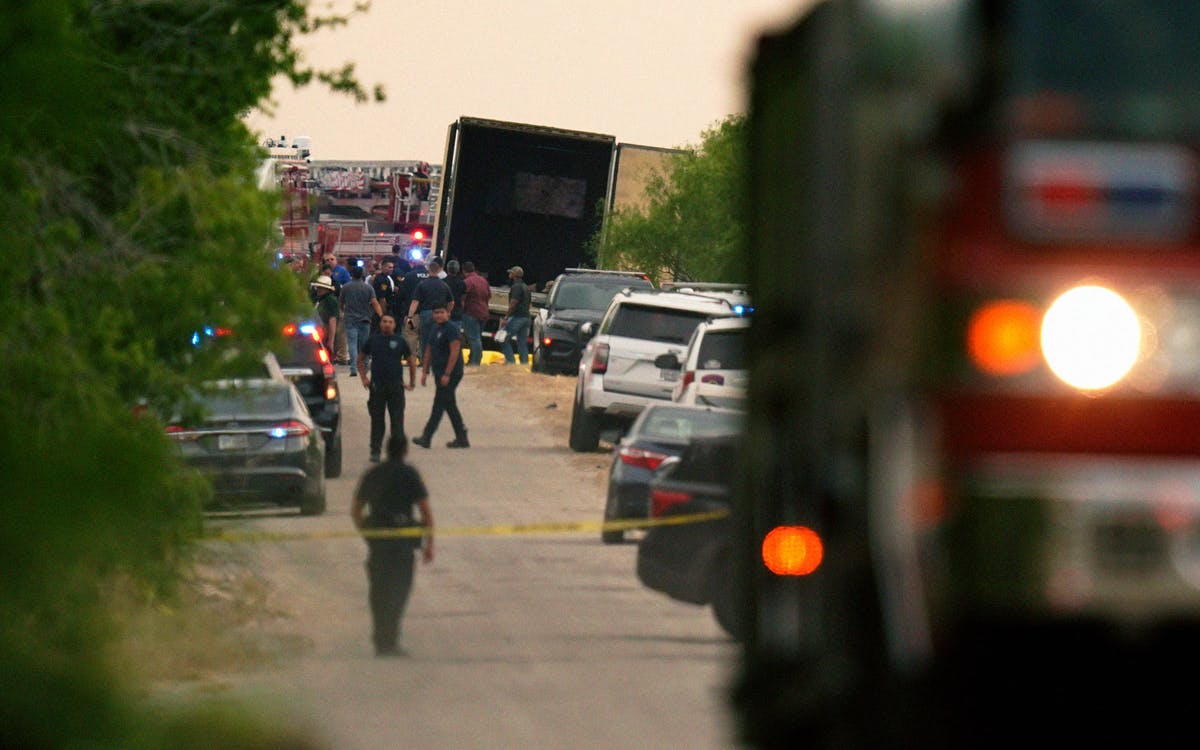 To the southeast of San Antonio, a dirt road runs along train tracks through a dusty patch of mesquite. The area is isolated: the only businesses around are salvage yards, and the buzz of industrial equipment and the din of trains are often the only noises. These are likely the last sounds that 51 migrants heard earlier this week, before they succumbed to brutal deaths caused by extreme heat. Early Monday evening, authorities found a semitruck full of migrants parked on the dirt road. Of the group, which included children and families, 46 had already died. When first responders transported the few survivors to the hospital, the survivors’ bodies felt hot to the touch, the way metal feels when left out in the sun. At least five of those rescued later died in the hospital, the heatstroke too severe, the dehydration too dire for doctors to revive them.

A few details have emerged about the dead, their identities, and what happened to them. On Twitter, Mexico’s foreign secretary offered an anguished acknowledgment that 22 Mexicans had died, as well as seven Guatemalans and two Hondurans (the rest of the victims have yet to be identified). While we can infer why the migrants were in the truck (the place where they were found has been used before by smugglers as a drop-off site), we don’t yet know the full story. We do know, however, that the migrants had families, and that they leave behind loved ones who now must find a way to live with the knowledge that their family member cooked to death in a foreign country. An Indigenous father in Guatemala shared that two of his daughters were among those who died in the trailer. Their names were Griselda and Carla.

Perhaps the most sordid detail of this whole tragedy is how routine death has become in the Texas borderlands. While mass casualty events like the one in San Antonio are rare, across the length of the border dozens of migrants are dying every month with much less news coverage. Take, for instance, the area that Border Patrol calls the El Paso sector: In the canals and deserts around that city, Border Patrol has found at least 37 bodies since last October. At least ten migrants have drowned in the past three weeks in that sector alone. Advocates in the area say that they’ve never seen so much death in such a short period of time.

Although the number of crossings typically drops during the summer, as temperatures top out at over 110 in some parts of the border, in the past two years it has stayed remarkably high throughout the hottest months. In May 2020, Border Patrol encountered 23,237 migrants; this May, the number was 239,146—more than in any single month in the past three years. The reasons for the record number of crossings are complicated: Mexico, where most migrants are currently coming from, is in the midst of a historic wave of cartel violence, as gangs battle for turf and send tens of thousands fleeing; at the same time, a serious labor shortage in the U.S. means opportunities are available in the North.

There’s every indication, in other words, that we’re living through a historic crisis in migrant death. Migrants are dying in the desert, they’re falling off border walls, they’re drowning in the Rio Grande, they’re getting crushed in car accidents. Even before they reach the border, more are dying in Mexico on their way northward. Last December, 54 Central Americans trying to make it to the United States died in a truck crash in southern Mexico.

In the wake of mass death such as the most recent tragedy, it is difficult to know what is to be done—even on the most practical level. Authorities have struggled to find morgues for the huge number of bodies. Then there are the broader policy questions: what caused this, and how do we stop it from happening again?

Governor Greg Abbott was predictably quick to assign blame. “These deaths are on Biden. They are a result of his deadly open border policies,” the governor tweeted Monday evening. The president, in a statement Tuesday, blamed the deaths on the growth of smuggling networks on both sides of the border. “This incident underscores the need to go after the multibillion-dollar criminal smuggling industry preying on migrants and leading to far too many innocent deaths,” Biden said.

Both Abbott’s and Biden’s arguments are simple and self-serving. The governor’s statement made no sense at all. If the border were truly “open” and easy to cross, why would migrants risk being smuggling across it, packed into the back of a truck in triple-digit heat? Likewise, Biden, in his rush to place the blame on smugglers, ignored the role his immigration policies might have played in the tragedy.

Fundamentally, both politicians ignored basic reality: the border is more closed today than it’s been in almost all of modern American history. Biden kept in place draconian Trump-era policies, most notably Title 42, which empowers the mass expulsion, without trial, of migrants crossing the border, even if they try to seek asylum. Long under pressure from immigrant advocates and fellow Democrats, the president announced in late March that he would rescind the Trump order, effective May 23. A federal judge has blocked the move. Under the policy, Biden has “expelled” more than 1.1 million migrants. To put that in perspective, it took Trump more than three years to deport that many.

Because a legal pathway to asylum is no longer guaranteed, migrants in northern Mexico—many of whom have already been expelled at least once under Title 42—have been incentivized to try and cross undetected. Smuggling networks, already well established by criminal organizations trafficking both drugs and humans, have been quick to meet the demand. Migrants can pay upwards of $2,000 for the men whom Mexicans call coyotes or polleros (and who are often U.S. citizens) to take them across the border.

While smuggling across the U.S.-Mexico border is as old as the border itself, what’s changed in 2022 is that U.S. Customs and Border Protection is larger and more powerful than it’s ever been. Today, CBP is one of the largest law enforcement agencies in the world, dwarfing all other federal agencies, including the FBI. Along with more personnel, Border Patrol now deploys drones, heat vision sensors, high-tech camera and radar arrays, and even robotic patrol “dogs.” The border wall is also longer and taller than it’s ever been.

With increased enforcement, migrants don’t stop coming. Some are crossing in more and more remote areas, like the Baboquivari Mountains in Arizona, or the cliffs and deserts around Big Bend; Border Patrol has found dozens of human remains in these hostile environments. Other migrants are paying dangerous smugglers to get them across, often through legal ports of entry. As the horror in San Antonio demonstrates, these smugglers have little regard for their clients’ well-being.

When migrants die, their deaths quickly become statistics—evidence for or against one’s preferred immigration strategies, props for preformed talking points. For those committed to somehow “sealing” the southern border, tragedies like this are an opportunity to argue that if only it were harder to cross the border, migrants wouldn’t undertake the dangerous journey. This line of argument is based on deterrence, the notion that we can end illegal migration not just by arresting border crossers but by making the prospect of crossing so unappealing that folks don’t leave their homes in Mexico or Central America or Haiti or Venezuela.

Back in a place like Guatemala or Mexico, would-be migrants understand quite clearly that folks are drowning in the Rio Grande, dying in deserts and detention centers, or roasting to death in the back of trucks. And yet migrants have continued to come. If the endgame of deterrence is making the border hard to cross, it’s difficult to imagine what sort of gauntlet is more terrifying, more likely to “deter,” than the images the world saw this week in San Antonio. This of course won’t dissuade our leaders, both Democratic and Republican, from pursuing a deterrence-based border strategy, and this won’t be the last mass death we see on our border.

There’s little reason to think U.S. policy will change in any way that will prevent those deaths. In 2021, Biden attempted to undo one element of Trump’s deterrence policy—the Migrant Protection Protocols, better known as “Remain in Mexico.” The MPP is similar to Title 42, in that asylum-seekers are immediately returned to Mexico; but under the MPP, asylum-seekers get the chance to come back to the country and eventually argue their asylum cases in court. In the first year of his presidency, Biden tried to get rid of the MPP, while keeping Title 42 in place—thus assuring that his administration could expel as many border crossers as it wanted. Nonetheless, Texas sued the administration, arguing that it must keep the Remain in Mexico plan in place. A Texas federal court issued an injunction, and Biden has since been forced to place asylum-seekers back in the program while the case made its way to the U.S. Supreme Court.

The Supreme Court will issue its decision on that case on Thursday morning. Regardless of the status of the Remain in Mexico plan, however, as long as Title 42 is in place the most desperate will still continue to try to cross undetected—often more than once. Some might indeed be deterred, but not the most desperate. And their dead bodies will continue to be found in rivers, deserts, mountains, and trucks.