The Revivalists and Trombone Shorty to headline 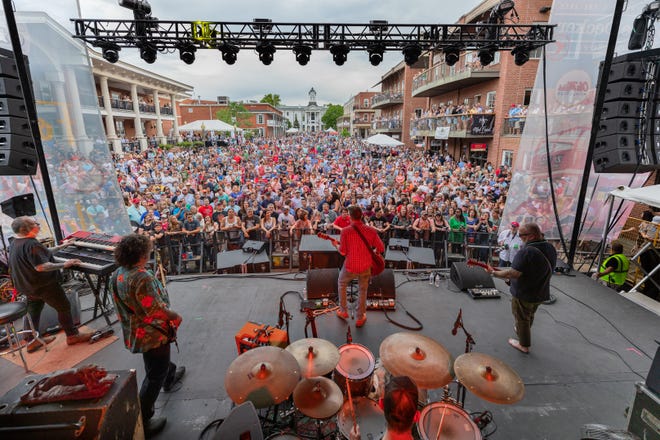 Rodney Claxton has been selling his iconic birdhouses at Oxford’s Double Decker Festival for about 14 years, and he has missed the past two years more than he cares to admit.

On April 22, after being on hold since 2019 due to the COVID-19 pandemic, however, he will be back in business as Oxford will once again host the Double Decker Festival, which has become one of the most significant festivals in Mississippi and the South.

“I was crushed when we didn’t have the festival during COVID-19,” Claxton said. “However, I know the team made the right decision in canceling.”

Now, ready for the onslaught of festival-goers, Claxton of Jonesboro, Arkansas, knows the organizers of Double Decker have planned for everything.

“I do festivals all across the U.S., and the Double Decker Festival is by far the most organized event that I do,” said Claxton, who designs and builds handcrafted, functional birdhouses that house bluebirds, wrens and chickadees. “I’ve been doing festivals for 16 years and the Double Decker Festival is always the best event. It’s the largest and best show as far as attendance and sales I’ve ever done.”

The Double Decker Arts Festival, touted as a Top 20 event by the Southeast Tourism Society, will be celebrating its 25th anniversary on April 22 and is expected to bring more than 65,000 people to Lafayette County.

The name Double Decker Festival is inspired by the red double-decker bus that the City of Oxford imported from England in 1994, to be used for tours of the area.

“We are so excited to be back and finally celebrate the 25th anniversary of the festival,” said Lee Ann Stubbs, the Double Decker Festival coordinator. “After planning and postponing and planning again the last two years, we cannot wait to see everyone back on the square next weekend celebrating food, arts and music.”

There will be more than 140 art vendors at the event, judged by a group of local artists as part of the showcase.

Another artist of note who will be on hand is Dallas native Gresham Meek. She is an Ole Miss graduate who earned a Liberal Arts degree focusing on studio art, art history, English and Italian language. She combines that knowledge with jewelry that is absolutely a piece of art.

“Double Decker is extremely near and dear to my heart. I love this weekend not only because of the fun and frolic nature of the event but primarily due to the significant impact it has had on my career,” Meek said. “A decade ago, my first time showing at Double Decker was my senior year at Ole Miss. The success of the show gave me the encouragement and confidence to pursue my jewelry business full-time post-graduation. I’ve spent 10 years growing my company and I’ve never missed a Double Decker since and hope I never have to.”

‘He is a monster’:Mississippi man smashes state record with 131-pound blue catfish

For subscribers:‘25 years of misery’: The search for the lost graves of Tennessee’s leased convicts

Mississippi music legend Mavis Staples will perform at 5 p.m. Saturday, April 23 during a lineup of musical guests that will rival any lineup anywhere. Staples, now 82, grew up in the Mississippi Delta near Drew and was influenced by some of the greats, including Charley Patton, Son House and Robert Johnson.

She’s both a Blues and a Rock and Roll Hall of Famer, a civil rights icon, a Grammy Award-winner, a chart-topping soul/gospel/R&B pioneer, a National Arts Awards Lifetime Achievement recipient and a Kennedy Center honoree. She marched with Dr. Martin Luther King Jr., performed at John F. Kennedy’s inauguration, and sang in Barack Obama’s White House. She has collaborated with everyone from Prince to Bob Dylan, who famously once proposed to her.

A Square weekend in Oxford, Mississippi

She will be followed by Jazz superstar Trombone Shorty & Orleans Avenue. Nicknamed Trombone Shorty at a young age, Troy Andrews has made a name for himself, having headlined the New Orleans Jazz Festival last year and having played with the likes of Lenny Kravitz, Madonna, Zach Brown, the Red Hot Chili Peppers and more when he isn’t touring on his own.

The headline act will be the chart-topping rock band The Revivalists. Since their platinum-selling single “Wish I knew You” came out 10 years ago, the band has been on a roll worldwide and nominated for a Billboard Music Award, two iHeartRadio Music Awards and named Billboard’s Top New Rock Artist of 2017.