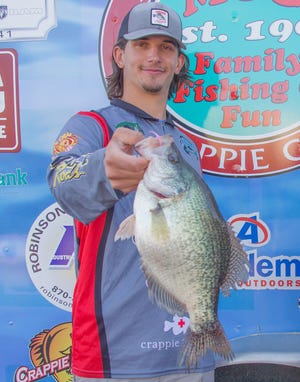 A competitor in a Magnolia Crappie Club tournament recently caught a 3.84-pound crappie on the Ross Barnett Reservoir and as unusual as a fish of that size is, it became even more unusual when it was identified as a hybrid.

“When I saw the crappie I knew it was the biggest fish I’ve ever seen on LiveScope and I’ve been using it for three years,” Jeffries said. “I caught one (3-pounder) at Grenada three weeks ago and it looked small compared to this one. It was sitting on top of a stump in 21 feet of water about 12 feet down.”

Jeffries tried to tempt the fish with his bait, but she moved away and momentarily went out of sight. Jeffries spotted her again.

“She pitched up on it and bit it that time,” Jeffries said. “It all seemed to go in slow motion. I knew as soon as I netted the fish it was something special for Barnett.”

“There could be others, but they don’t keep lake records there,” Jeffries said.

‘HE IS A MONSTER’:Mississippi man smashes state record with 131-pound blue catfish

‘SLAP FULL OF CRAPPIE’:Expect long spawn, big fish and lots of them at Barnett Reservoir

A mix of black and white crappie

At first glance, the fish appears to be a black crappie, but Jeffries noticed some differences.

“I’m pretty sure it’s a hybrid, meaning it’s half white crappie and half black crappie,” Jeffries said. “They’re seeing them in lakes across the nation. You don’t see it very often and you don’t see it in every lake.”

The two fish are distinctly different. Among the most noticeable differences are their color patterns. White crappie have darker vertical bars on them and black crappie have flecks of darker pigmentation covering them with no bars.

Jeffries said that most of the fish’s features appear to be those of a black crappie, but it has faint vertical bars in addition to flecks of color and it has 6 dorsal spines, indicative of a white crappie.

“I had six or eight other people that know the fish and confirmed it was a hybrid,” Jeffries said.

The fish also caught the attention of Keith Meals. Meals is a regional fisheries biologist for the Mississippi Department of Wildlife, Fisheries and Parks. Meals not only identified Jeffries’ fish as a hybrid from tournament photos he saw, he also said he saw two others among the top fish caught.

Meals said research in other states indicates crappie populations can include as many as 24% hybrids. On average, he estimates the number is much lower in Mississippi lakes.

Meals said the percentage of hybrids varies from lake to lake. Lakes with a large number of one species and a low number of another have more interbreeding.

And those hybrid offspring grow quickly. Meals said research at one Mississippi lake showed black crappie taking 5-plus years to reach lengths greater than 10 inches while hybrid crappie grew to the same length in 2-plus years.

“There is such a thing as hybrid vigor,” Meals said. “The (hybrid) crappie grow faster than either parent species.”

That hybrid vigor not only provided Jeffries with his biggest crappie to date, it helped him and his father win the tournament.

“It’s still unbelievable and I caught the fish,” Jeffries said. “I knew it was a once-in-a-lifetime fish and it couldn’t have happened on a better day.”