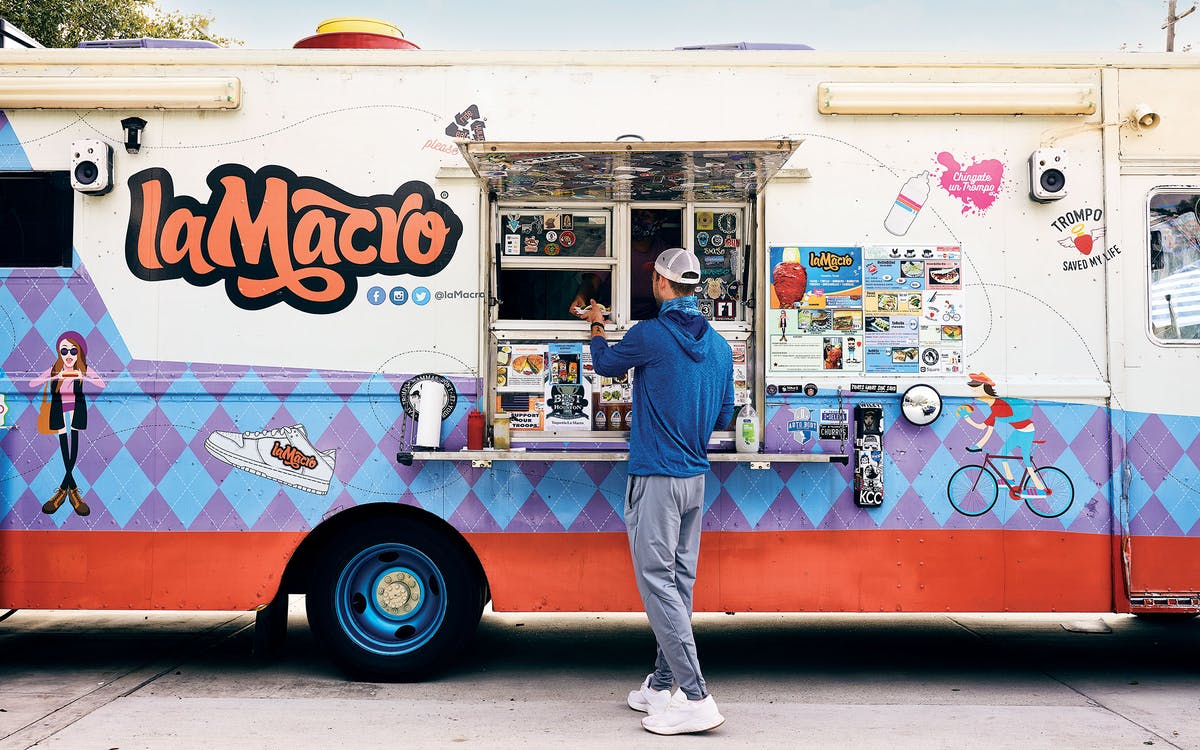 To see all six Taco Trails and to dive into our Ultimate Texas Tacopedia, go to texasmonthly.com/tacopedia.

This story was originally published in November 2020 and has been updated.

Texas’s largest and most diverse city offers tacos from all over the place. We’re not just talking different parts of Mexico; we mean tacos influenced by the cuisines of immigrants from other nations or Americans from other parts of the U.S. who have made Houston home. They range from Cajuns from the Acadiana region of Louisiana to South Asians from India and Pakistan. We can’t forget the Mexican immigrants who continue to settle in Houston or the booming barbecue taco scene in the Bayou City, either.

One slurp of the rich consommé from a bowl of goat birria at Birria de Chivo Trudis and you’ll forget about the social media–driven craze that is Tijuana-style beef birria. First, though, you’ll have to find the restaurant. It’s under the covered drive of a dilapidated shopping center adjacent to a reception hall. Bring cash, as Birria de Chivo Trudis does not accept cards. 6909 Hillcroft, 832-794-4328.

Get to this East Downtown cafeteria-style breakfast taco spot early, lest you care to wait in line. Good thing is, Brothers Taco House is worth the wait, especially for its tingly chorizo and eggs and its barbacoa. 1604 Emancipation Avenue, 713-223-0091.

Victoria Elizondo’s brainchild is a quiet powerhouse in Houston tacos. She and business partner–executive chef Julio Moreno have created a one-two punch with the Cochinita &  Co. space at Kickin’ Kombucha in the East End and the roving Cochi’s Taqueria truck. The latter serves up stellar mini tacos, including the textural double-whammy of the suadero. The Mexico City preparation pleases with a soft interior and a crispy exterior. Then there is the truck’s pro move: rajas con crema. The classic dish features sliced poblanos simmered in a cheesy cream sauce, served in a corn tortilla with a dusting of queso fresco. Of course, you can’t skip out on the cochinita pibil. It’s the namesake taco, after all. Ask for the off-menu salsa macha at either location. The initially mild topping has a long, slow build of spicy heat that flares up at the back of your throat. cochinitaco.com, 5420 Lawndale, Suite 500, 713-309-6410.

Felipe Farias, apprentice to his father, Diego Farias, concisely sums up his family’s view on carnitas: “Live by the pig, die by the pig.” I could hear his chest puffing with pride as he said the words. The silky, slightly salty threads of pork are just as fantastic in a taco as they are in a torta. 9715 Veterans Memorial Drive, 832-643-6423.

One of the Tejano-style barbecue pop-ups that have marked Houston as a capital of Mexican American smoked-meat purveyors, Eddie O’s peddles in straight-up brisket and meat combos as well as tacos, flautas, empanadas, tortas, and the special that’s closest to our hearts, El Corazon. This costra taco (see “Costra” in the Tacopedia) dispenses with the tortilla altogether; instead, a shell of griddled cheese bears the smoky, peppery weight of thick-cut brisket, with a fat slice of pickled carrot to cut through the other prominent flavors. eddieosbbq.wixsite.com/eddieosbbq, 713-659-9961.

This old-school barbacoa joint has been drawing lines for its beef head meat since 1977. Available by the pound and in tacos, the fatty, glistening barbacoa is plated in equally glistening tortillas. Cilantro and onions are available, as is a conflagration of a salsa verde. 609 Patton, 713-699-0820.

Houston’s Sixth Ward is home to one of the city’s great markets, Henderson & Kane General Store. Opened and owned by the Avila family, the shop is housed in a nearly one-hundred-year-old white clapboard building. It stocks loads of Houston-made products, including tamales and salsa from Cochinita & Co. In addition to being a retail store, it’s a restaurant that serves barbecue, steaks, burgers, and more. But it’s the tacos that keep us returning. Available for breakfast daily and on Tuesday nights, they’re filled with in-house meats, including an insanely herbaceous green chorizo.  hkgeneralstore.com, 715 Henderson, 281-974-3557.

To visit Hugo’s in the Montrose neighborhood is to experience the perfect blend of hospitality and food. The 18-year-old restaurant from chef Hugo Ortega and Tracey Vaught offers classic Mexican dishes with touches of playfulness. Chief among them are the tacos dorados de papa, a traditional Mexican fried taco of mashed potatoes in a rolled or folded tortilla. At Hugo’s, the idea of the taco is turned inside out. Here, the tortilla is made with fried potato. The shell is packed with napa cabbage, pickled jalapeño, and pickled onions. There’s crunch, heat, and punch in whimsical form, and it’s available only via the bar menu. hugosrestaurant.net, 1600 Westheimer Road, 713-524-7744.

Of all the so-called Tex-Mex barbecue operations, this one helmed by pitmaster Joseph Quellar is perhaps the most vocal about leaning hard into Texican gastronomy. Through regular pop-ups at 4J Brewing Company and local markets, JQ’s Tex Mex BBQ has found success with plancha-crisped tacos dorados brimming with brisket and beef birria that’s stewed from smoked brisket and oxtail. The latter features a deep richness singular to Quellar’s cooking. JQ’s popularity has led to the development of a trailer and a weekly pop-up at the Politan Row food hall, while Quellar himself has been traveling the country doling out barbecue tacos in places as far away as Connecticut. jqstexmexbbq.com, 832-859-3375.

This truck’s costra, El Primo (the cousin), inspired the aforementioned El Corazon at Eddie O’s. La Esquina’s original is intimidatingly large and comes filled with the protein of your choice. Also good here are the breakfast tacos. The standout comes filled with springy scrambled eggs and cubed potatoes with fluffy interiors. 418 Hunt, Monday–Friday 8 a.m. to 2 p.m., 4 p.m. to 8 p.m.

This north-side truck specializes in the northern Mexico style of tacos al pastor known as tacos de trompo, named for the vertical spit upon which the meat rotates (see “Trompo” in the Tacopedia). The signature meat goes into the taco, burgers, and quesadillas made with flair, including the cheesy, trompo-stuffed Naan-Quesa-Nia. The popular menu item replaces a flour tortilla with chewy, crisped naan bread and is named after a regular customer. Although La Macro has a regular spot, it’s on the move often. vivalamacro.com, 3903 Fulton, 832-618-4611.

This homage to Mexico City’s sit-down taquerias and innovative late-night costras comes with all the expected components: a trompo, house-made tortillas, a top-notch array of salsas, delicate rolls of a griddled Oaxaca-Gouda cheese blend in which are tucked a selection of fillings. Our favorite order at La Vibra Tacos is the vegetarian rajas con queso with spoonfuls of tart tamarind salsa plopped atop the assemblage. Make sure to go traditional and grab an order of iconic tacos al pastor. lavibratacos.com, 506 Yale, Suite A.

The Original Ninfa’s on Navigation

The magic order at the Pit Room? Smoked chicken studded with garlic cloves and served on flour tortillas made with rendered brisket fat. thepitroombbq.com, 1201 Richmond Avenue, 281-888-1929.

Houston has a sizable immigrant population from Monterrey, Mexico. As a result, there are myriad restaurants and taquerias serving Monterreyan favorites, including tacos de trompo (al pastor’s northern cousin) and tacos tlaquepaque (steamed tortillas filled with shredded beef and smothered with an earthy, fiery salsa). There are also hamburguesas estilo Monterrey, which are burgers loaded with the typical American fixings, then gilded with trompo meat, avocado wedges, sliced hot dogs, and jalapeños. These are comfort foods for Monterrayans (also called regios), and comfort is what you’ll find at Tacos Tec. tacostectx.com, 8449 Gulf Freeway, 281-780-5952.

This Telephone Road taco spot doubles as a Mexico-bound bus service stop. So it’s best to find on-street or walkable parking to prevent being blocked in by an idling bus. Choose and point to the fillings for your tacos de guisados in the steam trays behind glass, as long as one is the chilaquiles. The saucy preparation of tortilla strips enmeshed in eggs is sweet and slightly spicy—it’s a joyful dish. The taco and Taqueria Monchys are that great. taqueriamonchys.com, 719 Telephone Road, 713-926-2900.

While waffle-cone shell ice cream tacos dominate the dessert taco scene (see “Dessert” in the Tacopedia), Tarascos is here to remind everyone that every taco, even one meant for those with a sweet tooth, requires a tortilla. At this Mexican scoop shop, that means a sugar-dusted tamarind tortilla nesting mixed fruit and Japanese peanuts—invented by a Japanese immigrant to Mexico in the mid-twentieth century. It’s finished with a dusting of Tajín seasoning and a drizzle of chamoy syrup. This fruit taco, as it’s called at Tarascos Ice Cream, offers the best of Mexican desserts, balancing sweet, savory, and spicy; it will leave you refreshed. tarascosicecream.com, 13932 Westheimer Road, 281-584-9696.

Umair Alem’s Twisted Turban is part of a second wave of Indo-Mex taco (see “Asian-Mex” in the Tacopedia) developing out of Houston. The first wave crested a little more than a decade ago. As it did initially, this blending of South Asian and Mexican cuisine often manifests with a chewy paratha flatbread in place of a flour tortilla, which is the case at Twisted Turban. Especially good are the namesake Turban taco, shredded beef dressed with a bramble of cabbage and squiggles of acidic mango salsa and candy-like “secret” Turban sauce. Also noteworthy is the caulitaco with cottage cheese–like paneer, peppers, and smooth raita and piquant tamarind chutney. 2838 S. Texas Highway 6, Suite B, 281-372-8194.

Xochi, which opened in 2017, offers chef Hugo Ortega’s fine-dining expression of his upbringing in Oaxaca. The downtown restaurant adjacent to the Houston Convention Center serves infladitas de conejo, the puffed tortilla a murky black from the squid ink–infused masa. The pork ribs served in a mole made with Oaxacan flying chicatana ants offer tender meat in a well-balanced sauce and accompanying fragrant nixtamal tortillas, for customizable tacos. Ask for extra tortillas, whatever color they are (it depends what is in stock), to sop up leftover mole in the serving bowl. xochihouston.com, 1777 Walker, Suite A, 713-400-3330.