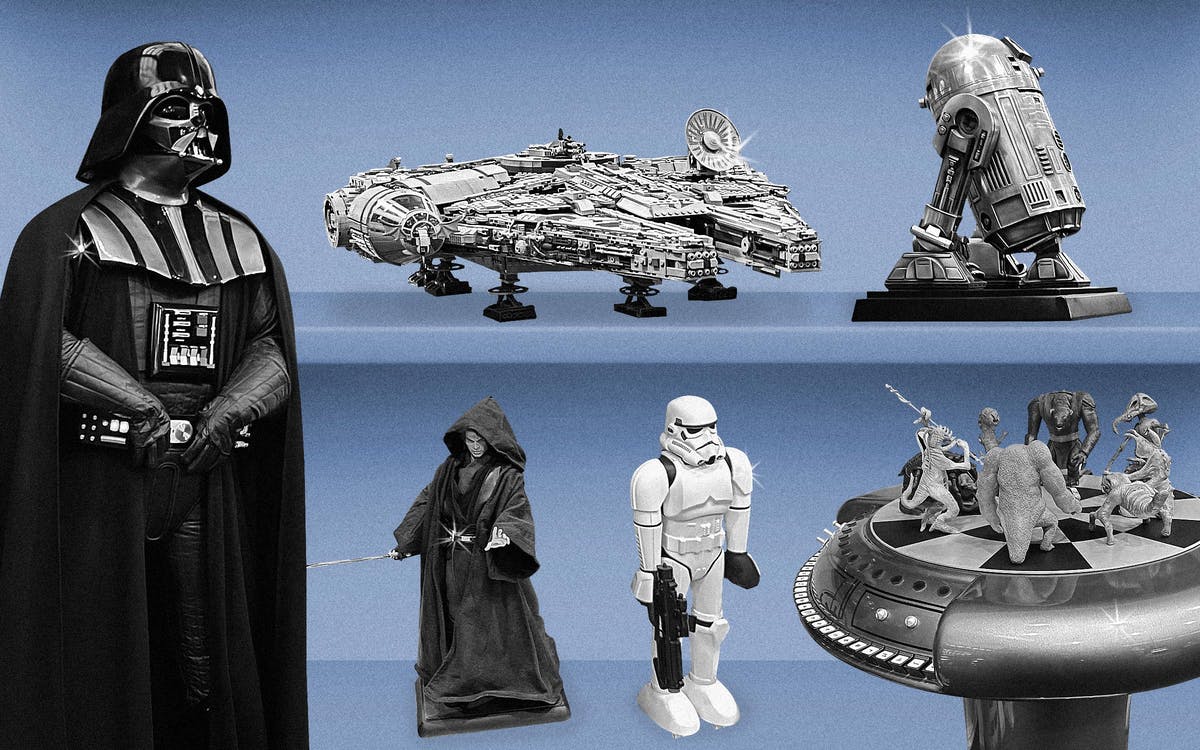 Our series Texas Excess celebrates the hobbyists and hoarders who crisscross the state—and sometimes the world—to add to their pet collections. With obsessions ranging from Santas to salt shakers, these Texans take collecting to the extreme.

The collection at its height
19,000-plus pieces.

Most meaningful piece
A Carrie Fisher–autographed medallion that reads “We’ll always have Alderaan.” Wise was friendly with Fisher during her life, and the piece now has a prominent place in his private museum.

In two adjacent buildings in the North Texas town of Roanoke, in this very galaxy, one man has amassed enough replica weapons and figurine fighters to engage in intergalactic warfare. For nearly three decades, Philip Wise has been collecting such Star Wars ephemera, first as a hobby—a thing to do after retiring from computer sales and the dot-com business in 2000—then as a second-act career and enterprise in its own right. His treasure trove would eventually grow to include 19,000-plus Star Wars–related items; spur an early online collecting community, RebelScum.com; and induct Wise into the world of product licensing and replica manufacture. The two Roanoke structures—one a private Star Wars museum and workshop and the other a storage space—remain the epicenter of Wise’s material obsession.

Wise’s empire began with a fortuitous Star Wars screening in 1995. Wise had long been a Star Wars (and Star Trek) fan, but his daughter, then sixteen, had never expressed interest in the franchise. Suddenly she wanted to watch the original Star Wars film. Then she wanted to purchase an action figure from the film. Then he wanted to purchase all of the available action figures, sourcing them from stores like KB Toys and Toys “R” Us, “all those places that are now gone.”

“Very quickly, we got consumed with finding all the toys,” says Wise. “And it really, for me, it really never stopped.”

Fortunately, for a committed Star Wars collector, there’s no reason to stop. “The universe is covered up with Star Wars stuff,” Wise says. Once he’d obtained action figures of each of the characters from episode four, the film that captured his daughter’s interest, he moved on to bigger, better, higher-quality pieces: “statues of large scale and small scale and replicas of all the props, all the weapons, all the lightsabers. All the blasters, all the vehicles . . . sculptures of full-size figures. Busts, minibusts, full-size busts, scaled busts. . . . That really got my attention.” The busts and statues depict characters from the Star Wars universe. He’s got Stormtroopers, C-3PO, various iterations of Darth Vader, Darth Maul, Obi-Wan Kenobi, and Yoda, plus the weapons, vehicles, and armor that characters utilize throughout the films. His collection includes Millennium Falcons, X-wings, helmets—even Han Solo’s dice.

As his collecting bug caught hold, Wise was developing a concurrent passion: RebelScum.com, formerly known as “Philip’s Star Wars Pictures, Toys and Thoughts,” a site that collects photos and reviews of lightsaber replicas, Princess Leia figurines, Chewbacca dolls, and the like. Wise developed the site after failing to find much information on collectibles in the earlier stages of his habit. Still active today, the site both enabled and exacerbated his fixation. As an authority on available items, he needed to fill the gaps in his collection. As a leader in the collecting community, he caught the attention of figure-making companies that sent him merchandise to promote, turning him into an early-aughts version of an influencer.

The timing of the site’s launch was serendipitous. It coincided, within a few years, with the creation of franchise companies like the now-defunct Master Replicas, which created the multitude of sculptures and replicas that so intrigued Wise and, as he put it, “set the world on fire” (by which he means the collecting world). Just as Wise and his site were getting started, a larger community of Star Wars fans—a passionate group of people if there ever was one—were becoming collectors. The influx of collecting interest helped inflate prices over the years. A vintage 1970s Luke Skywalker figurine purchased at a 1990s garage sale for $3 might cost $100 now. A $550 Master Replicas Boba Fett helmet might sell today for $3,000. Without sharing specifics, Wise says he is “very happy” with how his collection appreciated—he sold off roughly 85 percent, along with the website, last year, having tired of the day-to-day site maintenance. When toted out of his storage space, the sold portion of his collection took up 34 industrial pallets.

Founded by a “group of collectibles-industry veterans,” Master Replicas also modeled another venture for Wise: the collector as collectible maker. In the early 2000s, Wise began consulting with Master Replicas, acting as a conduit to the growing collectors’ community. He now hosts a replica-makers and collectors meetup and creates his own replicas—including a life-size, remote-controlled R2-D2—in a workshop adjacent to his private Star Wars memorabilia museum. You won’t find information about the museum online; instead, it’s open to those who hear about it through word of mouth or who happen to just stumble upon it in the small town of Roanoke.

Many of the artisans who join Wise for the meetups are sci-fi nerds like him, fans of Doctor Who, Star Trek, Battlestar Galactica, and, of course, Star Wars. He credits the fantasy of those films with his own passion. A Downton Abbey fan, he explains, probably won’t collect teapots, because teapots aren’t a part of the fandom’s DNA in the way a blaster is exclusive to Star Wars.

You can find a teapot anywhere—it’s a real item. A lightsaber, on the other hand? “You’ve got to make them.”