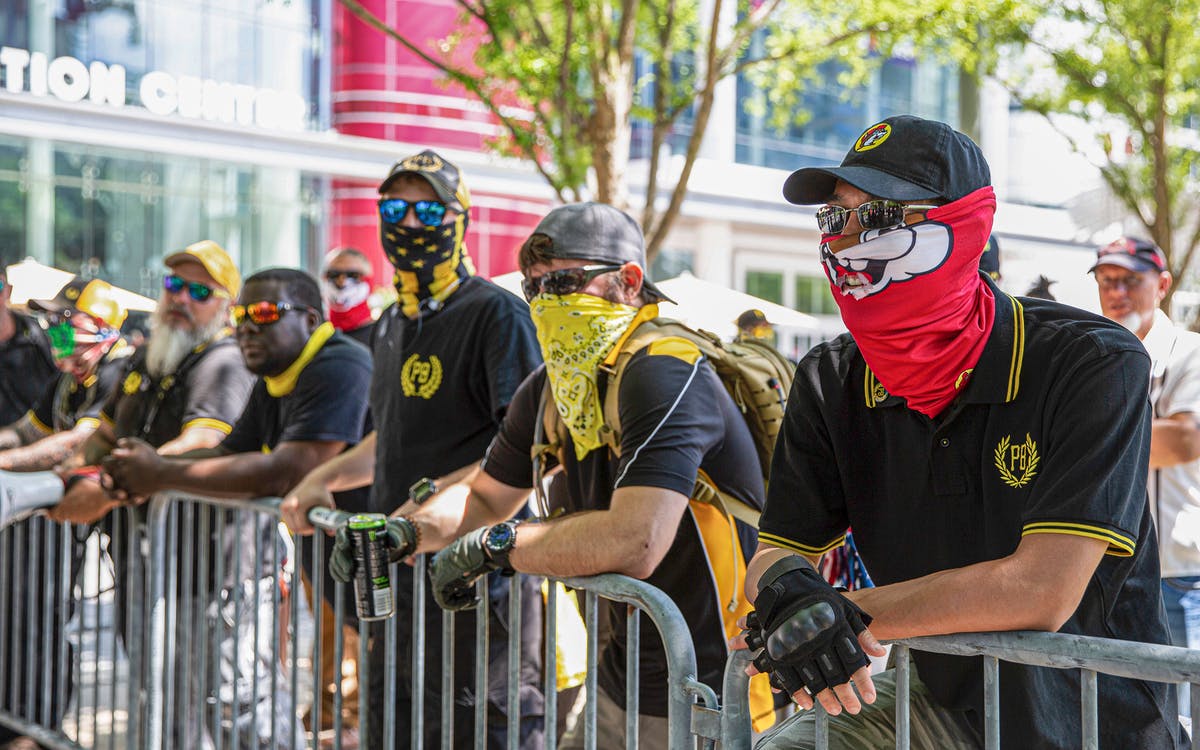 When Lisa West and some of her friends decided to show up to a Pride Month event for families at a public library in the Dallas suburb of McKinney this past weekend, they were expecting to encounter hostility. The friends, all of them members of a Facebook group with nearly five thousand members called the Liberal Women of Collin County, had heard reports that armed homophobic demonstrators were planning to make an appearance at the event as well. The women’s goal, West said, was to form a human wall between vitriol-spewing demonstrators and the families who planned to show up with young children in tow to read Pride-positive books and sing songs together. “We were there to be allies,” she recounted several days later, “so that these families wouldn’t feel threatened by the guys with guns.”

Once she’d taken her place with a Pride poster in her hands, West was able to get a good look at the fifteen or so protesters brandishing firearms and pepper spray. Some of their garb—tactical vests, black and yellow Fred Perry polo shirts, and black baseball caps with laurel wreath emblems—were instantly recognizable symbols of the Proud Boys, the all-male neofascist group that is routinely linked to political violence, including during the January 6 riot at the U.S. Capitol, which led to seditious conspiracy charges for multiple members. But West was surprised to see that several members of the group had added another distinctive garment: a bright red Bucky the Beaver face covering, complete with the rodent’s signature buck-toothed grin, arguably the foremost symbol of the Buc-ee’s chain of huge gas station emporiums.

The same iconic, goofy smile is emblazoned above the entrance of more than forty stores across the state, coaxing drivers off the road and into the chain’s warehouse-size travel centers, where, among other things, shoppers can experience restrooms that have been designated America’s finest, purchase a deer hunting blind, or select from one of 83 types of soda. For ­untold numbers of Texas travelers, the quirky mascot, whose face graces everything from pillows and swimsuits to glassware and beef jerky, is more than a symbol of convenience, it’s a source of state pride that inspires cultish devotion. But when the same imagery is used to conceal the identity of hate-mongering armed agitators, West said, Bucky’s purehearted and lovable visage takes on a menacing feel, like a sweet-hearted clown that has turned sour. “I assumed they were trying to be clownlike and creepy,” she said. “I’m not saying they couldn’t harm someone, but the Bucky masks looked really over-the-top, like these intimidation tactics were a big game to them.”

The Pride event at the library wasn’t the first time far-right activists associated with the Proud Boys have appropriated the Bucky face mask. In recent months, Proud Boys—which the FBI classifies as an “extremist group” and the Southern Poverty Law Center designates as a hate group—have been spotted wearing the mask in cities across the state. Last month, at the NRA convention in Houston, Proud Boys wearing Bucky masks were spotted among the demonstrators outside the George R. Brown Convention Center. This month, at a city council meeting in Frisco, twenty miles north of Dallas, in which local leaders issued a proclamation designating June as Pride month, Proud Boys wearing Bucky masks openly mocked the proceedings and derided members of the LGBTQ+ community who were on hand, referring to them as “pedophiles,” according to one account. Weeks earlier, the same masks were spotted during a violent confrontation between Proud Boys and student protesters at an anti-transgender event at the University of North Texas in Denton. Afterward, as video of the incident circulated online, surprised Redditors slammed the Proud Boys decision to co-opt Bucky’s “good name.” And in recent weeks, the masks were again spotted among anti-gay activists in Frisco and outside a drag queen brunch in Arlington, which is located between Dallas and Fort Worth.

A member of the LGBTQ+ community in Dallas who has encountered Bucky mask–wearing far-right activists on several occasions, but who asked to remain anonymous lest he be targeted by the same individuals, said he thinks they’re wearing the masks to keep folks who encounter them off-balance—to “mess with your mind,” as he put it. “It’s all about trolling and signaling and taking something innocent like an ‘okay’ [hand] sign and turning it into a symbol of white power,” the activist added. “It gives them this plausible deniability, so they can say, ‘This mask is not a white power symbol, it’s just a cute little beaver mask.’”

Should the mask grow in popularity among far-right activists, Buc-ee’s and its many fans might not find it cute at all. Ever since the black polo with yellow stripes (which sells for $90 at some stores) became part of the Proud Boys uniform—a phenomenon known as “hatejacking”—Fred Perry, the British streetwear brand, has struggled to disassociate itself from far-right toxicity. The company published a lengthy statement calling the appropriation “incredibly frustrating” and noting that lawyers had been summoned to stop any “unlawful use of the brand.” Two years later, the statement remains, and so does the association between the Proud Boys and their shirt of choice. Fred Perry’s struggle is hardly a new one. Though it been embraced by various strains of counterculture, Dr. Martens, the British footwear brand, has never fully shed its association with Nazi skinheads. More recently, New Balance raced to distance itself from white supremacists after a neo-Nazi blogger declared the brand the “official shoes of white people,” according to the Washington Post.

Reached by email, Buc-ee’s declined to reveal whether the company was previously aware that its face masks were being worn by members of the Proud Boys. “We have never had contact with these people and do not know who they are,” Jeff Nadalo, the general counsel of Buc-ee’s, told Texas Monthly, adding: “No third party is going to prevent us from providing clean bathrooms equally to all people.”

Andrew Marantz, a journalist who has studied how far-right propagandists game popular culture, said this kind of appropriation can catch even the most successful brands off guard. The author of Antisocial: Online Extremists, Techno-Utopians, and the Hijacking of the American Conversation, Marantz said that well-meaning brands—which at times initially struggle to grasp the nuanced political context presented by far-right fads—can find themselves in an exceptionally difficult situation when their products are co-opted by groups they abhor. It’s not unlike being caught in quicksand. Pushing back too forcefully, Marantz said, especially early on, risks looking “pearl-clutchy,” which can draw even more attention to the propagandists. Your brand continues to sink as your association with hate speech blossoms online. On the other hand, pushing back too gently can backfire as well. “Many of these groups are used to being disavowed, so they’ll actually take a weak disavowal as encouragement, the same way the Proud Boys did when Donald Trump told them to ‘Stand back and stand by,’” Marantz said.

As far as the Bucky the Beaver mask is concerned, Marantz said it offers a particular blend of signals that the far-right loves to glom on to—something comical yet creepy in the context of body armor; familiar yet distinctive. When the far-right, AR-15–toting Boogaloo Boys began wearing Hawaiian shirts at rallies in the early days of the pandemic, for instance, the attire was understood in far-right circles to signal that a new American civil war—or “Boogaloo”—was fast approaching.

A grinning-beaver mask might seem too absurd to take seriously. But Marantz said that sort of reaction misses the broader picture. When some Americans encounter far-right groups for the first time, their reaction is to categorize them in a binary fashion as either “loser clowns” or “malevolent autocrats.” “My response is: why can’t it be both?” Marantz said. “Throughout history, the forces that have tried to work against democracy and pluralism have come off as clowns or jokers or losers or fundamentally unserious people. It doesn’t mean they aren’t trying to achieve what they’re trying to achieve and that they haven’t been successful at doing so in the past.” Early in his career, Benito Mussolini, for one, was often dismissed as a clown—until his violent brownshirts elevated him to power as the fascist dictator of Italy.

The Proud Boys, however, may have overplayed their hand this time. Texans are famously loyal to their favorite brands, and thus unlikely to hand over a beloved symbol of spotless restrooms, fresh brisket tacos, and sixty-pump gas stations without a fight. After seeing a video of the Proud Boys wearing beaver masks in Denton, one Redditor captured what is becoming a growing sentiment: “How dare they disrespect Bucky like that.”