Tex-Mexplainer: What Are Gorditas? 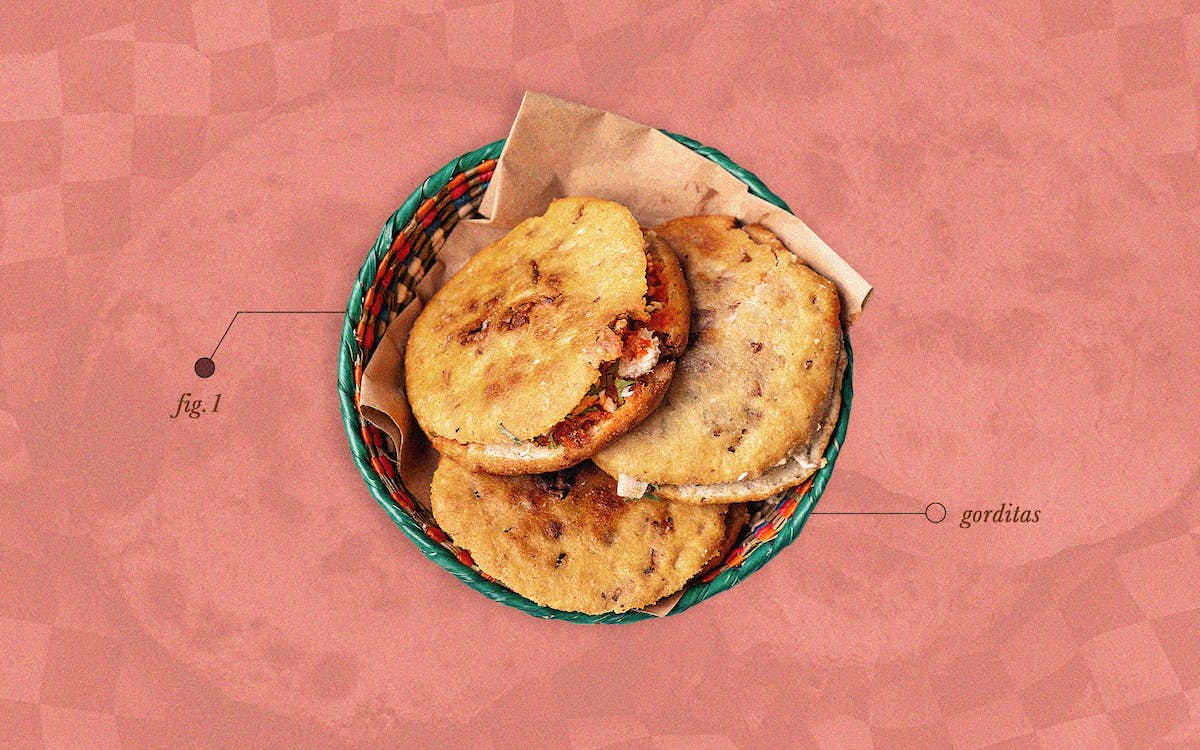 The Tex-Mexplainer series explores the ingredients, techniques, history, and culture of Mexican food in Texas.

There are three Gorditas y Sopes Samborn’s within one block of one another in San Luis Potosí, Mexico. Two are on the same block, a scant storefront apart, and the third shop is around the corner. On a late morning this August, all three were bustling with diners who marked the gordita filling they wanted on a paper menu. Runners barked the orders to the kitchen staff, struggling to be heard over the customers exclaiming their wonder at the impossibly thin gorditas. The dark yellow corn discs are cut open on one side to resemble pouches, and they are filled with chicharrones, nopales, eggs, and shredded meat, among a variety of other options. At each Samborn’s, several women in red aprons or red polos work the masa, grill the gorditas, and carefully ladle in the guisos (fillings) without tearing the pouches.

I visited two of the three shops with my traveling partners and friends, Nick Zukin, former owner of the now-closed Mi Mero Mole taqueria in Portland, Oregon, and Francisco de Santiago, a tour guide for Culinary Backstreets CDMX. We had journeyed north from Mexico City to San Luis Potosí for gorditas and were awarded with a bounty. The gorditas at Samborn’s (not to be confused with Mexico’s Sanborns department store–cafeteria chain) were especially memorable. Why were they so thin? How did they maintain their integrity while carrying the weight of silky mole mixed with chicken or ground beef picadillo studded with potatoes?

The owner of Samborn’s 2 and her grown daughter, stationed behind the register, explained that their shop was established as a tortilleria, but area college students kept requesting gorditas for a quick, inexpensive snack. Eventually, the owner gave in to the pressure. “Of course we’re the best location,” her daughter added with a laugh.

About an eight-hour drive north of San Luis Potosí, in the Texas border town of McAllen, 110-year-old El Pocito also serves up stellar gorditas. Customers enter El Pocito through alley-facing doors. Inside is a room with a molino to grind the corn, flattop griddles, and a cash register. The room is tight and hot with elderly women working every station. There is barely enough room to order or pay, much less to linger to review the hanging menu before more customers squeeze into the space. And it’s no wonder the crowds flock: its gorditas open up a wide world of glorious masa possibilities.

Samborn’s and El Pocito, approximately 430 miles apart, hint at that jaw-dropping variety of these round treats. Gorditas are as affordable and versatile as tacos but have so far lived in their shadow. Gorditas deserve a spotlight. “Gorditas are the sexy, fabulous, chubby cousin of the taco,” says Regino Rojas, owner of Revolver Taco Lounge in Dallas. “It doesn’t matter what you put in them. She has the attitude, she has everything.” He recounts how his mother, Juanita, would make gorditas as after-school snacks.

Rojas hails from the Mexican state of Michoacán, where some gorditas are referred to by Indigenous names, including the yururichúskuta, whose masa is mixed with piloncillo. The unrefined brown sugar is a staple of Mexican cooking that often shows up in café de olla. Another regional gordita is the ichúskuta, which is filled with beans. Rojas also reminisces about mushroom guisados (stews) packed into gorditas. “They’re gorgeous, but they’re not very common,” he says.

Years ago, I attended a special dinner featuring Dallas taqueros. Rojas served an enclosed, unfilled gordita made of flour—this variety is also rare. But they are exquisite at Gorditas Mi Torreón in San Antonio, where owner Vanessa Mota, originally from the namesake northern city, oversees gorditas cooked on a griddle or grilled over charcoal. I opted for a flour gordita cooked over the coals and served with picadillo, ground beef punctuated with cubed potatoes. The richness of the filling, along with the subtle firmness provided by the potatoes, played against the slight sweetness from the thick, charred masa.

In Dallas’s southeast neighborhood of Pleasant Grove, Tortilleria La Potosina also sells plenty of gorditas. Co-owner Julio Infante says the small, fat masa cakes are a required menu item, noting their regional popularity in his native San Luis Potosí. “We make everything from San Luis, and it has to be made by hand,” he said. I could gorge on them until I too was completely round and stuffed. But it’s the bocoles—gorditas made with lard-infused masa, from the La Huasteca region of San Luis Potosí—that have my heart. Their exteriors are fluffy and luxurious, and I love to fill them with rajas con queso, roasted poblano chiles stewed in cheese and cream. They are yet another wonderful entry into the world of gorditas.

As co-owner and executive chef of Austin’s El Naranjo, Iliana de la Vega stresses that Mexican cuisine is complicated and varies from state to state or town to town. “In some places, gorditas are just masa cakes, small, medium, or large, that can be already mixed with other ingredients or can be stuffed,” she says. “But they are also fun as normally any version of gorditas, if they are good and properly executed.”

All the chefs and taqueros I interviewed for this story repeated the same sentiment: gorditas are comfort food. De la Vega perhaps put it best, saying, “It’s a piece of heaven, full of flavor (only if the masa is good) and satisfying.” She went on to recount a childhood memory of growing up in Mexico City. “I remember going with my mom to the Mercado de San Juan,” she says. “Around the corner there was a window where gorditas de chicharrón or cheese were being sold. My mom used to get one for herself and bought me one. It was a special shared moment with my mom.” That memory is evoked in the nixtamalized blue corn gorditas at El Naranjo. They’re small, completely closed, and topped with a loose bramble lettuce, pico de gallo, salsa, cheese, and crema. The mess will get on your fingers as you eat it, but it will be worth it. One bite reveals the luscious filling of chicharrones, which leads to a moment of blissful silence. As de la Vega says, a great gordita—large, tiny, enclosed, thin, made of corn or flour—stays with you.