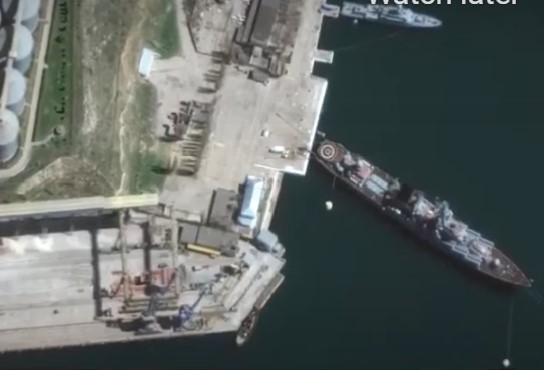 There are two competing accounts as to what happened to the Russian “flagship of the Black Sea fleet,” the Moskva (“Moscow”). There is the Ukrainian account, and there is the Russian account. However, both stories merge in agreement that the Moskva now sits at the bottom of the Black Sea, sunk as it was being towed toward a Russian naval port in a desperate attempt to fix the highly symbolic ship. An after-action report to get an accurate assessment would require a submarine that no one wants to send right now.

The Russians say that a fire started aboard the ship and set off some of the munitions. U.S. experts say it is possible. The Russians have said many things about the Ukraine war, most of it in the form of lies and propaganda. One can be forgiven for doubting the Russian story.

One can also be forgiven for believing (and wanting to believe) the Ukrainian version of events:

According to Ukrainian officials, its military targeted “Moskva” with Turkish-made Bayraktar drones to take out the ship’s radar system, and followed it up with a missile strike.

The ship was allegedly hit with two “Neptune” cruise missiles. The missiles, which were developed by Ukrainians and entered service in August 2020, have a range of around 300 kilometers (186 miles) and can carry warheads of up 150 kilograms (over 330 pounds).

Sounds correct. Especially when, if one really concentrates on it, both stories can be entirely accurate. The Russians might have just left out what started the fire.

Given that there was cloud cover over the region, U.S. Satellites could not determine exactly what happened (Or the United States does not want the world to know that it can tell what happened despite the cloud cover). It sounds like the Russians doubt their own government’s explanation because the blow delivered painful news to the Russians, who held the ship up as highly symbolic of what was presumed to be the mighty Russian navy.

CNN’s incomparable Brianna Keiler interviewed Andrey Illarionov, the former chief economic adviser to Vladimir Putin, to ask him about the impact of the loss of the ship. The impact is significant: (VIDEO BELOW)

It is incomparably more important from the point of view of symbolic significance because it is number one ship in the Black Sea Fleet, it is the largest one, it is a ship that has been used by Putin personally all the time when he visited Sevastopol and Black Sea Fleet and participated in all these Navy parades. It was the same ship that sank several Georgian boats during the Russian/Georgian war back in 2008. It was the same ship that attacked Snake Island in the beginning of this particular war. And the reaction of the Ukrainian soldiers to this attack became viral in social media and around the world.”

Putin used the ship in the area. It sunk. The Ukrainians may well have sunk it, so It matters. The symbolism is too perfect.

“It is also interesting that that particular ship has been built in Mykolaiv, in Ukraine, in the largest shipbuilding plant in the former Soviet Union.

“It is interesting it has been hit by missile from same area, from Mykolaiv. It is a lot of symbolism in this case. And certainly it has name Moskva, the capital of Russia, so this is a very, very painful blow to the morale, and the status of the Russian Navy and the Russian Army.”

Let’s just hope that the symbolism continues to grow in the near future. The Ukrainians (Or the hapless Russians) have already sunk the mighty Moskva. Now, if the Ukrainians can just sink Putin’s reign as the president of Russia, Russia might surface as a country whose best days lie in the future, unlike the ship.

Russia might do well to find a carrier like President Zelensky to bring peace, freedom, and democracy to Russia.