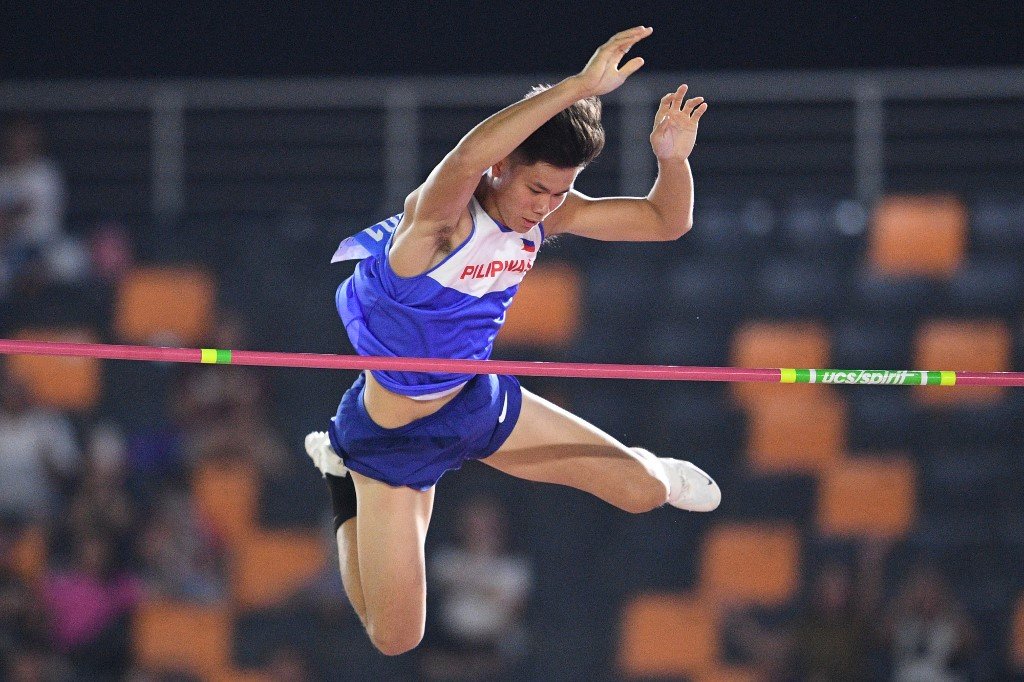 Ernest John Obiena from the Philippines clears the bar in the men’s pole vault athletics event at the SEA Games (Southeast Asian Games) in the athletics stadium in Clark City, Capas, Tarlac province north of Manila on December 7, 2019. (Photo by TED ALJIBE / AFP)

The Filipinos expect to be in contention for the golds Saturday in the pole vault and javelin, where Obiena and Melvin Calano are the defending champions, respectively; the 200 meters, where the Richardsons are entered as a substitute to injured Olympian Kristina Knott; and possibly, the medley relays, too.

“The chances of the entire Philippine team looks good, the prospect is also good, the feeling of the entire team is very positive,” said coach and athletics team spokesperson Joeffrey Chua. “It is because we are prepared, we started our preparation last October non-stop. October, November then we completed our first competition last December in Baguio.”

“Then, we had one international meet last month in Singapore, so all in all five good competitions just to prepare for the SEA Games, so their movements are very sharp and their skills are above expectations,” added Chua.

Leading the charge of the team is Obiena, who is obviously a cut above the rest in the pole vault competition here, after a 5.45-meter leap during the 2019 Philippine SEA Games. Since that gold-medal feat, Obiena has literally improved by leaps and bounds with a personal best of 5.91, achieved during the Meeting de Paris at the Stade Charlety, Paris on Aug. 28 last year.

But the 26-year-old Olympian isn’t about to be complacent.

“Everybody’s gonna be subjected to the same situation, we’re all jumping against the wind, so it’s all the same. Just here to do my job, try to win that medal. Bring it back home and hopefully bring some glory back to the country,” said Obiena.

“I lost a lot of time (preparing), but I’m ready to give my all. The Thai guys are preparing and are competitive as well, they’re ready. This is the biggest competition for them this season. We’ll see what I can do,” added Obiena.

Even his father/coach Emerson agrees.

“Those from Thailand also won bronze Asian games, the competition will be good,,” said the elder Obiena, referring to Patsapong Amsam-Ang, the 2018 Jakarta Asian Games bronze medalist, who upset Obiena for a podium finish.

Meanwhile, Kyla Richardson is tipped to win the gold after sweeping her three events, in the 100-meters, the 200-meters, and the relays of the 2022 PacWest Track & Field Championships recently at the Point Loma Nazarene University in San Diego, California.

Her chances are good with top Vietnamese sprinter Le Tu Chinh out of contention due to a foot injury, a similar condition that kept Knott from joining.

The four of them claimed the silver medal back in 2019, behind Thailand.