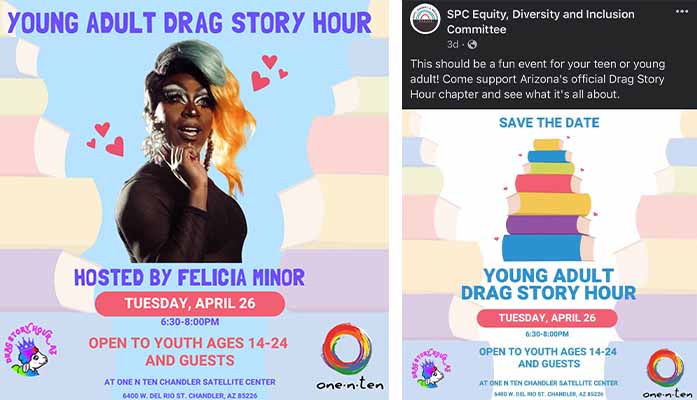 Parents are questioning the decision by the Scottsdale Parent Council (SPC) to encourage their children to support “Arizona’s official Drag Story Hour” chapter by attending its April 26th event.

The call to action by the SPC’s Equity, Diversity, and Inclusion Committee is just the latest controversy generated by the group. However, critics say, few should be surprised by the move considering Committee member Jill Lassen has been “aggressively pushing the groomer agenda.”

This isn’t the first time Lassen has stirred up controversy and alarmed parents. Last week, she and a fellow Committee member Stuart Rhoden accused an African American DJ of wearing blackface during a charity event for the Scottsdale Unified school district.

The DJ, Koko Kim Hunter, a black man, was not wearing blackface.

Lassen raised eyebrows last year when she complained in a Drag Queen Story Hour Zoom discussion that it was difficult to bring the Drag Queens to school because “it is much harder at the school level as far as the parents having a lot of say and clout with the District unfortunately.”

By and large, parents are uncomfortable with the sexualization of the “Love for Reading” campaign. According to the founders of Drag Queen Story Hour, its stated mission is to “instill the imagination and play of gender fluidity of childhood and gives kids glamorous, positive, and unabashedly queer role models.”

As previously reported, Lassen, who has earned a reputation for her abusive behavior towards other parents she refers to as “super-rich White Karens,” serves as a co-chair for the SPC DEI Committee. The Council is an organization, according to District sources, created to support the administration’s agenda and all of its policies and practices.