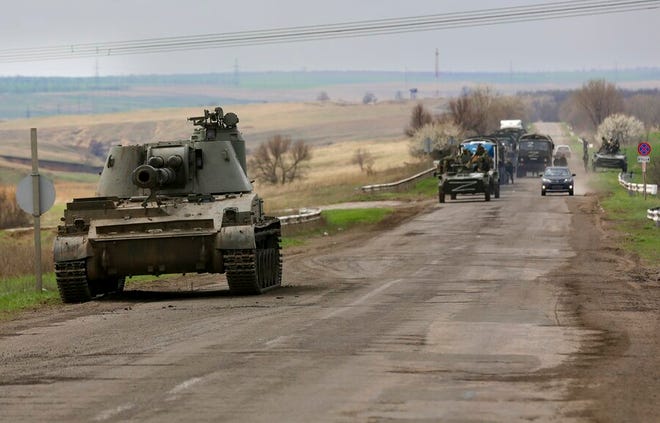 “Now we can already state that the Russian troops have begun the battle for the Donbas, for which they have been preparing for a long time,” he announced Monday in a video address.

He said a “significant part of the entire Russian army is now concentrated on this offensive.”

He vowed: “No matter how many Russian troops are driven there, we will fight. We will defend ourselves. We will do it every day.”

Russia bombarded the western city of Lviv and numerous other targets across Ukraine on Monday in what appeared to be an intensified bid to grind down the country’s defenses while building up its own forces for a major ground offensive in the east.

At least seven people were reported killed in the missile strikes on Lviv, a city close to the Polish border that has seen only sporadic attacks during almost two months of war and has become a haven for civilians fleeing the fighting elsewhere. To the Kremlin’s increasing anger, Lviv has also become a major gateway for NATO-supplied weapons.

In other developments, a few thousand Ukrainian troops, by Russia’s estimate, remained holed up at a mammoth steel mill in Mariupol, the last known pocket of resistance in the devastated southern port city.

And Ukrainian President Volodymyr Zelenskyy submitted a filled-out questionnaire in the first step toward obtaining membership in the European Union – a desire that has been a source of tension with Moscow for years.

The Russian attack on Lviv hit three military infrastructure facilities and an auto shop, according to the region’s governor, Maksym Kozytskyy. He said the wounded included a child.

A Lviv hotel sheltering Ukrainians who had fled the fighting in other parts of the country was also badly damaged, Mayor Andriy Sadovyi said. The city has seen its population swell with elderly people, mothers and children trying to escape the war.

“The nightmare of war has caught up with us even in Lviv,” said Lyudmila Turchak, who fled with two children from the eastern city of Kharkiv. “There is no longer anywhere in Ukraine where we can feel safe.” 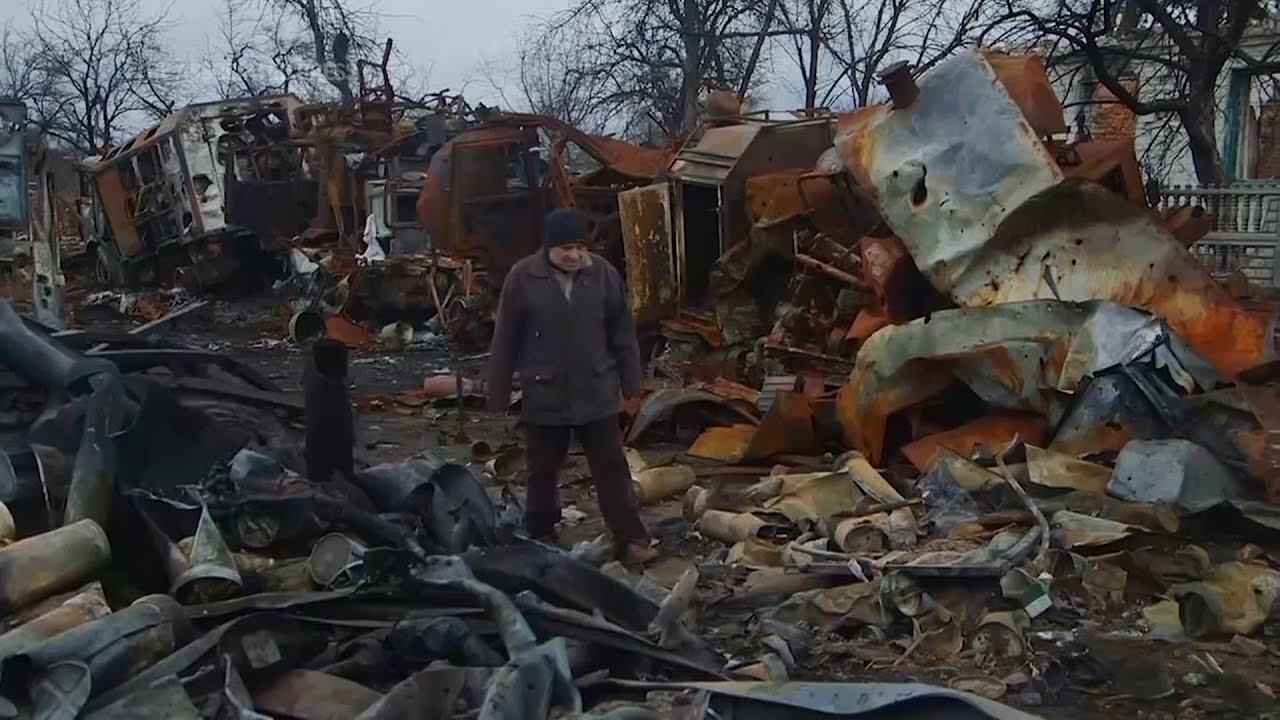 Lviv, the biggest city and a major transportation hub in western Ukraine, is about 80 kilometers (50 miles) from Poland, a NATO member.

Russia has strongly complained about the increasing flow of Western weapons to Ukraine and warned that such aid could have consequences. On Russian state media, some anchors have charged that the supplies amount to direct Western engagement in the fight against Russia.

A powerful explosion also rocked Vasylkiv, a town south of the capital of Kyiv that is home to an air base, according to residents. It was not immediately clear what was struck.

Kharkiv, Ukraine’s second-largest city, was hit by shelling that killed at least three people, according to Associated Press journalists on the scene. One of the dead was a woman who appeared to be going out to collect water in the rain. She was found with a water canister and an umbrella by her side.

Military analysts say Russia is increasing its strikes on weapons factories, railroads and other infrastructure ahead of an expected assault on the Donbas, Ukraine’s mostly Russian-speaking industrial heartland in the east. The Kremlin has declared the capture of the Donbas its main goal since its attempt to storm Kyiv failed.

Moscow said its missiles struck more than 20 military targets in eastern and central Ukraine in the past day, including ammunition depots, command headquarters and groups of troops and vehicles.

It also reported that its artillery hit an additional 315 Ukrainian targets and that warplanes conducted 108 strikes on troops and military equipment. The claims could not be independently verified.

Gen. Richard Dannatt, a former head of the British Army, told Sky News that Russia is waging a “softening-up” campaign ahead of the Donbas offensive.

“We are doing everything to ensure the defense” of eastern Ukraine, Zelenskyy said in his nightly address to the nation on Sunday.

A senior U.S. defense official, speaking on condition of anonymity to discuss the Pentagon’s assessments of the war, said there are now 76 Russian combat units, known as battalion tactical groups, in eastern and southern Ukraine, up from 65 last week.

That could translate to around 50,000 to 60,000 troops, based on what the Pentagon said at the start of the war was the typical unit strength of 700 to 800 soldiers, but the numbers are difficult to pinpoint at this stage in the fighting.

The official also said that four U.S. cargo flights arrived in Europe on Sunday with an initial delivery of weapons and other materials for Ukraine as part of a $800 million package announced by Washington last week. And training of Ukrainian personnel on U.S. 155 mm howitzers is set to begin in the next several days.

Ukraine halted civilian evacuations for a second day on Monday, saying Russian forces were shelling and blocking the humanitarian corridors.

Deputy Prime Minister Iryna Vereshchuk said Ukraine had been negotiating safe passage from cities and towns in eastern and southeastern Ukraine, including Mariupol and other areas in the Donbas. The government of the Luhansk region in the Donbas said four civilians trying to flee were shot and killed by Russian forces.

Vereshchuk warned Russia on social media: “Your refusal to open these humanitarian corridors will in the future be a reason to prosecute all involved for war crimes.”

The Russians, in turn, accused “neo-Nazi nationalists” in Mariupol of hampering the evacuation.

The capture of Mariupol, where Ukraine estimates 21,000 people have been killed, is seen as key, and not just because it would deprive Ukraine of a vital port and complete a land bridge between Russia and the Crimean Peninsula, seized by Moscow eight years ago.

The U.S. defense official said that if Russian forces succeed in taking full control of Mariupol, that could free up nearly a dozen battalion tactical groups for use elsewhere in the Donbas.

Meanwhile, a pro-Russian Ukrainian politician who was arrested last week on a treason charge appeared in a video offering himself in exchange for the evacuation of Mariupol’s trapped defenders and civilians.

It was not clear whether Medvedchuk was speaking under duress.

Associated Press journalists Nico Maounis and Philip Crowther in Lviv, Ukraine, Adam Schreck in Vasylkiv, Ukraine, and Robert Burns in Washington contributed to this report, as did other AP staff members around the world.