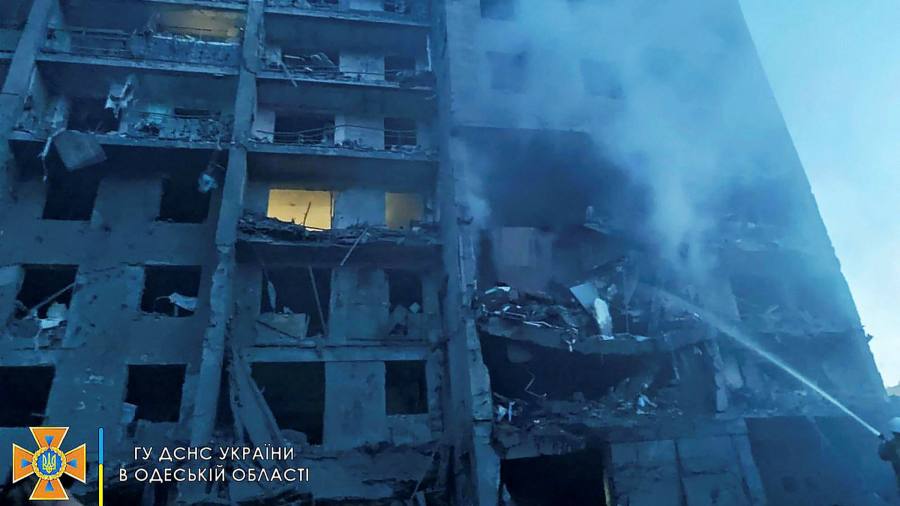 The latest missile strikes came a day after Ukraine said its bombardment had forced Russian troops to abandon Snake Island, a strategic outpost in the Black Sea close to Odesa that had been seized by Russia early in the war. Moscow said its withdrawal had been a “gesture of goodwill”.

Kyrylo Tymoshenko, a senior official in President Volodymyr Zelenskyy’s office, said 18 people had been killed in the strikes near Odesa, including two children. Another 30 were wounded.

“Terror is a common tactic of Russia,” said Tymoshenko on his Telegram channel. “First, they cover their criminal actions with an ‘act of goodwill’, and then launch rocket attacks on our peaceful cities.”

The latest attack will damp hopes that Russia is ready to end its blockade of Ukrainian seaports and allow grain exports through the Black Sea, amid concerns about global food shortages caused by Moscow’s invasion.

The strikes near Odesa marked another escalation in a week of Russian attacks on civilian targets across Ukraine, some of them hundreds of miles from the conflict raging in the east of the country.

Russia fired more than 40 rockets at cities in Ukraine last weekend, including a cruise missile strike that hit a residential building in central Kyiv.

On Monday, a rocket struck a shopping mall in the central Ukrainian city of Kremenchuk, killing more than 20 and demolishing the building. On Friday, Russia missiles again targeted the southern city of Mykolayiv, according to its mayor Vitaliy Kim.

Ukrainian officials said the missile strikes near Odesa struck at 1am, destroying the first to ninth floors of a residential building and damaging a recreation centre in the town of Serhiyivka, in the Bilhorod-Dnistrovsky district.

Images posted on social media showed emergency workers trying to rescue people from the rubble left by the collapsed buildings.

The latest attack comes just days after Zelenskyy implored western countries to provide Ukraine with more aerial defences, amid signs that Moscow is seeking to widen the conflict again as it makes incremental gains in the east.

Ukrainian forces in recent days retreated from the eastern frontline city of Severodonetsk under heavy Russian artillery fire and are battling to keep hold of Lysychansk, the last city in the Luhansk region still under Kyiv’s control.