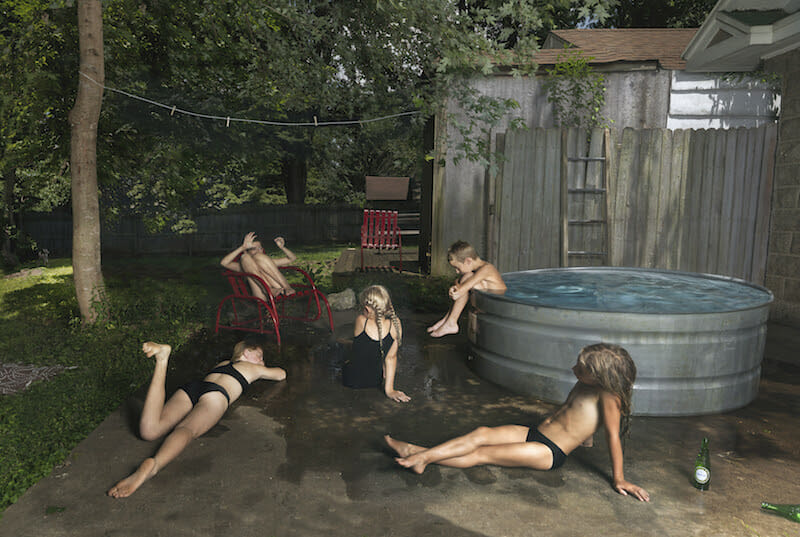 For most of her career, photographer Julie Blackmon has made art out of seemingly nothing and surprisingly out of nowhere. A mother of three and the oldest of nine siblings, she lives in middle America, in Springfield, Missouri. “You won’t think there is anything interesting here, but I found it not to be the case,” she says.

Her work, currently on view at Jackson Fine Art through July 23, is testament to the fact that a creative vision can turn everyday happenstance into magic. Through her lens and the algorithms of Photoshop, she has successfully created a fantastical universe that explores the chaotic life of her family, her sisters and their families.

As poet Billy Collins writes beautifully of her work, her “photographs, taken together, form a paracosm, an imaginary world the viewer can enter like the oddly fleshed out worlds of Oz and Wonderland.”

Her images often possess a tender humor but they are consistently uncanny and suffused with subtle darkness. Compared to the images published in her latest book Homegrown, which is already sold out, the majority of the work presented at Jackson Fine Art has a relatively upbeat feel.

The exhibit takes its title from one of her latest photographs, Metaverse (2022), which depicts a surreal scene: Five children are left to play, or to simply be bored, as is the case of the youngest, who is looking desperately through his Oculus headset, as if ready to step out of his virtual-reality space.

For this photograph as well as most of those drawn from two of her latest bodies of work, Domestic Vacations and Homegrown, Blackmon got her inspiration from the painting of 17th century artist Jan Steen and other Dutch and Flemish genre painters. Blackmon refers in her artist statement to the Dutch proverb “a Jan Steen household” which is used today to “refer to a home in disarray, full of rowdy children and boisterous family gathering.”

But unlike most of the Dutch paintings, children in Blackmon’s world always take center stage and adults are rarely present. “This work is not about the kids; it is about the absence of the adults, the chaos and crazy scenes, as a metaphor for the stress that we feel in today’s culture,” she insists.

At times, her images are more contemplative and less chaotic, as in Bathers (2019), where children sit around a metal tub, somewhat lethargic. It is not so much the absence of chaos or the fact that a few empty beer bottles are scattered on the ground that intrigue, but more the overall composition, the subtle positioning of the kids in their black swimsuits contrasting with their pale skin tone, bleached out by the light of a strobe.

Her images are both fictional and autobiographical and we respond to them because they offer a satiric commentary of our life. “I did not want to do pictures that people like to look at. I want to say how I felt about our life,” she writes. This is particularly true in Costco (2021), where Blackmon stages a white minivan after a shopping spree, humorously leaving a big pack of red meat in the parking lot and a huge bear on top of the van next to two super-sized boxes of Cheez-Its, all of which can be read as a metaphor for America’s consumerism. To the left, cut halfway out of the frame, an unattended child is left sitting in a shopping cart, creating an uneasiness in the viewer as to whether he or she could be harmed.

This way of leaving an object or person half out of the frame is a strategy that Blackmon uses repetitively in her photographs, starting early in her career. In Loading Zone (2009), a beautiful composition reminiscent of a Helen Levitt photograph, a child has thrown himself in the back of a green vintage car, only half visible on the right of the frame. The rest of the scene is somewhat chaotic, populated with three young toddlers frolicking in a blighted street.

Blackmon’s photographs act like tableaux vivant, or living pictures, offering a plethora of details to consider. They force the viewer to look around the frame in an attempt to decipher all possible narratives. Blackmon says her images start with the little moments, the ones perceived in the street as you drive by, or those observed within a mundane family situation, even a gesture. “It’s a fun perspective to have . . . to see the world around you as a potential story or idea. It changes how you see things,” she notes.

But her photography is all but realistic. She works in the same cinematic vein as Gregory Crewdson, recreating scenes with both natural and artificial light, and art direction, using friends and family as her actors – as seen in this video.

“Like writers have always known, fiction can sometimes tell us the truth better than the truth itself,” she comments. This adage feels true to her visual work. Even though her images capture the reality of domestic life, they transcend the mundane by fusing fantasy and reality and, in the process, elevate the present moment to mythic proportions.

Virginie Kippelen is a photographer, multimedia producer and writer specializing in editorial and documentary projects. She has contributed to ArtsATL’s Art+Design section since 2014, writing mostly about photography. And after living 25 years in the United States, she still has a French accent.