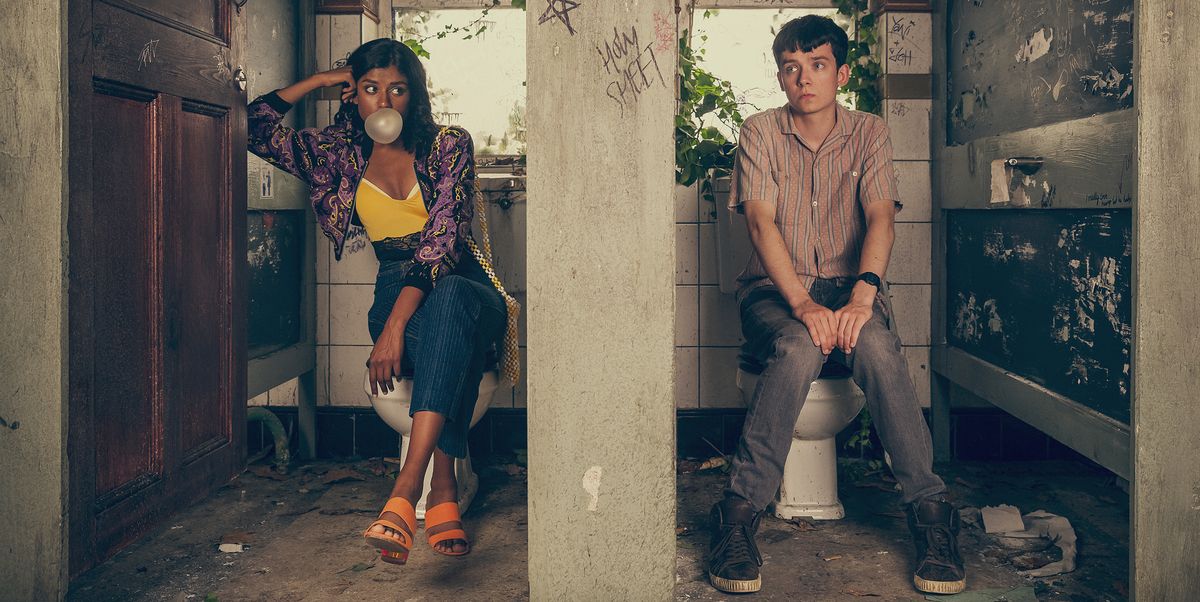 Spoilers below for season 3 of Sex Education.

Netflix’s beloved raunchy teen drama, Sex Education, has finally returned for an expectedly colorful season 3, which picks up right where the second installment left off. Eric (Ncuti Gatwa) and Adam (Connor Swindells) are navigating the terms of their new romance. Maeve (Emma Mackey) and Otis (Asa Butterfield) are not on speaking terms. And Jean (Gillian Anderson), Otis’ mother, is struggling to conceal an unplanned pregnancy from her ex-boyfriend, the icy blue-eyed Jakob (Mikael Persbrandt). By the end of the eight episodes, we have just as many questions as answers to how these burgeoning relationships will play out—but we do have one thing: Otis and Maeve have finally revealed their true feelings for each other. Pull out the rose petals and champagne!

Well, hold up a moment. Problem is, Maeve is USA-bound for a once-in-a-lifetime study abroad opportunity, which leaves the young lovebirds winging it from separate corners of an ocean. Otis makes it clear that, when Maeve returns, he’ll be waiting. But he’s a teenager, and teens have never been particularly good at keeping promises.

Meanwhile, Adam and Eric are in an equally confusing headspace. They’ve broken up, and it’s clear Adam needs some lengthy therapy sessions to process all the years he spent in the closet. That doesn’t mean this ship is without a sail, however: Eric seems willing to reconcile after his exe has had some time to heal.

As for Otis’ mother, well, that’s a whole other story. For most of season 3, Jean is heavily pregnant, but she eventually delivers a bouncing baby girl…only to learn via DNA test that the baby’s father is, uh, unknown. With that little cliffhanger keeping us slack-jawed, there’s little question Netflix is hoping to green-light a season 4. Here’s what we know so far about another term for Moordale’s best and brightest.

Will there be a season 4 of Sex Education?

When first asked if he knew of any season 4 whispers, Butterfield told Cosmopolitan in September: “We don’t know [whether there will be more]. It’s out of our hands at this point. I wish I could tell you more; I genuinely don’t know.” Later, he and Gatwa revealed in an interview with ELLE that they did, however, want more episodes. In particular, Butterfield is hoping to see where Maeve and Otis’s relationship goes, and how the two of them navigate life without being so worried about their romance. “I would like to see them…look at the bigger picture,” he said. “To explore themselves and to be more focused either on their relationship with themselves or their platonic relationships with their friends and family.”

When will season 4 premiere?

Considering the gap between seasons 2 and 3 lasted almost two years, largely due to filming delays from the coronavirus pandemic, it’s possible a fourth season could arrive sooner—perhaps as early as late 2022.

What will season 4 be about?

Season 3 ended with an enormous question mark, so surely season 4 will seek to tie up loose ends. It’s also expected that Maeve will return from the states—perhaps with an American accent?—and rekindle her romance with Otis. Or not.

Is Simone Ashley coming back?

Ashley, who stars as Olivia Hanan in Sex Education, has risen to super-stardom after leading Bridgerton‘s second season, which arrived in March 2022. Unfortunately, though, that means she won’t be coming back for SE season 4 given her new commitments to the Regency drama. She confirmed the news on ITV’s This Morning. “I get asked that all the time,” Ashley said. “No, I mean, I’m a Bridgerton girl now.”